How her business helps Pushpa in sustaining her family | Milaap

How her business helps Pushpa in sustaining her family

A major part of India’s economy lies in its rural areas. And the fact that India is witnessing a rise in the number of women micro-entrepreneurs is highly commendable. I didn’t fail to notice this when I visited the heart of India: the state of Madhya Pradesh, located in the central region of the country. I was in the district of Alirajpur to check on the progress of Ekta Mahila Samuh, a group being led by Pushpa Shakla, after they had borrowed a loan from Milaap for expanding their respective micro businesses.

Pushpa has been running her micro business of selling snacks for almost three years now. She sells snacks in the neighborhood by driving down her little cart. And she could buy this little cart of hers with the loan from Milaap. Previously, she found it difficult to move around with all the goods she sold. It was quite an onerous task. But buying this cart has helped her hugely. Her income has significantly increased.

Pushpa's husband who is a carpenter tends to work when there is a demand for his services. So the family income isn’t stable. Pushpa’s income helps in sustaining the family, and is also one of the major sources to fund the education of her children.

With this business of hers, she is now daily able to earn a sum of Rs. 400 to Rs. 500. Her elder son assists her in buying the stock and also with the management part. She has already started repaying the loan. And she intends to expand this business further. 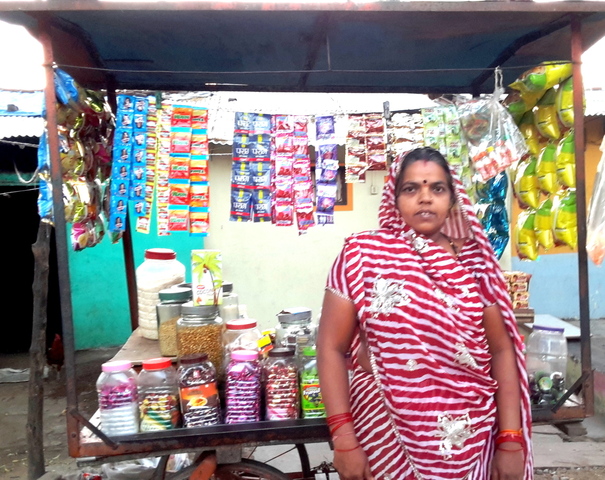 Pushpa and her cart of snacks