How Bhikiben became the proud owner of her 20th cow | Milaap

How Bhikiben became the proud owner of her 20th cow

As I stepped out into the searing sunlight, I looked up and found that the scorching heat had colored my vision everywhere. The journey had been wearingly long. I had finally reached Bhachau after travelling about 300 kms.  Bhachau is a small town located in the Kutch district of Gujarat; a town that is known for its rural women entrepreneurs engaged in various distinctive businesses such as embroidery, selling spices and vegetables, and most importantly, the dairy business.

I was accompanied by my staff members, who were all in pretty high spirits. I was here to check on the progress of Jay Goga Mahila Mandal, a Joint Liability Group, being led by Mojiben, after they had been provided with the necessary funds by the Milaap community of lenders to grow their respective microenterprises. Mojiben was too occupied with work that day, so instead of her, I met one of the other members of the group.

As I progressed towards Bhikiben’s house, I could see a row of tent houses in the vicinity. These temporary shelters were made up of galvanized iron sheets and bamboo sticks. The dwellers in this particular area of Bhachau are used to living in this certain way. As most of them own livestock, this seems suitable to them.

Bhikiben has been running her traditional family business of dairy for 10 long years now. Despite the unfavorable living conditions, she kept on working hard. Now she is the proud owner of 20 cows. With the loan from Milaap, she could buy her 20th cow, one that helped her in increasing her income to a huge extent. Now she is able to save a sum of Rs. 6000 on a monthly basis. And this is highly remarkable as it is five times more than what she was able to save earlier. She expressed her gratitude for the loan provided and how helpful this had been to her.

Bhikiben intends to grow her business further, so that she can provide the best of education to all three of her children. 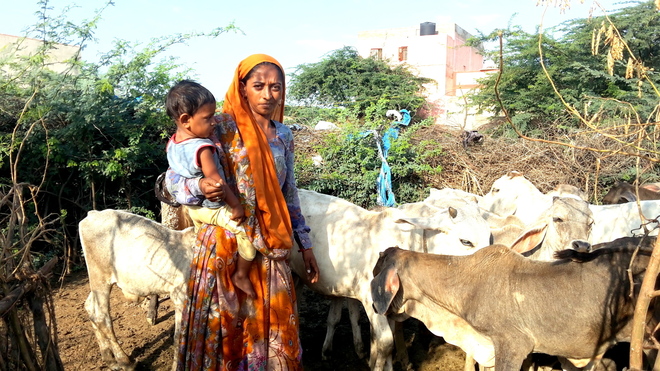 Bhikiben standing in the midst of her cows