Every 20 Days, Himanshi’s Stomach Fills Up With So Much Water That She Can Hardly Move | Milaap
loans added to your basket
Total : 0
Pay Now

Every 20 Days, Himanshi’s Stomach Fills Up With So Much Water That She Can Hardly Move

Shares
Shares
Share on whatsapp
Himanshi’s birth was very special for the entire Patel family. She was the first girl in the entire family and they were all thrilled with this happy and talented child. But last year, Himanshi was diagnosed with a rare disease that has damaged her liver and things took a complete wrong turn from there.

The family lives in a small village in Uttar Pradesh. Bhairam Patel, Himanshi's father works in Chattisgarh and he decided to take her to a doctor there. That was when Himanshi was first diagnosed with Wilson's Disease. The disease results in a build-up of copper in the body. The worst part is that it affects the liver, kidney and brain. The doctors hoped that medicines might help the seven-year-old.

Medicines only made the condition worse

In just one month, the prescribed medicines stopped working. Little Himanshi had to be taken to the doctors again because her body was swelling up. The doctors in Chattisgarh immediately asked Bhairam to take his daughter to Apollo Hospital, Hyderabad. Little did Bhairam know what was waiting for him there. Doctors there told him that the disease had already progressed too much. The swelling of the body, specifically the stomach, was due to water getting collected which is a sign of liver failure.


“My only daughter who brought so much happiness to our lives, is suddenly so sick and is refusing to get up from bed. Every visit to the hospital is making her more and more weak. She is tired and is in pain. Her loud laughter has turned into a painful smile.”

Bhairam who works in a very low post in the Chattisgarh Police department belongs to a family of farmers. He is responsible for the financial needs of a family of nine members. Although Bhairam can apply an advanced salary it is still far from enough to cover the treatment of his child.

His younger brother who works as a farmer in Uttar Pradesh, isn’t able to help him financially either. Since Himanshi’s diagnosis, Bhairam has already spent Rs 2 lakhs that he needed to borrow from his friends and relatives. His meager income is not enough for both the needs of the family and treatment of his only daughter.


“When the doctors finally found that Himanshi’s grandmother’s liver suitable for her, we saw a ray of hope. I cannot see my only daughter struggle to live. Nobody has any such disease in our family and even Himanshi used to be a healthy child. Our dreams for her are crashing. Her mother and I will die if we can’t save her.”

The little girl who had been shining in academics as well as extra-curricular activities before the disease, is now too weak to even walk. The helpless parents are struggling through the condition so their little girl doesn’t have to go through the pain of removing water from her stomach every 20 days. Himanshi's present condition, brings tears to the eyes of her family. Her parents want a permanent solution to end Himanshi's miseries.

Let’s all come together and help an innocent live again. 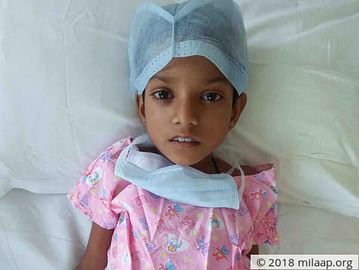 Himanshi's parents are struggling to save their only daughter from a painful condition.