Help this single mother save her little daughter's life | Milaap

Help this single mother save her little daughter's life

Shares
Shares
Share on whatsapp
Asha's husband told her that she had to leave their two daughters at an orphanage because he wanted sons. He asked her to choose between him and their daughters and Asha chose her children. At 9 and 7, Gaganashree and Hemashree are the light of her life. Nothing would induce her to give up her beautiful daughters. She tried to reason with her husband – telling him they could try for a son – to no avail. He left them.
Asha's children Hemashree (left) and Gaganashree
Despite doing everything to save her marriage, she had to file for divorce. She moved to her mother's house with the kids. Despite having studied only till class 10, she got a job in a cloth shop. She made Rs 10,000 per month which was enough to take care of herself, her ailing mother and her children. Asha put her life back together and just when it felt like things would finally get better, her youngest – Hemashree – was diagnosed with blood cancer.
Hemashree was taken to St John's Hospital and then to KIDWAI for chemotherapy. After spending Rs 6 lakhs, Hemashree's cancer relapsed in just a few months. “From 2015, my baby has been sick. She has had constant fever. I don't have any money after the court cases. I went around along with my brother asking every one I know to help me save my daughter,” she says.
The daughter of a police constable, her father passed away soon after she was married in 2007. Her younger brother got a small job working for a multinational company and looked after their mother. He also took loans to help with Hemashree's treatment.
Hemashree at Narayana Hrudayalaya
“After chemotherapy, I sent Hema to school again. She's very smart and she was thrilled to be going to school. But when she started having weakness and fever again, my heart broke. I was too scared to even take her to the doctors. I didn't have money,” she says.
Finally, when Hemashree collapsed at school and developed dark marks on her body, Asha knew she had to save her daughter. She went back to KIDWAI and the doctors referred her to Narayana Hrudayalaya for an urgent bone-marrow transplant. The procedure costs Rs 15 lakhs and Asha is running pillar to post arranging these funds.
She had to rent a small room near the hospital to stay close to her daughter and the sad part is that her rent itself is Rs 450 per day. Staying alone has made her feel isolated from her family. Her voice breaks when she talks about her elder daughter, “I've left Gagana with my mother. She used to cry every night that I wasn't there. But now she saves her pocket money – a handful of coins – and gives it to me because she knows we need money.”
Asha and Hemashree

Hemashree misses home but always knows what to say to make everyone happy. “She asks me why we have no visitors at the hospital. This illness has made her grow up too soon. She graciously thanks who ever comes to visit. She has become very perceptive of others' feelings,” Asha says.
Asha has exhausted all her resources and funds. Her brother is also unable to contribute significantly because he has his own family to take care of. Her mother is a heart patient who cannot do hard labour. Asha feels that she will have no choice but to stop Hemashree's treament if she doesn't get funds.
Help this brave woman save her little daughter and claim her life back from this ordeal. Donate now.
The specifics of this case have been verified by the medical team at the concerned hospital. For any clarification on the treatment or associated costs, contact the champion or the medical team. 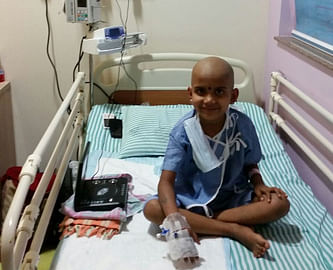