5-year-old Sri Sharan May Not Survive Without A Kidney and Liver Transplant | Milaap
loans added to your basket
Total : 0
Pay Now

You are sending a message to
muthu kumar
Go back

Shares
Shares
Share on whatsapp
5-year-old Sri Sharan is the centre of his parents' world. His smile and laughter made the room brighter. But now, two months of constant suffering has robbed him of his joy. It started with a fever - but in just two months Sri Sharan's two major organs - his kidneys and his liver have failed. He needs an immediate kidney and liver transplant to live.


Sri Sharan with his mother Surya

This 5-year-old needs painful dialysis one in two days

Sri Sharan was born completely healthy and his parents were thrilled with his arrival. They had a lot of dreams for his future and worked very hard to give him a happy, stable and secure life. However, Surya began to worry when he did not begin speaking even after turning three. He was given speech therapy and Surya was waiting to hear him calling 'Amma'. Her joy knew no bounds when he started to pick up words and slowly began to talk.

Surya and Raja began to feel hopeful about his future once again, but more hardships were in store for their baby. Two months back, he got a fever, which did not go away in a few days. The parents were terrified when Sri Sharan's body started swelling. Their fear only got worse when they rushed him to the hospital and the doctors asked them to go to a bigger hospital. It was at Global Hospital, Chennai that they were told that their child's kidneys were both damaged.


"I was not prepared for this. I still can't come to terms with it. Ever since the diagnosis, we have only been running around in different hospitals. The moment he sees the dialysis room he shouts, cries and starts shivering. Unable to bear the pain, sometimes he even faints. He's dizzy after every dialysis and I feel like I'm losing him slowly." - Surya

Sri Sharan needs dialysis every alternate day. His blood count drops drastically and in the last two months, he needed multiple blood transfusions. He has a rare blood type B-negative. Raja needs to inform all blood banks and send messages to all his contacts well in advance to arrange for blood. There are times that Sri Sharan has not got the blood transfusion because of the lack of matching donors.


Sri Sharan started having seizures right when he started dialysis. Doctors insist that dialysis cannot be a long-term solution. A kidney transplant was necessary for him to survive. But soon this little child's condition deteriorated. He started bleeding internally and further tests showed that his liver was completely damaged. He needed a liver transplant as well. His
parents Surya and Raja are completely shattered.

"After the dialysis, we take him to home. Within few hours he starts bleeding or his body becomes swollen. We again rush to the hospital. We have hardly slept or even eaten properly since he fell sick. I can't bear to see him suffer so much. He is scared of everything, and refuses to come to the hospital. We make-up stories each time and my poor child always believes me." - Raja

Surya is donating her liver and Raja is donating his kidney to Sri Sharan. They are willing to do anything to save him.  He needs a kidney and transplant at the earliest to survive. The parents have started it hard to even manage the expense of dialysis. They don't know how they will pay for the transplant. There are times when the parents have not been able to discharge him for the lack of money. Raja would then run to everyone he knew and bring money to the hospital to take him back.

Raja has no source of income now

Raja used to work as a computer serviceman and it has been two months since he could go to work. He has no source of income now. Raja and Surya are from a village near Villupuram and have all the way to Chennai for treatment. They stay in a relative's place in Chennai.

Surya and Raja are desperately trying to save their son. They have very less time in hand to arrange for two major organs' transplant. They have already borrowed huge amounts and they have to pay back their debts. Sri Sharan needs both kidney and liver transplant at the earliest and it costs Rs 27.5 lakhs which is impossible for the parents.

Only your contributions can save his life. 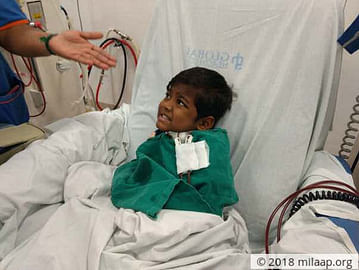 Little Sri Sharan has suffered a lot in the last two months. His parents need your help saving him.

UPI: rzpy.givetomlpsrishara001@hdfcbank (Copy to clipboard)
Or
Click here to read the instructions before you make a bank transfer.