SA
You are sending a message to
SHAIKH ANIS
Go back

“Every time we take little Muskan for her blood transfusions, she has just one thing on her mind; she is used to the transfusions and isn’t scared of them any more, but she keeps telling me and my wife, how she wants to be a doctor and treat others like her. She has always been a very kind-hearted child - all I hope for her is that she gets well soon and fulfills her dreams. She has been fighting with a blood disease since she was just four months old and now only a bone marrow transplant can save her. I am doing everything in my capacity to ensure my daughter has a good future but I don’t know how I will arrange for the transplant without help.” - Shaikh Anis, father of 11-year-old Muskan.

Muskan was diagnosed with Thalassemia Major when she was just four months old. It is a blood disease that involves lower-than-normal amounts of an oxygen-carrying protein. She has been regularly undergoing blood transfusions since then but now the doctors feel that the only way Muskan can recover completely is through a bone marrow transplant.

“When she was four months old, we noticed that she was not feeding at all and was also running a high temperature. We got scared and took her to a doctor who advised us to get some tests done. When we got the test results after three days, it said that my daughter had Thalassemia. We were very upset but hoped that at least regular blood transfusions would cure her. But now her only hope at getting better is through a bone marrow transplant.”

The disease is making her weaker by the day, she now mostly spends her days indoors, lying in bed

When Muskan was born to her parents, their little world was filled with the beautiful smile of their daughter. But her disease is slowly making her weaker by the day. Sometimes she manages to go to school and sit with her books but often gets tired. Now, most of her time is spent lying down in the bed.

“Her favourite pastime used to be playing hide and seek with her friends in the fields. She loves staying outdoors and learning new things about the crops that we grow but these days her disease doesn’t allow her to get out in the open so much.”

A farmer by profession, Muskan’s father is struggling day and night to afford the transplant to save his daughter’s life

Shaikh Anis is a farmer in the district of Aurangabad, Maharashtra who owns about 2 acres of land. With little help from his wife, he farms his own land and earns about Rs 2500 - 3000 per month. But the last few months have been difficult due to scanty rainfall. Crops haven’t grown properly and he has hardly brought any income home. He is now working extra hours as a daily wage labourer and doing odd jobs to give his family two square meals a day. He has already spent a lot on Muskan’s treatment and with his earning he wouldn’t be able to arrange for the bone marrow transplant that would cost him Rs 9 lakhs.

11-year-old Muskan is fighting a blood disease since she was four months old and has been under regular transfusions. But now she needs a bone marrow transplant that will help her recover fully. Her father is a poor farmer who is unable to afford the transplant but your kind support can bring back the smile on little Muskan’s face and help her fulfil her dreams of becoming a doctor one day.

Your generous contribution can help Muskan live a healthy life 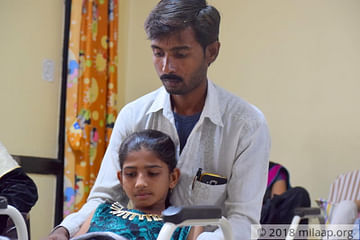 The disease is making Muskan weaker by the day. You can help save her.