After 7 Traumatic Miscarriages, This Mother Is Now Struggling To Bring Her Child Into This World | Milaap
loans added to your basket
Total : 0
Pay Now

A
You are sending a message to
Ayeesha
Go back

After 7 Traumatic Miscarriages, This Mother Is Now Struggling To Bring Her Child Into This World

“I am not going to give up now. 7 miscarriages later, I can see my life changing for the good. I feel I will finally be able to carry my new-born in my arms. I have hope.” – Ayeesha.

Life has never been easy for Ayeesha. She was 14 when her father, the sole breadwinner of their family, was struck with paralysis. Her mother and sister were both deaf, dumb and blind. Her grandmother who had raised her till then, had had multiple attacks already, and was fighting to survive. Stuck in such a situation, her parents wanted nothing more than to place her in safe hands. Very soon, Ayeesha was married.

Ayeesha became a mother at a young age

“She’s a beautiful girl, my Sukina. I never had a companion I could share all my thoughts with, till she came along. My joy knew no bounds. Having lost my father and grandmother soon after Sukina was born, my in-laws and I, along with my sister and mother moved to their village. We are a family of seven, my husband being the only earning member. Left with no choice, he left to Saudi for work. He had to support the family after all.” – Ayeesha

“In our village, getting to the hospital involved four hours of bus-ride. I once lost a child to that”

Ayeesha, who adores babies, has had an unfortunate series of seven miscarriages – each one more painful and heart-wrenching than the previous. During her first pregnancy, she was in the city where she had access to medicines and delivered a healthy child. But, in the village, it was a different story. With no access to the medication she required, Ayeesha had traumatic pregnancies one after the other. After the painful incident of still birth, during her 5th pregnancy, Ayeesha moved to Chennai with her family.

“I don’t know how I survived all of it. I lost my 2nd child because they said it had no heart-beat. My 3rd child did not grow even after four whole months. My 4th was stuck to the placenta. When I was pregnant with my 5th child, the doctors said it was only a clot. For 5 months I was in the dark. I had no clue. When I did get to know, it was too late for my medication. But I delivered the baby. I even carried her in my arms. Imagine the pain of having to lose a child you held in your arms! She left the world the very next day. I was devastated and decided to move to the city. But due to the complications from the previous pregnancies, I had to go through three more miscarriages! – Ayeesha broke down.

Ayeesha doesn't want Sukina to ever feel alone like she did in her childhood. She wants her to have a sibling, a companion.

Years later, Ayeesha has conceived again. When she went to the doctor, it was finally revealed that the earlier complications were due to her body’s condition. She needs four shots of Heparin every day, to prevent clots. She’s also developed Diabetes and blood pressure. But, now knowing the cause for the miscarriages, Ayeesha has been under medication. Every hospital she visited, shunned her away because of her medical history and the extreme risk involved in this delivery. They advised her to go for an abortion.

“I know the baby is doing well and I’ll do all I have to, to bring it into the world!”

“When every doctor turned me down, my current doctor promised to deliver my child. Words can’t describe how grateful I am to him. Even if there’s a 10% chance that my baby will survive, I am ready to take it. After all, there’s no pain I’ve not seen!” – Ayeesha.

All hindrances addressed, Ayeesha is left with one last hindrance – funds

Having been laid off his job in Saudi, her husband now works as an AC mechanic here, with an income of Rs. 300 a day. The cost involved in safely delivering her baby amounts to 4 lakhs and the parents are helpless.

“10 months ago, my husband was sent back and we’ve been struggling since then. 4 lakhs! Where will we go? There’s not a soul we have not asked for funds from. I want to save my child. For all the lives that have been lost before, I want to make-up by bringing this one into the world. Please help us!”

After the many abortions, Ayeesha finally has hope. You can help her safely deliver her child, with your contribution.
Donate 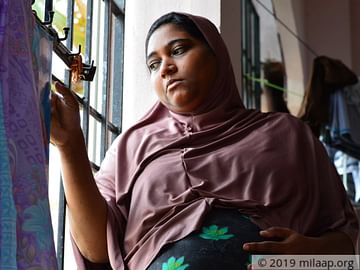 This mother is struggling to bring her child into this world.

Ayeesha is in need of funds, to ensure the safe delivery of her child. You can help her.