26-year-old Who Is Battling For Life After A Nearly Fatal Accident Needs Urgent Help To Survive | Milaap
loans added to your basket
Total : 0
Pay Now

T
You are sending a message to
Thiyagarajan
Go back

"When he gained consciousness after the terrible accident, he was frightened, confused an desperate to know what had happened. He couldn't speak and tears were rolling down his eyes. I knew he was looking for our mother. On that fateful day, he took our mother to the hospital in his bike. On their way back, they met with an accident that had changed our lives forever. His right side is completely paralyzed. He is struggling to speak, the pain he is undergoing is visible in his eyes. He had just started his career. He always wanted to take care of our parents and give them a comfortable life. He is not able to bear that he is dependant on us for every small thing. With no words give him comfort, he is fighting back but we are losing our strength and hope slowly." - Stephen, Brother of 26-year-old Arun Samuel.

This terrible accident had left him with multiple fractures and injuries

26-year-old Arun, an active and young man with full of dreams and aspirations is now  battling for his life. On his way back from hospital with his mother, his bike collided with a car that came in a wrong direction, throwing him onto the opposite side of the road and into the path of an oncoming vehicle. His mother Tamil Selvi had a fracture in her neck. Arun's situation was very critical and he lost his consciousness. The skin on his hands and legs were torn apart causing severe injuries. His left forearm and shoulder was fractured. His head was severely injured with internal bleeding.


"We were told that his condition was potentially fatal and if he did survive he would have a very long recovery. We had just one thought- to save him at any cost. An immediate surgery was done for the head injury. He did not give up, he survived it. But we were not able to feel relieved about it. The pain and trauma he is going through now is worse than death itself. I can't bear to see him in this condition." - Stephen.

Arun is the youngest son of Tamil Selvi and Durgaiappan. Their eldest son Stephen was recently married to Sindhu. After their father's retirement, Stephen and Arun was taking care of the family. When Stephen got a call informing the accident, he couldn't comprehend anything. He rushed to the hospital with his wife. Since then, they are in shock and never had any time to eat or sleep. His elderly parents are worried and they have fallen sick too.


"My mother has a fracture in her neck but doctors said she cannot undergo a surgery because she is already undergoing dialysis and a surgery would lead to more loss of blood. She is in so much of pain but she is more worried about Arun. I'm running back and forth to hospital and home. I feel afraid to leave him alone, I want him to stay strong and let him know that we'll never let him down. I step out from the hospital only after he sleeps. He deserves a life." - Stephen.

Stephen, the sole breadwinner of the family, is struggling to save his brothers' life

Stephen works in a private company, with the meager amount he earns he was able to feed his family. Since the accident, he could hardly go to his office. He has spent Rs 5 lakhs so far and he is struggling to make the ends meet. He is physically and emotionally exhausted.


"My mother refuses to have dialysis now, she wants every rupee to be spent for Arun's treatment. But how can I agree to it? It is my responsibility to take care of both of them. I'm dying inside everyday to save their lives. Arun's friends are my biggest strength now, they have been helping us in many ways. But the treatment costs keeps mounting everyday. I have promised my brother that I will save him at any cost. He has a long way to go. I know he is strong enough to fight but I don't know what else I can do to help him." - Stephen.

26-year-old Arun is battling for his life after a terrible accident. His brother Stephen, sole breadwinner of his family is struggling to save his life. Arun was strong enough to survive all the terrible fractures and injuries. He needs a prolonged ICU treatment to recover completely. His elderly parents who are sick now is desperately waiting for him to come back home. Stephen has done everything within his power, now he needs your help to save his brothers's life. 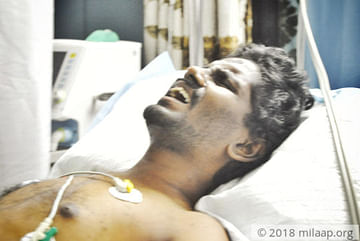 His family and friends are struggling to save him. He can survive with your help.

UPI: rzpy.givetomlparunsamu001@hdfcbank (Copy to clipboard)
Or
Click here to read the instructions before you make a bank transfer.