Their Son's Life Comes With A Price Tag That These Helpless Parents Can't Afford | Milaap
loans added to your basket
Total : 0
Pay Now 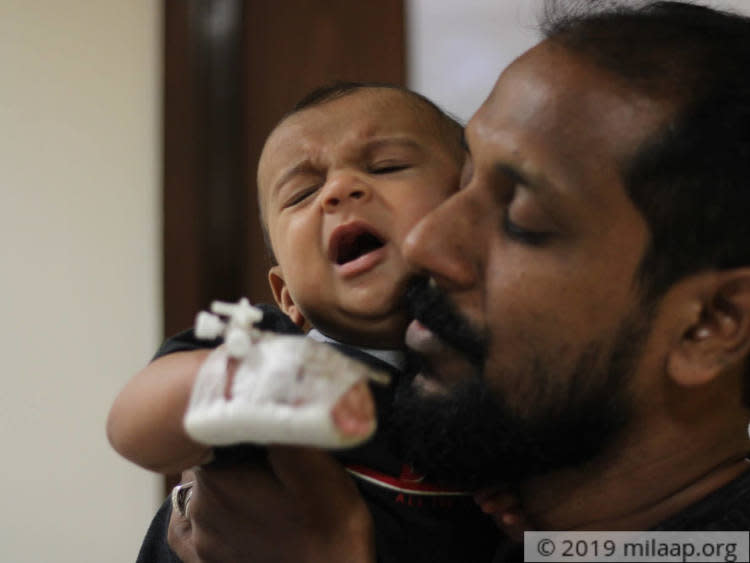 "It wasn’t the kind of welcome we had planned for him. He was supposed to be lying on our laps, being pampered. Not on the hospital bed, with dosages of antibiotics, scans, tests, needles and surgeries when he was barely a month old!" - Jaseena, mother

A day after he was born, baby Yuhans got a fever that never subsided

When baby Yuhans was born, his parents were delighted. But the excitement lasted only until the very next day, when he got a really high fever. His blood cells had increased dramatically and nobody knew why. He was prescribed antibiotics and sent home. But there seemed to be no change.

”We were very afraid. Despite the medicines, his fever never came down. I was scared to do anything at all. What if something I did aggravated his fever? We waited till the prescribed dosage was complete. When there was no sign of improvement, we rushed him to a different hospital!” – Jaseena, mother.

His umbilical cord had been severely infected

In a normal scenario, a newborn's umbilical cord heals soon after birth and eventually falls off in the first few weeks of birth. But in Yuhan's case, it had been infected and the doctors advised that he receive immediate surgery.

“Despite all the precautions,15 days after the surgery the wound hadn’t dried. That’s when the doctors said his sickness was a serious one. It seemed like his struggles would never end...” – Yunus Ali.

He was two months old when he was rushed to a hospital in Chennai with his surgical wound still fresh. Multiple tests later, he was diagnosed with Leukocyte Adhesion Defect – A rare immunodeficiency syndrome that is responsible for the patient catching recurrent infections due to the immune system’s incapability to fight the pathogens effectively.

“It was very rare they said. We had never even heard of such a disease. And we did not want to learn about it. Not this way!” – Jaseena

With an urgent bone-marrow transplant, baby Yuhans can be saved

Yuhans can be victim to many other infections because of his condition. A bone marrow transplant is the only effective solution to this rare immunodeficiency syndrome. But little Yuhans doesn't have any matching donor in his family.

“We were terrified when they said we couldn’t be donors. We thought that was it, until they said even others could be donors. We were relieved but the cost involved in this alternate process knocked the breath out of us!” – Yunus Ali

Yunus Ali, the sole bread-winner of their family works at a booking office for lorry transportation and earns Rs. 15,000 at most in a month. But it has been close to a month since he last went to work. While what he earned was enough for the simple life they led before, the surgery amounts to 25 lakhs and the family is helpless.

“Initially it was to be 10 lakhs only. It's not that I could have afforded that either, but at least there was some hope of gathering the funds. But the cost has escalated to 25 lakhs! I can’t afford it, even if I borrow money from every single person I know. Please help us save our son!” – Yunus Ali.

Having just stepped into this world, it's too soon for baby Yuhans to be battling life-threatening diseases, Your generous contribution can help save him.

Donated to this campaign via Bank transfer/QR Code? Click here if you can’t find your donation listed below.
VC
Vivek donated S$200