Multiple Heart Defects Threaten To Take 3-Year-Old's Life, He Needs Your Help To Survive | Milaap
Receive tax benefits by donating to this cause. 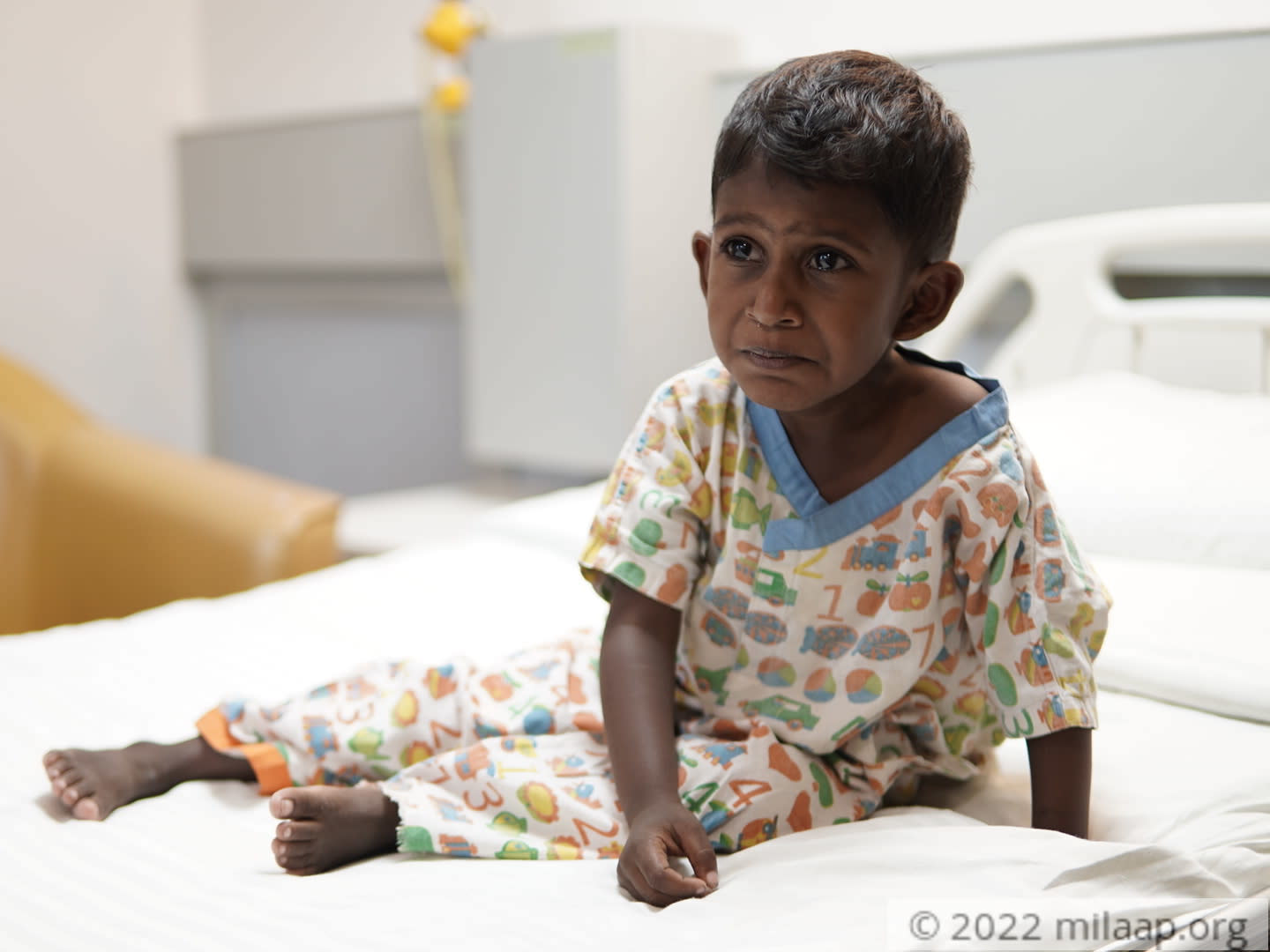 Share
Most 3-year-olds are known to learn new words to add to their growing vocabulary every day. When little Yogesh tries saying words and strings them to form sentences, his shortness of breath overtakes this attempt. It gets so bad that he has to stop talking. He is left exhausted and he does not communicate at all most of the time. He cannot even cry even when he feels helpless, as that makes worsens this problem.

“He is able to eat very little solid food. Because of this, he breastfeeds even now. But even that he cannot do properly because of his breathing troubles. He is also not growing well at all because of his bad heart.” - Vetrivel, father

Yogesh is suffering from congenitally corrected transposition of the great arteries (CCTGA), which is a rare structural heart disease, in which the heart’s lower half functions are reversed. The stronger left ventricle (chamber of the heart) pumps blood to the lungs, and the weaker right ventricle has the harder chore of pumping blood to the entire body. The right ventricle is not built to last as long as the left ventricle.

As a result, there is has a huge hole between these two pumping chambers in Yogesh's heart, and a blockage of blood going to the lungs. All these conditions have weakened his heart to the point that it cannot pump blood efficiently, resulting in low levels of oxygen circulation throughout the body.

Ever since Yogesh was diagnosed with his heart condition when he was just 3 months old, his parents have been taking him to the hospital frequently. At the hospital, Yogesh would be administered care that would only serve as temporary relief for his shortness of breath.  He has lived a life restricted to indoors because of his parents' worry that something bad might happen to him. He fears everyone and anything as he does not meet new people or go to new places. His parents were told that he was too young to get an open heart surgery as an infant and that he would have to grow up a little. Now he is old enough to get it, but his parents do not have the funds needed for it.

"Every trip to the hospital from our hometown itself costs a lot of money. I am having to borrow heavily to fund these trips, but I am doing it because my son is more important to me than my troubles. But the surgery to save him requires an amount that I can never make in this lifetime.” - Vetrivel.

‘I do not earn money regularly, nor do I have savings… How will I save my son?’

Yogesh’s father Vetrivel is a small-time farmer, while his mother, Thulasi, is a homemaker. Vetrivel does not own a single cent of land; he works on other people’s land, when the opportunity arises, for Rs 500 per day. As work is not regular, he does not bring in money home a fixed income either.

The family depends on ration rice and pulses to fill their stomachs. In this situation, Yogesh’s deteriorating illness has put a lot of mental and financial pressure on Vetrivel.

“I am not very educated, so I am not aware of how I can arrange funds on such short notice. We are poor, and the people we know are poor – so how will we borrow money from them? I have no savings and no way to save my son. Please help me.” - Vetrivel, tearfully.

This poor father needs your urgent help to save his only child. Click here to save Yogesh.
YV
Patient yogesh v is 3 years old, living in Nagapattinam, Tamil Nadu
AC
Being treated in Apollo Childrens Hospital, Chennai, Tamil Nadu