For 4 Years They've Struggled To Save Their Son, Now They Can't Afford Even A Day's Delay | Milaap
loans added to your basket
Total : 0
Pay Now

DR
You are sending a message to
Dr Ranganath
Go back

For 4 Years They've Struggled To Save Their Son, Now They Can't Afford Even A Day's Delay 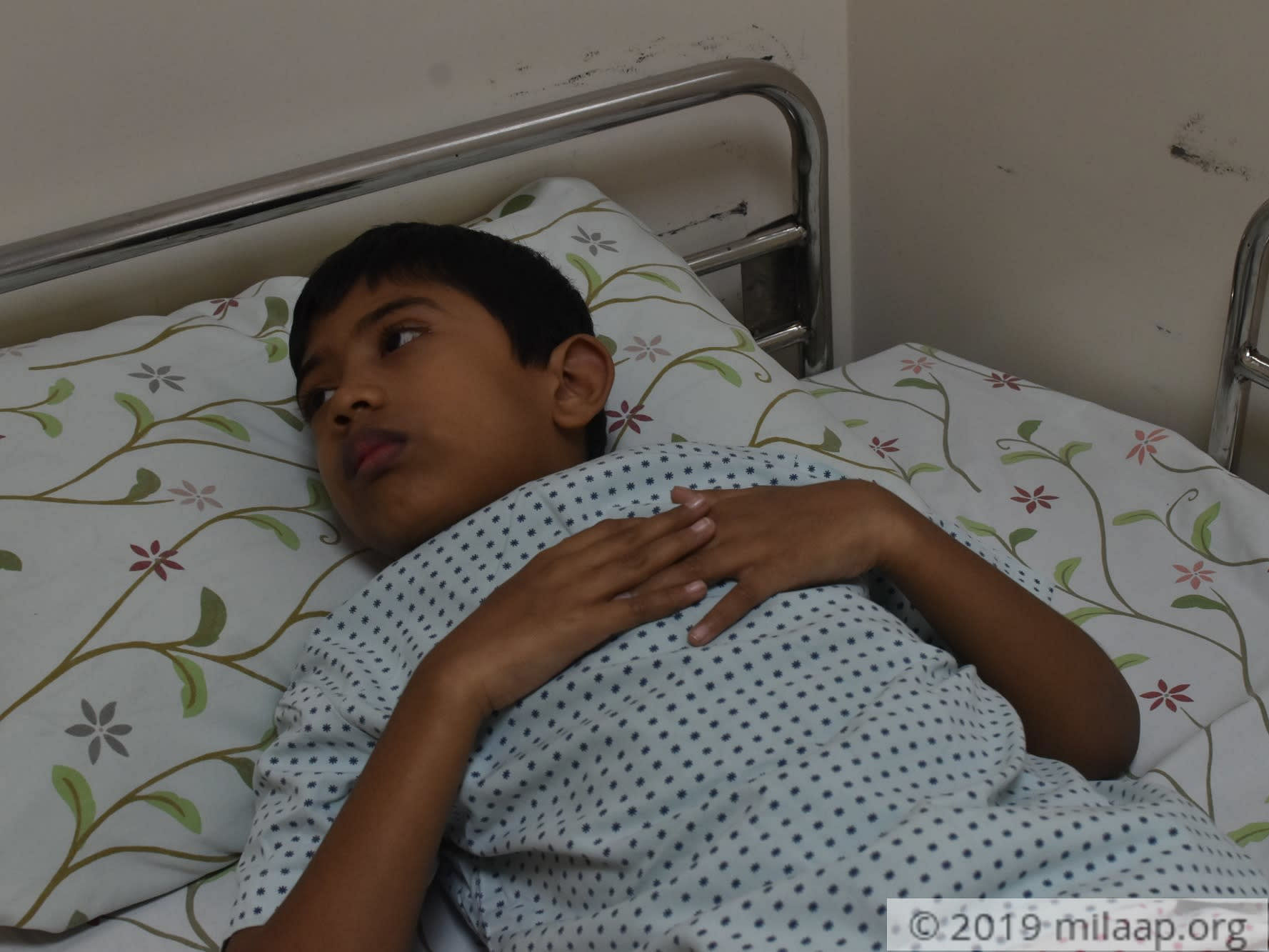 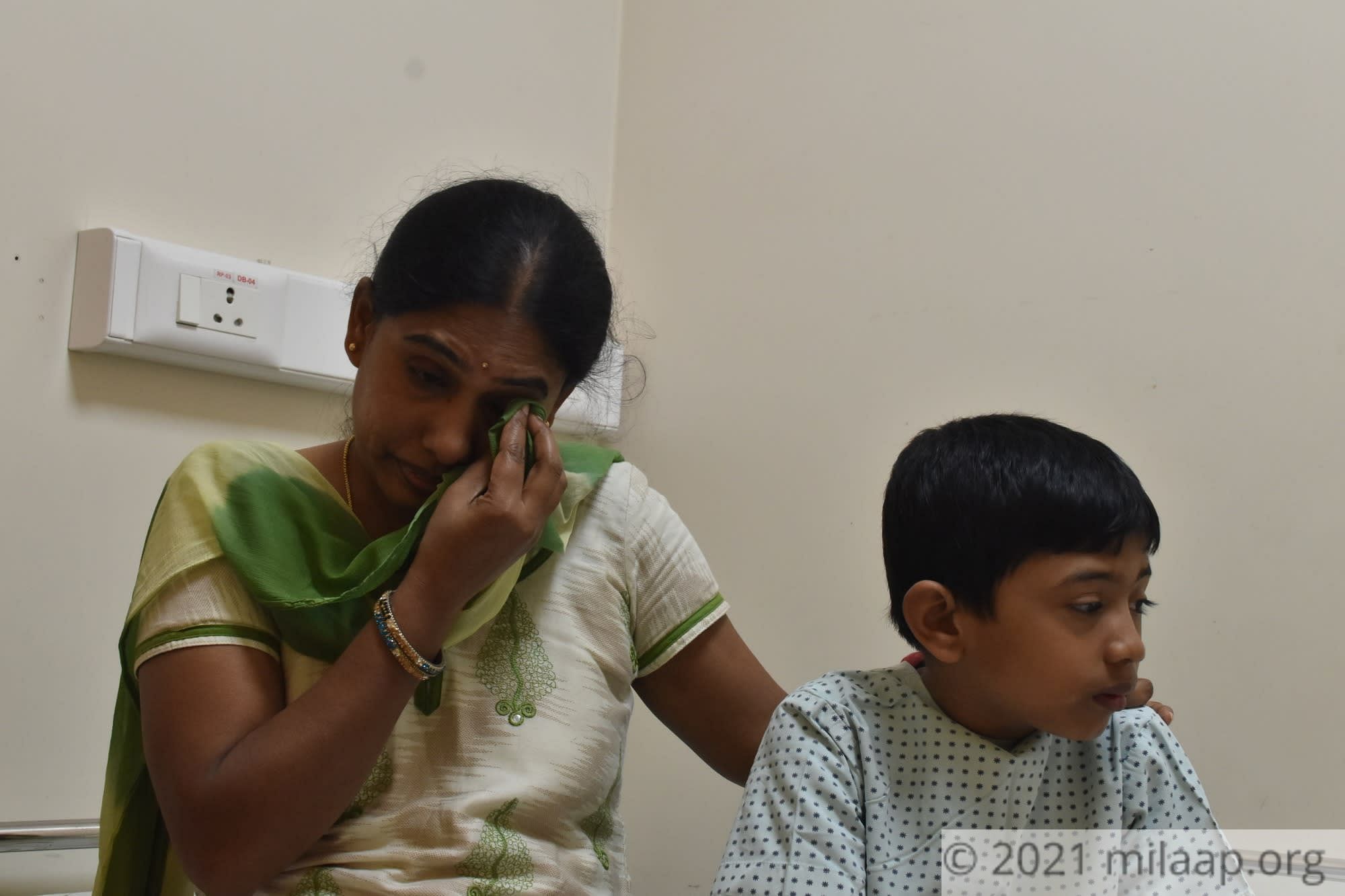 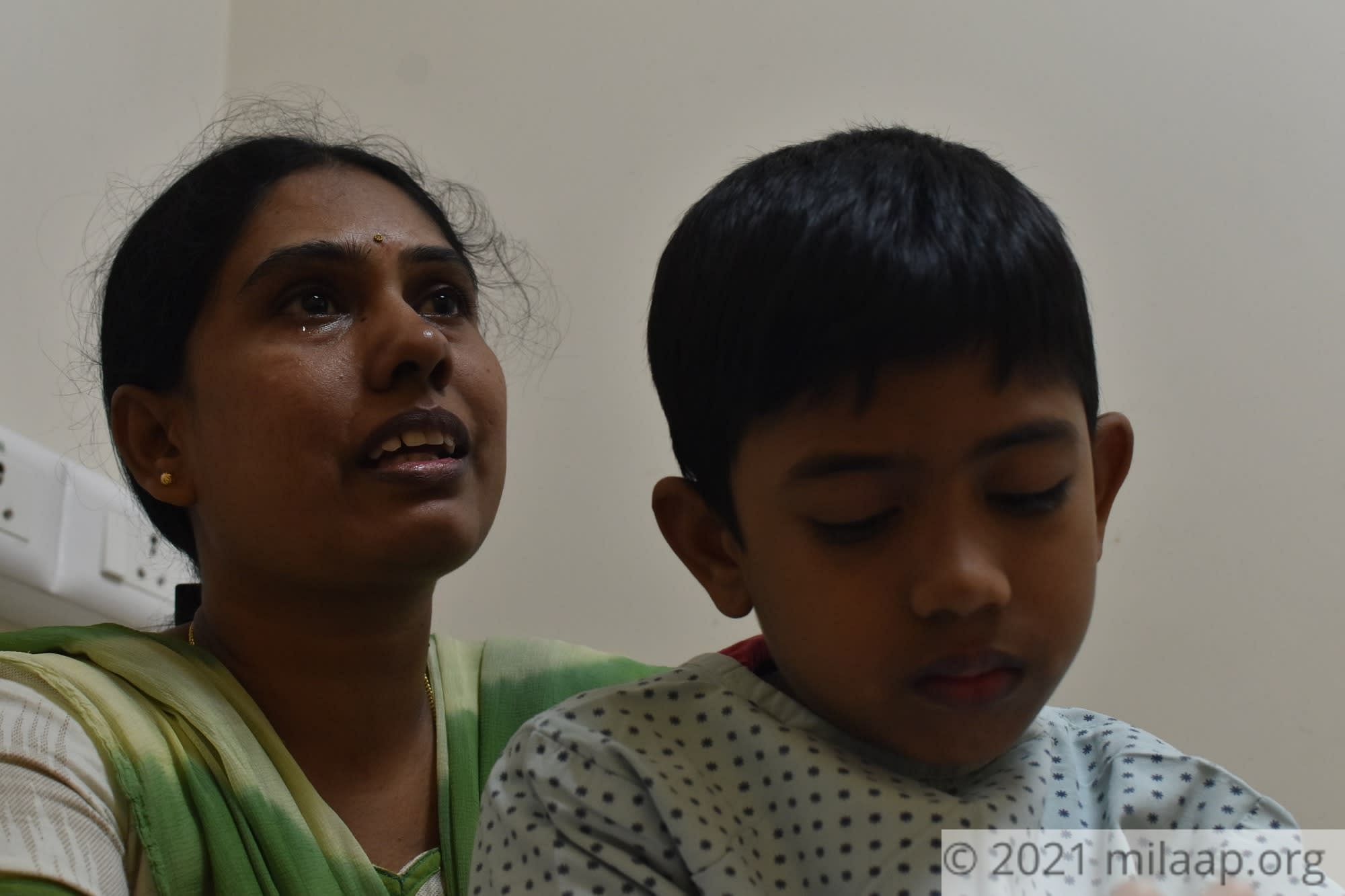 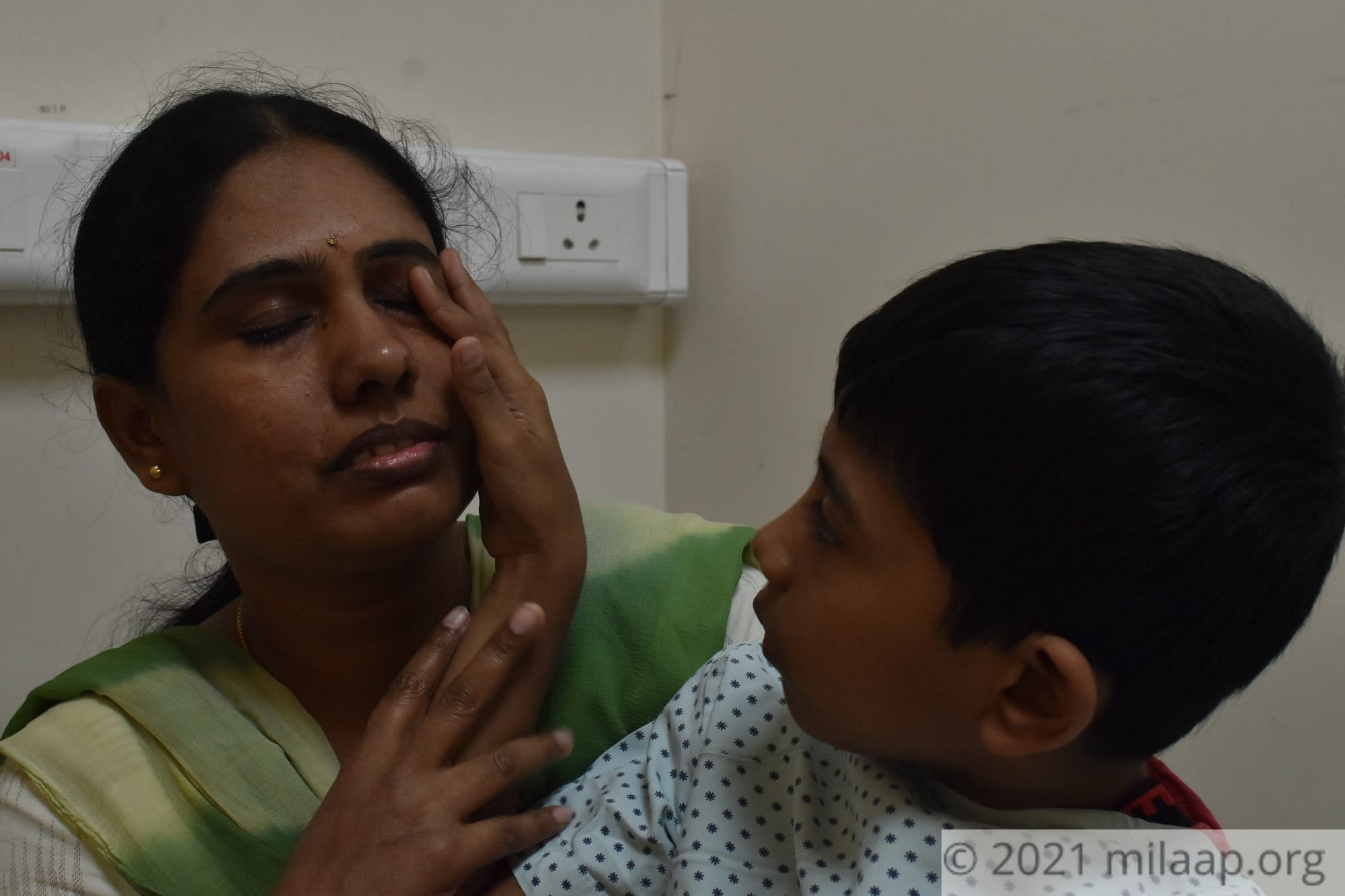 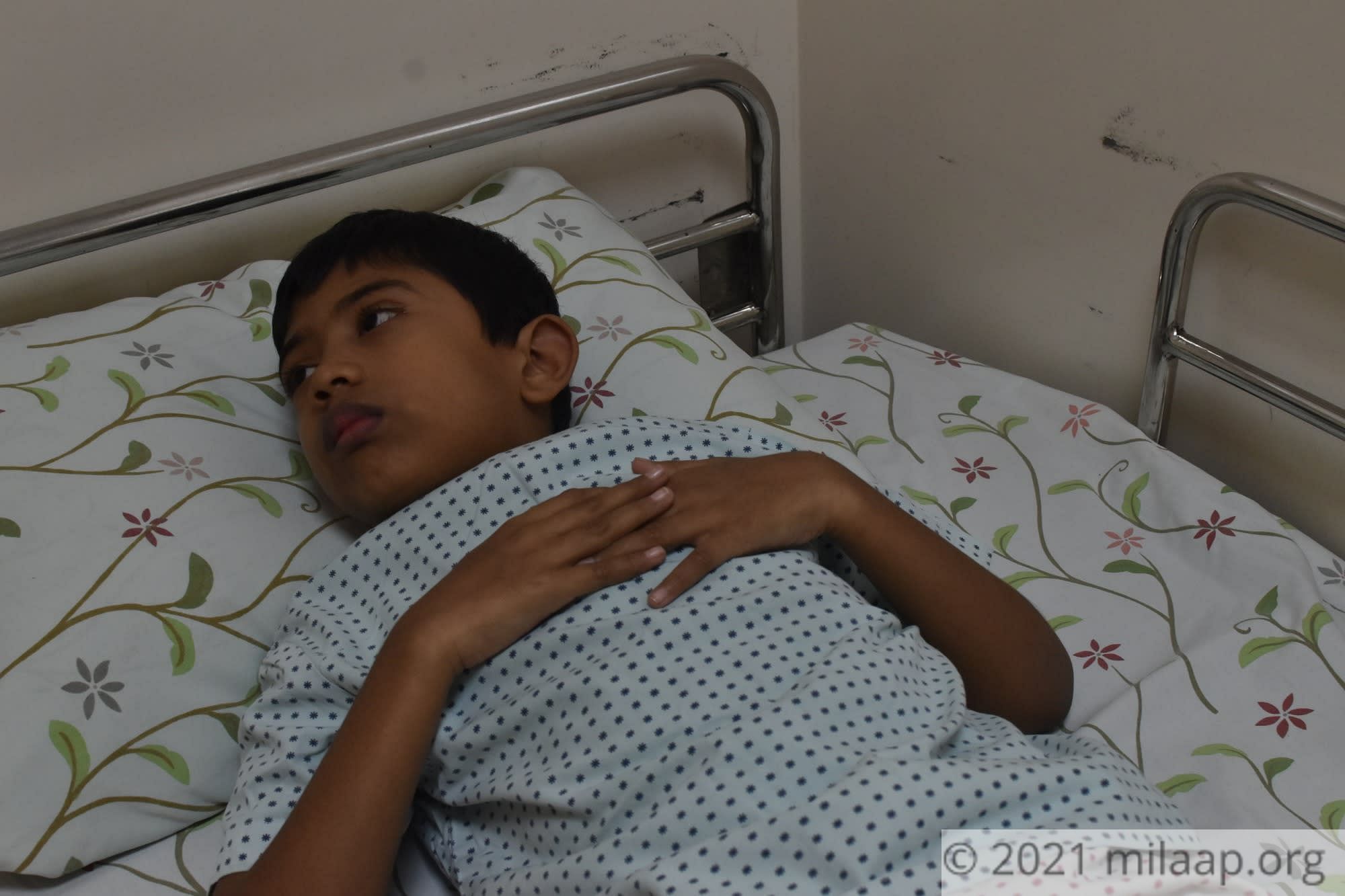 “It was his first dance programme; he was smiling, adjusting his costume again and again. One by one all the kids got onto the stage, but my son... he didn’t. He couldn’t! His legs were going numb again, and he eventually collapsed into my arms… This disease has denied him even the little joys!” – Sumitra, mother

8-year-old Yogavardhana doesn’t know what it feels like to lead a normal life. He can’t walk for long, and struggles to carry his school bag. He loves drawing, but his hand aches as soon as he begins. While playing, the other kids refuse to take him to his team, for he slows them down. But little Yogi knows why. Not complaining, he sits in a corner, playing audience. Thalassemia has stolen most of his childhood, and now, he still suffers.

What started out as a mere fever, turned out to be a deadly disease

“He suffered from fever, and when we took him to the doctor, they said he had a severe shortage of healthy blood. We took him to Bengaluru, where he got a blood transfusion. I cried that day, when I saw them piercing him with that needle. I thought it was a one-time thing, and brought him home to our village. But it wasn't! He kept having to go back. Months later, he was diagnosed with Thalassemia. This disease has caused him so much pain, taken everything from him, and now it's threatening to take his life as well!" – Sumitra broke down.

“My younger daughter Hamsa, and Yogi always shared all that they had. But as fate would have it, she too has been diagnosed with the same disease. She too struggles, like him. It’s difficult for us to see both our kids fighting this disease every minute of their life… We want to cure them; Yogi first, and then our little Hamsa…” – Sumitra, mother

While it helps the person survive each day to an extent, transfusions come with their own side effects. Doctors had suggested Yogi undergo an immediate Bone Marrow Transplant, for that’s the only cure to his condition. The parents have been struggling for four years now, to afford his transplant, and they’ve had no luck. The estimated cost is 34 lakh rupees, and it’s beyond them.

Leaving their village behind them, they moved to an unknown city, for their children

Prasan Kumar was a daily-wage labourer in their village. Every month, Sumitra had to take their children, one-by-one and by herself, to Bengaluru. When a drought struck, and Prasan couldn't find any work, they decided to move to Bengaluru permanently. They struggled to make ends meet for a while, before Prasan got a job as a driver. Now he earns Rs. 10,000 a month, but it’s nowhere near enough.

“Yogi’s condition has become critical, and he is growing older. Mere transfusions won’t help him anymore. The doctors have told us it’ll be too late to save him if we push the transplant any further. I don’t know what to do…" – Prasan Kumar, father.

Little Yogi has suffered for the past 8 years; and his parents, with him. You can help them cure him of his sickness, and let him live life like he should, like the other kids.

Stay strong, Yogavardhana! May you receive lots of blessings to get better.

5 others have contributed
Click here to know more about Yogavaradhana

Stay strong, Yogavardhana! May you receive lots of blessings to get better.