This stone-quarry worker has to save for months to take his sick son to the hospital | Milaap
loans added to your basket
Total : 0
Pay Now

TR
You are sending a message to
Tulasi Rajalingam
Go back

Shares
Shares
Share on whatsapp
Vishnu's father Srinivas works as a supervisor in a stone quarry. Even though Vishnu was diagnosed with chronic liver disease as a small baby, he has received treatment as an when his father is able to afford it. Once in three months, Vishnu and his father visit their doctor in Hyderabad – but this is no longer enough.
Srinivas with Vishnu

Vishnu has suffered from liver disease all his life

Looking back, Srinivas sees how Vishnu's attitude to his condition has changed over the years. At first, he was scared of the injections, crying everytime he thought about it. Slowly it became a part of his life. Now, Vishnu's high point is the bus journey that takes him out of his village – Nakkabokkalapadu to Hyderabad to see the doctor.

This journey happens once in three months, when Srinivas has put together the funds for Vishnu's medicines. “I keep saving for two months. My brother and father help me. Then we put together about 10,000 and bring Vishnu to hospital for checkups and medicines for the next few months,” he says.

Vishnu now needs a liver transplant to live because his liver has become too damaged
But by now, Vishnu's liver has become too degraded to be managed by medicines alone. The doctors have asked Srinivas to arrange for Rs 20 lakhs for a liver transplant without which Vishnu will soon succumb to his condition. It is an amount that Srinivas with his monthly salary of Rs 8,000, cannot hope to arrange in the next one month.

“No one in my family has that much money. I have been working in the quarry in my village for the last 16 years. Where do I go and who do I ask for money? We had arranged 50,000 which also got spent very quickly in getting Vishnu's tests alone,” says Srinivas.

Srinivas with his wife Malleswari and children - Vishnu and Yamini

Since Vishnu has had chronic liver disease from when he was a baby, the doctors suggested that Srinivas get his 10-year-old daughter Yamini tested for liver disease too. Her blood reports confirmed that she too had a bad liver. From when they recieved the news, Srinivas and his wife Maheshwari have started feeling a heavy weight in their heart.
“From when he was born Vishnu was thin and weak. We knew he was sick. But my daughter is healthy and is growing well. We never imagined she would be sick too. I know I don't have enough ability for my children's treatment, but I have to manage as much as possible,” laments Srinivas.
Vishnu with his younger sister Yamini - she too has developed a liver condition now
Srinivas knows that he will never earn enough to send his children to college and university. But he is desperate for funds that will at least save their lives. Despite his stoic approach to life, he is sick with worry for his children. Your contribution will ease this poor man's heart and give him hope that he can save his children.

The specifics of this case have been verified by the medical team at the concerned hospital. For any clarification on the treatment or associated costs, contact the campaign organiser or the medical team.
Click here to contribute and save Vishnu.
Donate 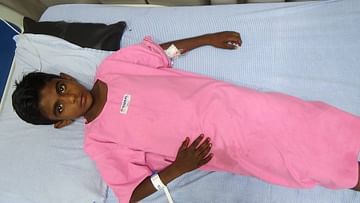 Help this stone-quarry worker save his son

Vishnu had liver disease from when he was a baby. Time has run out and he needs a liver transplant.