This Baby Is Disappearing Right In Front Of His Parents' Eyes Because He Can't Eat Or Drink Anything | Milaap
loans added to your basket
Total : 0
Pay Now

“While other mothers get to breastfeed their children, I have to feed my baby through a tube in his stomach. Sometimes I wish my son was like other babies...I wish I could take him home, away from all this pain. I don’t know what to do...”
– Prasanna, mother

Tirupathi and Prasanna gave birth to beautiful baby Vihansh 8 months ago. He is their first child, and was a source of incredible joy and happiness in their lives until one day in April this year. Both parents had noticed that he wasn’t eating like he normally did, and then poor Vihansh started vomiting so much that he was unable to breathe. The terrified parents had taken him to a hospital, where they gave him some medicines to control the vomiting.

Three months went by, and their baby’s condition kept getting worse

“The medicines had no effect on my baby. We were so desperate we took him to so many hospitals over the next three months, spending all of our money on tests and treatments. When we ran out of money, we borrowed more from our friends and family. All the while, our Vihansh kept vomiting so hard he couldn't breathe whenever he ate, and his weight kept steadily reducing.”
– Tirupathi, father

In July, they thought they finally had a diagnosis, and then the cure

Doctors discovered that baby Vihansh’s esophagus (the food pipe going down from his throat) was too narrow, and unable to properly take food into his stomach. At their recommendation, Tirupathi and Prasanna got Vihansh a surgery to correct the genetic defect by enlarging the food pipe. They also had a temporary feeding tube installed on and into his stomach, to use if required. It was a small cap that they could open, allowing the parents to directly fill their baby’s stomach.


But now the problem has relapsed

A review at the doctor’s clinic has now shown that baby Vihansh’s osephagus is still too narrow. The 8-month-old has started regularly vomiting again, even though his parents are only using the feeding tube to his stomach to feed him. His weight is still dropping, and has reached dangerous levels; poor Vihansh now weighs a little over 4kgs, less than half of the average weight for a baby his age.

“Doctors are saying we need to put him on total nutrition therapy for 6 months because of his extreme weakness, until he can get another surgery. If I can get my job back as an accountant at this construction site in my village then maybe I can save my son...but we cant delay it any more. If he doesn't get this therapy now, he may not live.”
– Tirupathi

Poor baby Vihansh is wasting away each day, losing so much weight in such a short time, because he can’t eat or feed like other babies. These first-time parents are watching their son disappear before their very eyes, but they are unable to do anything about it. Only you can help them now. 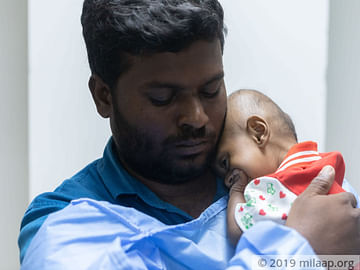 I Wish I Could Take Him Home, Away From All This Pain

His parents have already spent everything they had so far, they can't save him.

UPI: givetomlptirupathi1@yesbankltd (Copy to clipboard)
Or
Click here to read the instructions before you make a bank transfer.