After 2 Stem-Cell Transplants For Rare Condition, He Needs Supportive Care To Recover From Complications | Milaap
Receive tax benefits by donating to this cause.

After 2 Stem-Cell Transplants For Rare Condition, He Needs Supportive Care To Recover From Complications 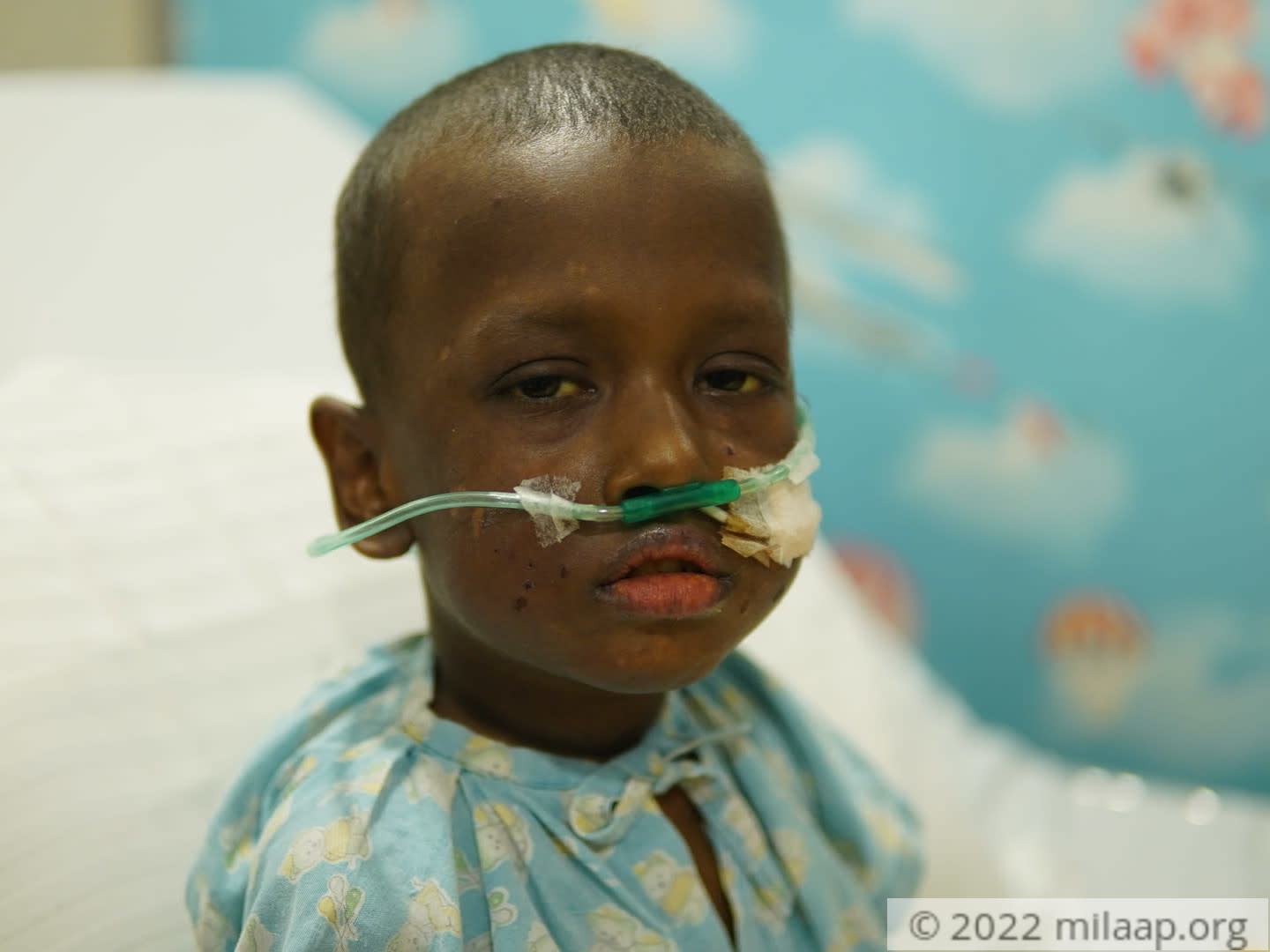 “It was about 2 months after his birth that we realised something was wrong. He had rashes, persistent fever and even some swelling near his armpit. It took us several months and a couple of hospital visits to find out the cause of all these symptoms - and when we did, we were stunned. We couldn’t believe that our baby was suffering from such a rare condition.” -  Yazhini, mother

Venudev was initially diagnosed with tuberculosis, but a DNA test report revealed that it was mendelian susceptibility to mycobacterial disease, or MSMD, a rare immunodeficiency disease, where a healthy person is prone to clinical diseases caused by mycobacteria. In Venudev’s case, it is a result of side-effects from the BCG (tuberculosis) vaccine that was administered to him, as a newborn.

“We were told that the only curative treatment option was a stem-cell transplant, but we had to wait because he wasn’t in good health. He was thin and weak, so he had to be given protein powder and anti-tubercular treatment (ATT) drugs until then. I was also extremely stressed and anxious because I couldn’t afford the procedure. So, I sought kind strangers for help, and in December 2015, my son was able to undergo the transplant with me as the haplo matched donor.” - Alaguvel, father

He underwent a bone marrow transplant, but it was unsuccessful

“I felt immense relief at that moment, because it seemed like he was doing really well. I thought this was it, that this nightmare would end soon and he wouldn’t have to suffer anymore. But only days later, the one thing that we feared came true - his body was rejecting my stem cells. The transplant was unsuccessful.” - Alaguvel, father

While they awaited the green light from the doctors for Venudev’s second transplant, the little boy was given ATT drugs, as a way of controlling the disease. However, it didn’t keep the complications at bay. Venudev suffered frequent infections, fevers and had to undergo a surgery for an enlarged spleen. Meanwhile, Alaguvel and Yazhini had to terminate their second pregnancy, after the fetus tested positive for the same immunodeficiency that Venudev has.

A second transplant resulted in complications

“Finally after over 2 years, he underwent his second transplant in March 2021. This time, with his mother as the haplo matched donor, he was displaying promising results. Seeing the little signs of improvements, we were hopeful that he would get better soon. But we were proved wrong yet again. He suffered from complications - graft versus host disease (a condition where the donor stem cells attack the recipient).” - Alaguvel

He needs prolonged treatment, but his parents have run out of resources

Venudev has high chances of recovery with supportive treatment. But his parents have exhausted everything they had so far and are struggling to keep his treatment going. His father, Alaguvel, works in a private IT firm, and along with being the sole breadwinner of his family, he also provides financial support to his parents, and in-laws.

“In the past 6 years, I’ve spent so much on my son's treatment that it has crossed 1 crore rupees so far - all through my savings, loans, and insurance. I’m financially shattered now, and have nothing left. My son is getting better, and there is much progress in his recovery. But without the supportive treatment, it will all have been in vain. You’ve helped us once. Would you be kind enough to help us once more?” - Alaguvel

Little Venudev has no knowledge of what’s happening to him. Give him a toy in his hand and he will happily play with it for hours. It is his sweet smile that gives his parents the strength to go on. His further treatment will cost them INR 10 lakhs. Your contributions can finally end this 6-year-old’s misery, and give him a normal life. Click here to donate.
VD
Patient venu dev is 6 years old, living in Chennai, Tamil Nadu
AC
Being treated in Apollo Cancer Hospital, Chennai, Tamil Nadu