Farmer’s 3-Year-Old Who Is Unconscious In The ICU Will Not Make It Without Urgent Treatment | Milaap
loans added to your basket
Total : 0
Pay Now

You are sending a message to
Anoop
Go back

Shares
Shares
Share on whatsapp
Little Venkata loves to spend time with his father, Srinivasa. Every night, he would lie down beside his father and listen with intent as his father narrated bed-time stories. He used to be happy and full of life. But his sweet childhood has come to a pause and he’s struggling to live now.

“It’s been 30 days that my son is lying unconscious. My son and I were inseparable, but now I spend all my time in the waiting room outside the ICU. I just want to see my son happily smiling and I’m ready to take every pain and effort for him.”  - Srinivasa, father.

Srinivasa lives in Rachapudi, Andhra Pradesh with his son Venkata (3) and daughter Manaswi (7) and his wife Anusha. Venkata had just started learning alphabets and numbers in school recently. He used to be so excited to go to the school that he would be the first one to wake up and pack his school bag. Every day he would be the first one to reach the bus stop along with his elder sister and eagerly wait for the bus so that he could reach the school earlier than everyone else.


Venkata with his elder sister Manaswini

“He loves playing with his elder sister. He used to constantly run around the house, playing with cycle tires. Every time I take him out with me, he refused to come home until I bought him the toy that he really liked. And every night he would sleep beside me clutching the toy tightly. Looking at him all happy and cheerful, I never thought anything bad would happen to him.” - Srinivasa, father

Two months back, Venkata started having fever along with uncontrollable fits. He even started developing painful rashes over his entire body and had difficulty in breathing. His parents were terrified and took him to a local hospital in Ongole, Andhra Pradesh. He was kept in ICU for six days in the hospital but much to their despair, his condition only worsened.

As per the local doctor's advice, Srinivasa took his son to a multi-specialty hospital in Vijayawada, Andhra Pradesh. After a series of tests, Srinivasa was told that Venkata has abnormally high white blood cell count in blood because of which he has an infection. He was also diagnosed with severe pneumonia and drug rash with eosinophilia and systemic syndrome (DRESS), a type of allergy which occurs as a reaction to different medication. He’s been kept on ventilator support for 30 days and he needs a few more weeks of ICU stay to recover.


“ I don’t know what was happening to my son. His entire body was swollen and he would constantly complain about the pain in his legs. The doctor said that he is making progress with each day and he only needs to be kept in intensive care for a few more weeks.” - Anusha, mother.

With the little meagre Srinivasa earns by cultivating crops on his tiny piece of land and by working on other farms, he needs to look after his family expenses and his children’s education. But now gathering lakhs of rupees for his son’s treatment with the little income he earns is next to impossible for him. By borrowing an amount of 3.5 Lakhs from the people he knows, Srinivasa could look after the expenses. However, he’s now on the verge of exhausting all the money he borrowed and needs 20 more lakhs to help his son recover.

Srinivasa cannot imagine losing his son who had just started reciting the alphabet and learning his numbers. He took every pain and effort to save him and even borrowed huge amount. Poor father now has no money left and is in dire need of help.

Your contribution can help this poor farmer save his son 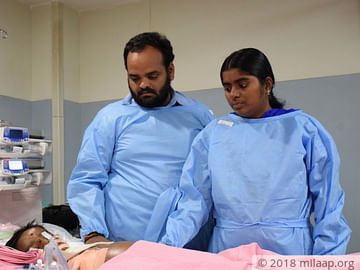