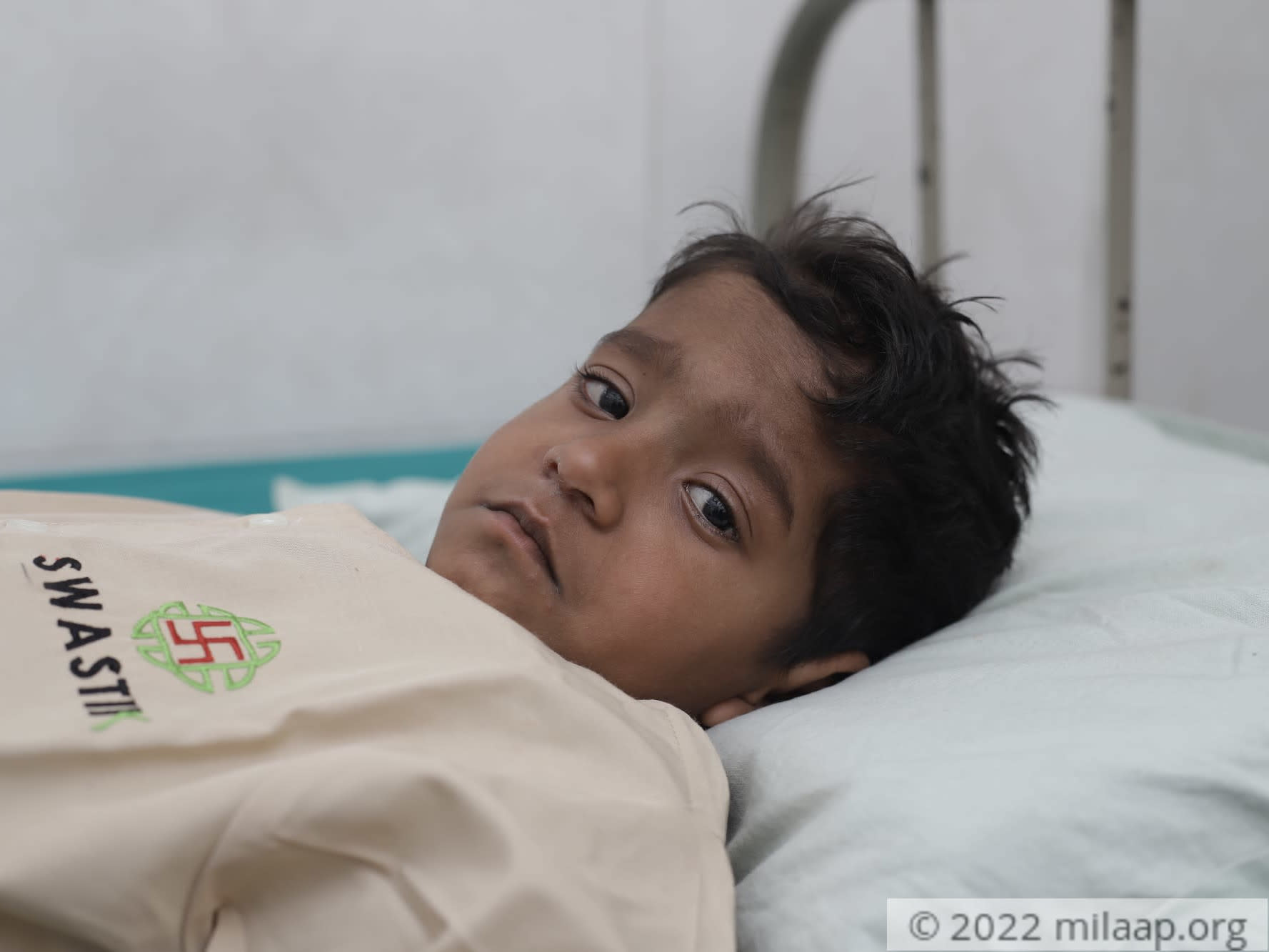 “About 4 months ago, he fell very sick. He was so weak that he was unable to even stand on his legs, and couldn't stop vomiting everything he ate. We didn’t know what the problem was, but we were relieved to see that he got better during the short hospital stay. I thought he’d be okay as long as we followed the doctor’s advice. But, I never expected that in a matter of months such a thing would happen, and we’d be completely helpless because we have no money!” - Pinki, mother

It was the first time that 8-year-old Uttam had fallen severely ill in his life, and following his hospitalisation, his parents practised extreme caution with regard to his health. But in late December, they found a huge lump below his knee, which became a cause for worry. Without wasting any time, they immediately brought him to a doctor, and from the various scans and test results, they found out it was a cancerous tumour.

“I heard the word cancer, and I felt my head spinning. I couldn’t believe it! Despite being so careful, and following medical advice, how could this have happened? We put in everything we had and even borrowed from our relatives so he could get a surgery to remove the tumour. I thought with this, all our worries would end and our son would be okay. But we were wrong again. In a span of a month, the tumour grew back and is now worse than before…” - Pinki

He suffers from an extremely rare cancer

Uttam was diagnosed with Ewing sarcoma, a cancer that occurs in the bones or in the soft tissue around the bone. In Uttam’s case, it manifested in the form of a tumour on the shin bone, and has now metastasized (spread) to the tissue. He needs urgent surgery, followed by prolonged treatment to recover.

From word of mouth, his parents learned about a bigger and more equipped hospital in Delhi that could help Uttam. So they set out to the capital, from their small hometown in Mirzapur, Uttar Pradesh, hopeful that they could get the help they needed. But once there, they found out that his condition had progressed to the point where he is now a high risk patient and needs immediate medical intervention.

“We were absolutely crushed! The tumour grew and spread so quickly that we hadn’t even known until we came to Delhi. His entire leg is red and swollen now, and he can barely stand on his feet. We have to carry him, everywhere we go. It’s so painful for him, that he cannot bear it and cries incessantly. The doctor said he needs immediate treatment, else his chances of survival will be very slim…” - Pinki, tearfully

Their child’s treatment is out these poor parents’ reach

Uttam’s condition is deteriorating rapidly. With each passing day, he’s losing his life to cancer. His parents are in an extremely difficult predicament. Their poor financial condition will never be able to make his treatment available to Uttam. Both Pinki, and her husband, Bupender, are daily-wage labourers earning INR 350 a day.


Between footing their ailing child’s medical bills and taking care of a newborn, they’re struggling to make ends meet. Their son’ treatment will cost these parents INR 50 lakh, an unimaginable sum for them to bear. They are in such dire straits that they don’t even have the money to afford any of Uttam’s preliminary tests or medicines.

“Since my wife had our baby, not too long ago, I am now the breadwinner and my family is entirely dependent on me. I can’t even be there with my son while he’s going through all this, or we won’t be able to eat that day. It’s so cruel that we have to suffer like this. My child, he  is fighting for his life now, and we can’t do anything to save him because we have nothing! We are already neck-deep in debt and struggling to repay the money we borrowed. What are we supposed to do, in a situation like this?” - Bupender