2-Year-Old Has Only Few Days To Get A Brain Surgery Or He Will Be Paralysed For Life | Milaap
loans added to your basket
Total : 0
Pay Now

s
You are sending a message to
sanat.boro
Go back

Shares
Shares
Share on whatsapp
It was 6 in the morning and Sultan Ali was just getting ready to leave for work when he suddenly heard his wife scream. He rushed inside to find his 2-year-old son, Tyahiya, in a horrible state.

“Even now if I close my eyes I can see that sight. There was blood coming out of his mouth and his entire body was shivering. He couldn’t even cry out in pain. I held him in my arms and tried to calm him down, but he was shaking vigorously. By the time, I managed to take him to the doctor, he had already lost consciousness. I thought he would never open his eyes again,” - Sultan Ali, father.

The boy opened his eyes again after 5 long days

Sultan and his family hail from a small town in Assam - Barpeta. When the local doctors there gave up on Tyahiya, Sultan took him to Guwahati in an ambulance. Tyahiya was immediately admitted to the ICU, once they reached the hospital.


“I was scared to death. I was new to all this  - a big city, a big hospital. I didn’t know if I would get my son back ever. I saw them take him to the ICU as I looked on like a bystander - helpless.”

After 5 long days of struggle, Tyahiya opened his eyes. But he is not out of danger, he still needs to stay in the ICU.

Tyahiya has MoyaMoya disease - arteries in his brain is narrowing down, it has almost stopped the blood flow to his brain. The right side of his body is paralysed - he can’t move his arm at all.

“He opens his eyes for few seconds and shuts them instantly. He is hardly eating anything, the times when he is awake he is whimpering in pain. Doctors have told me that without the surgery, he will be paralysed for life. I sit beside him and cry helplessly - where will I arrange so much money?”

Sultan has sold everything he had, it's still not enough

A daily wager by profession, Sultan earns only about enough to support his family. But the last ten days have been harrowing for this poor father. He has been spending sleepless nights on the corridors of the ICU, praying that the doctors don’t tell him that his son is no more.

“I haven’t eaten anything neither have I slept. Every hour of the day I am worrying about my son. He needs the surgery as soon as possible. I will never be able to forgive myself if I lose him.”

Sultan has promised his wife that he will bring their son home safe, she is at home taking care of their younger son. The parents are living in the fear of losing their son, with your help they can save him 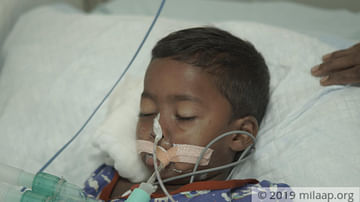 My Son Can't Move The Right Side Of His Body

Tyahiya needs an immediate brain surgery, you can help him get that