Profuse Bleeding In This 8-Year-Old's Brain Will Completely Paralyze Him Without Urgent Treatment | Milaap
loans added to your basket
Total : 0
Pay Now

"My son hasn't known any other life than suffering. He had never been to school in his life. He always lived in fear because of severe illness and terrible stomach pains. He becomes anxious if I am out of his sight even for a second. He is so frightened that he holds my hands even when I cook. Shouting and holding me was his way of expressing pain. But now, despite having a terrible headache because of internal bleeding in his brain, he hasn't uttered a word. This worries me more, I cannot imagine what he is going through. His right leg is completely paralyzed and has confined him to a desolate life within 4 walls. this disease is destroying him, both physically and mentally," - Anjamma, Sagar's mother.

When Sagar was 6-month-old, he experienced sudden bleeding in his gums and his skin developed black spots. When the couple rushed him to the hospital he was diagnosed with liver disease. But the poor parents couldn't afford to get him a liver transplant. Sadly, he was bound to his bed most of the time as Anjanna worked hard with all his might to save his son. But before he could save enough money, Sagar's condition deteriorated drastically when he turned eight. His stomach was painfully swollen and now frequent high fevers have worsened his condition.


"We were told that he wouldn't survive without an urgent transplant. We felt incapacitated by our poverty. We couldn't save a rupee for the treatment, at the end of every month we used to end up spending on his regular health checkups and medicines. Thankfully, a few kind people funded his liver transplant and I donated a part of my liver to save my son. Our happiness knew no bounds when we realized how our little son fought the biggest battle of his life. A month after his transplant, I held his hands and told him that he will have a new life soon. Even before he could respond, the right side of his body started shaking violently. All our dreams turned into ashes within a second." - Anjamma.

Now, bleeding in the brain causes sharp pains in this 8-year-old's brain

8-year-old Sagar is suffering from bleeding in his brain because of which his right hand and right leg were paralyzed after sudden seizures. However, his right hand has recovered slowly but he his not out of danger yet. He urgently requires treatment in intensive care for 14 days without which the bleeding in his brain cannot be controlled and it can be life-threatening. The poor parents have managed to start the treatment but are struggling to continue it.


"When my son had frightening seizures, he lay unconscious for three long days. I cannot express how I had been trembling with fear until he opened his eyes. For a couple of days, he did not recognize any of us. The mother in me was crying and hoping for the moment when my son would call me 'Amma'. He frequently suffers sharp pains in his brain and when he shuts his eyes tightly I know he is going through excruciating pain. But helplessly watching your son suffering is the most dreadful situation for any mother. I try not to cry in front of him. All I am able to do is to place my hand on his head reminding him that he is not alone." - Anjamma.

Anjanna is a daily wage laborer who can barely find work only 20 days in a month. Being the sole breadwinner of the family, he struggles to feed a family of five. Providing education for two children and taking care of his other child who is fighting every second for his life has always been a difficult challenge to him.

"We have always wished a better life for our son, but despite our best efforts, we couldn't even afford proper medication for him. The days my husband cannot find work, we starve to feed our children. The life-saving treatment for our son costs 4 lakhs which is above our means. We have borrowed 1 lakh and striving to keep him alive. We have nothing to save him, please help our son survive." - Anjamma.

At the age of attending school along with his siblings, 8-year-old Sagar who never had the glimpse of the world is battling for his life. Sagar is suffering from bleeding in his brain which has completely paralyzed his right leg. Only urgent treatment in PICU care for 14 days can save this little one's life. The poor couple has done everything they could to save their child but they have exhausted all their money. They cannot afford the treatment that can save their son.

Your kind contribution can save Sagar 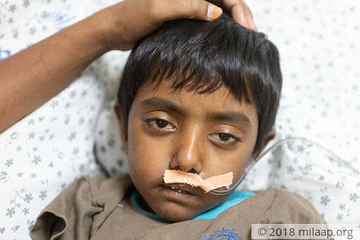 Only urgent treatment can save this 8-year-old's life