‘She Was Born After Two Miscarriages… Now She Has Cancer And We Could Lose Her’ | Milaap
Receive tax benefits by donating to this cause. 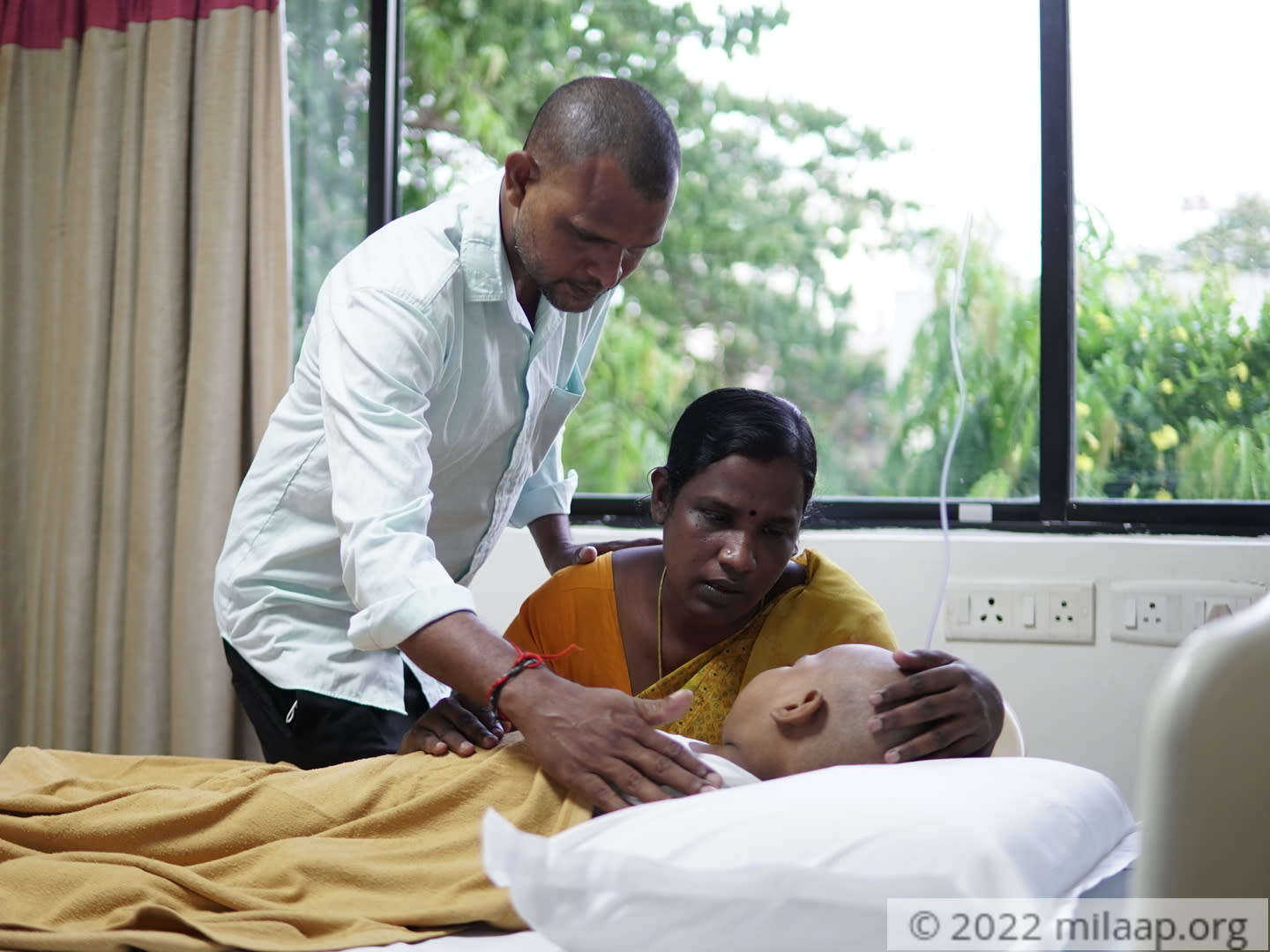 “We waited six years after marriage for a baby of our own. My wife Parimala had two miscarriages that left us heartbroken. We had given up hopes of becoming parents until Tanisha came into our lives. But we might end up losing her too.” - Rajan, father of 3-year-old Tanisha Sri

Little Tanisha Sri’s birth marked a significant change in Rajan and Parimala’s lives. They had been struggling before, without anything to be happy about or look forward to. After her arrival, Rajan's focus shifted to building a better life for his family - he started working and earning more at his job. Parimala’s health had also improved, and she gave birth to Tanisha’s baby sister, the following year.

“Everything was going so well, but somebody cast an evil eye on our joy. Tell me, how else could this happen to our little daughter? God gave us happiness, but he is also taking it away from us now,” says Rajan.

Rajan is referring to the dangerous disease that has taken a hold of his precious daughter. Tanisha is suffering from acute lymphoblastic leukemia, a type of cancer of the blood and bone marrow that affects white blood cells. It is a rapidly progressive cancer, which needs immediate and continued treatment for the best chances of survival.

Tanisha Sri’s birthday was always a grand affair in the household. Her parents made sure to celebrate it using whatever limited means they had. Her wide smile, after all, ended all their worries at the end of the day. It is the only thing that mattered. Her third birthday in February this year was no different - except a few days after it, she got very sick.

“She got a grainy swelling on her neck. We took her to the doctor, thinking they would give us some ointment to apply on it. But they told us to do a bone marrow test… for cancer! We were shaken. Cancer? How could our little one have cancer? She wasn’t exposed to anything poisonous. When the confirmation came, I couldn’t eat or speak to anyone for days.” - Parimala, mother.

Parimala had dealt with depression in life before - when she had the two miscarriages before Tanisha’s birth. But now, it has come for her again. She cannot see her little one suffering, and blames herself for the fate of her baby girl.

“Seeing her struggling to walk after the central line was put on her (for chemotherapy) broke my heart. She cannot eat well, so neither do I. If she is suffering, what gives me the right to go on normally with life?” cries Parimala.

This father had to mortgage his home and sell off everything he had, but that is not enough

Rajan does not have a permanent job as he has not even passed class 10. Though he works as a part-time driver, he was able to run his household smoothly before his daughter got sick. Just to fund her first round of chemotherapy, he had to shell out Rs 6 lakhs, by mortgaging his household and selling all of his wife’s jewelry.

He did so without thinking of the future as in his own words, “There is no future without my daughter being in it”. But now, he has completely run out of money and is finding it difficult to even provide two square meals a day for his family.

These parents do not wish for anything but their daughter’s good health. You can extend your support in saving Tanisha Sri. Click here to contribute.
TS
Patient Tanisha Sri R is 3 years old, living in Chennai, Tamil Nadu
AC
Being treated in Apollo Cancer Institutes, chennai