I Feel Like I Put Him There, That It's My Fault My Son Is Dying | Milaap
loans added to your basket
Total : 0
Pay Now

I Feel Like I Put Him There, That It's My Fault My Son Is Dying 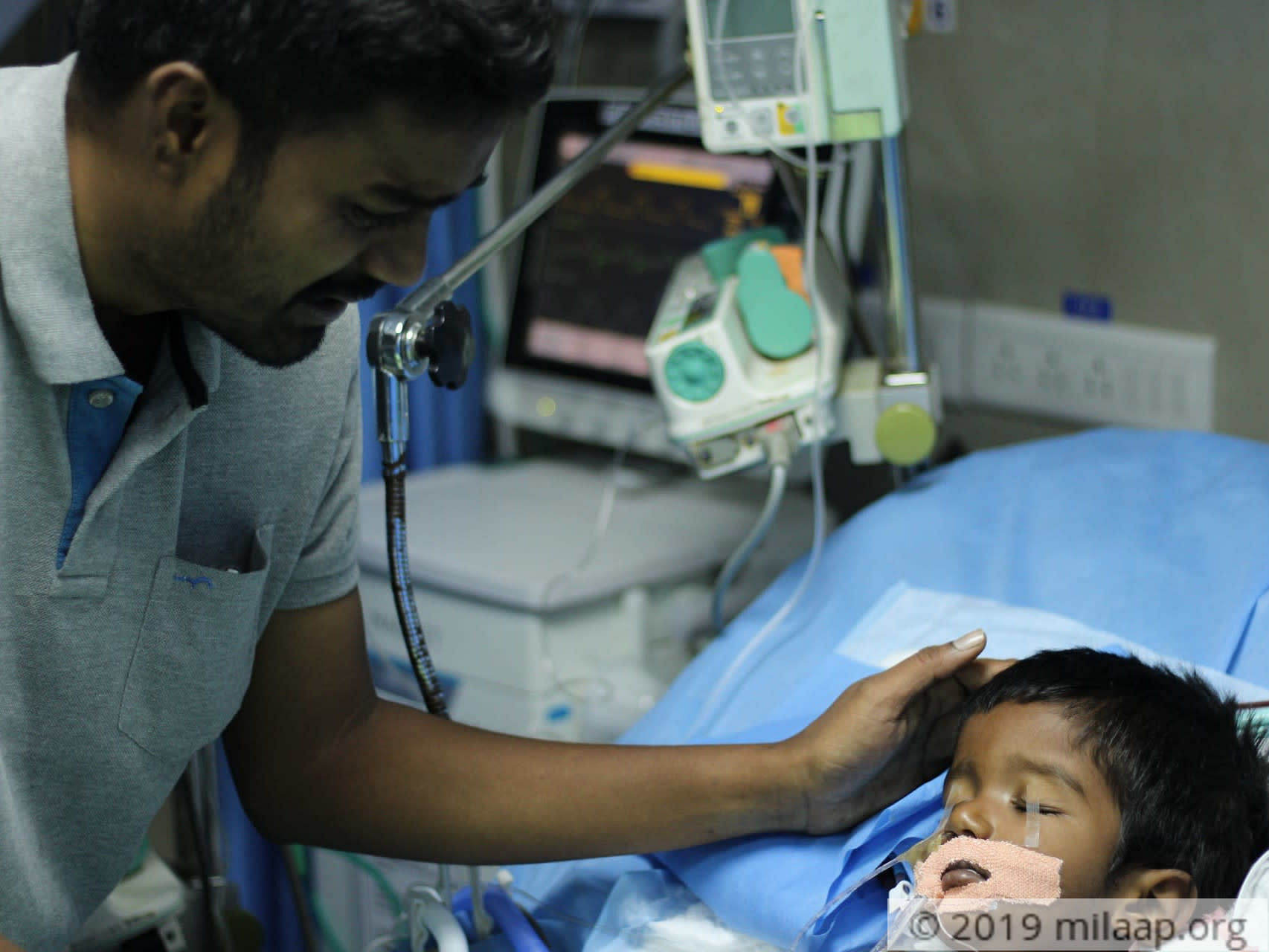 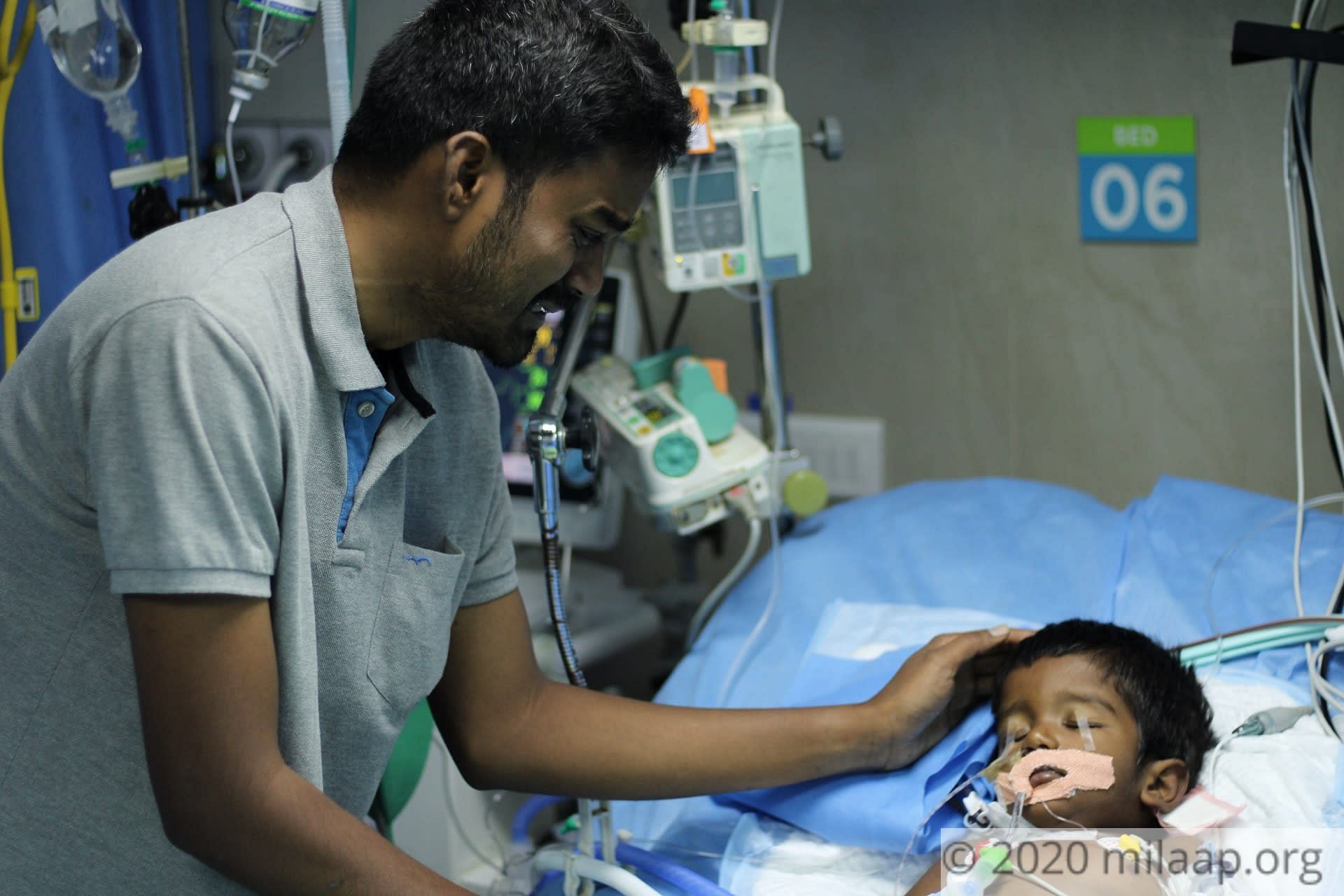 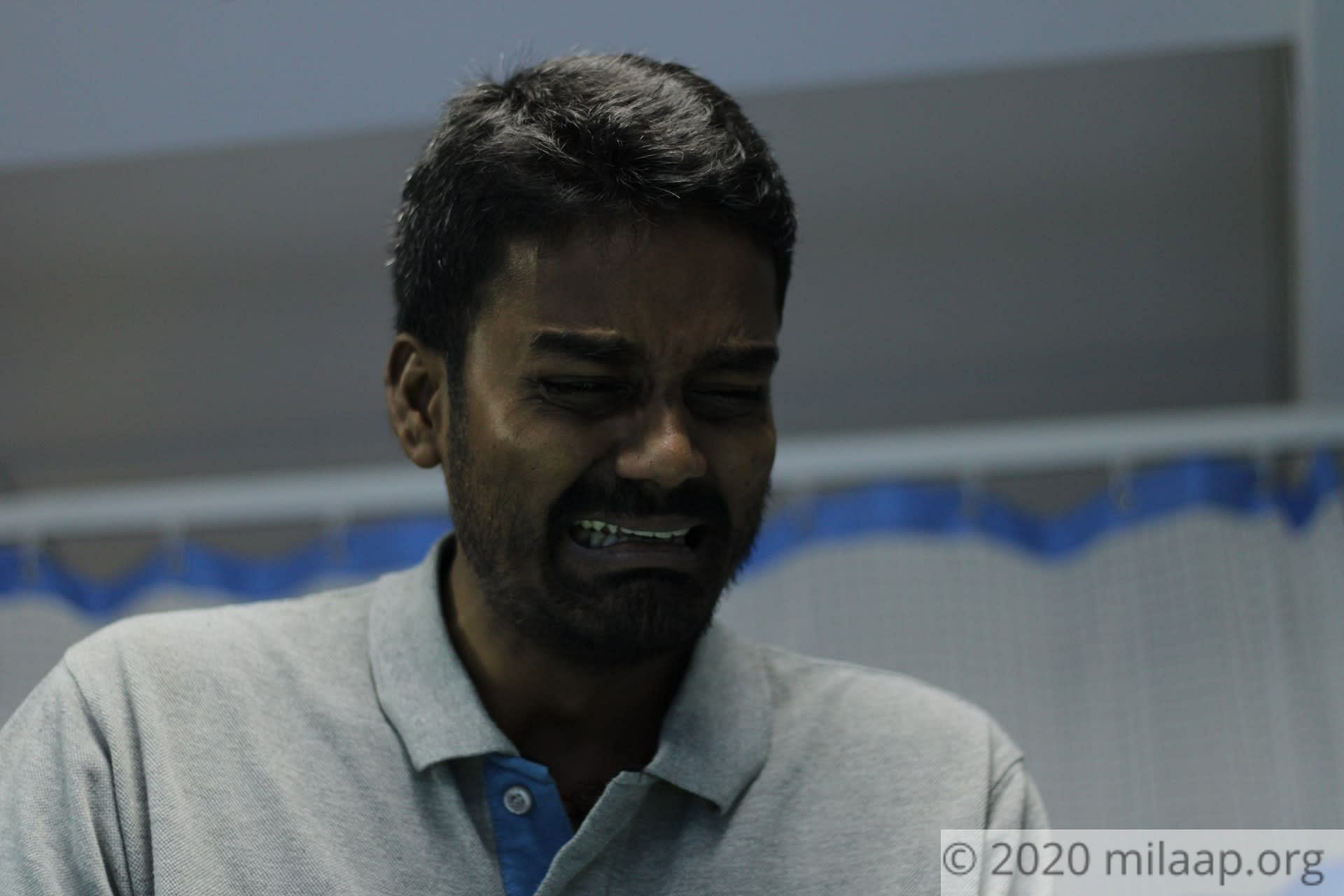 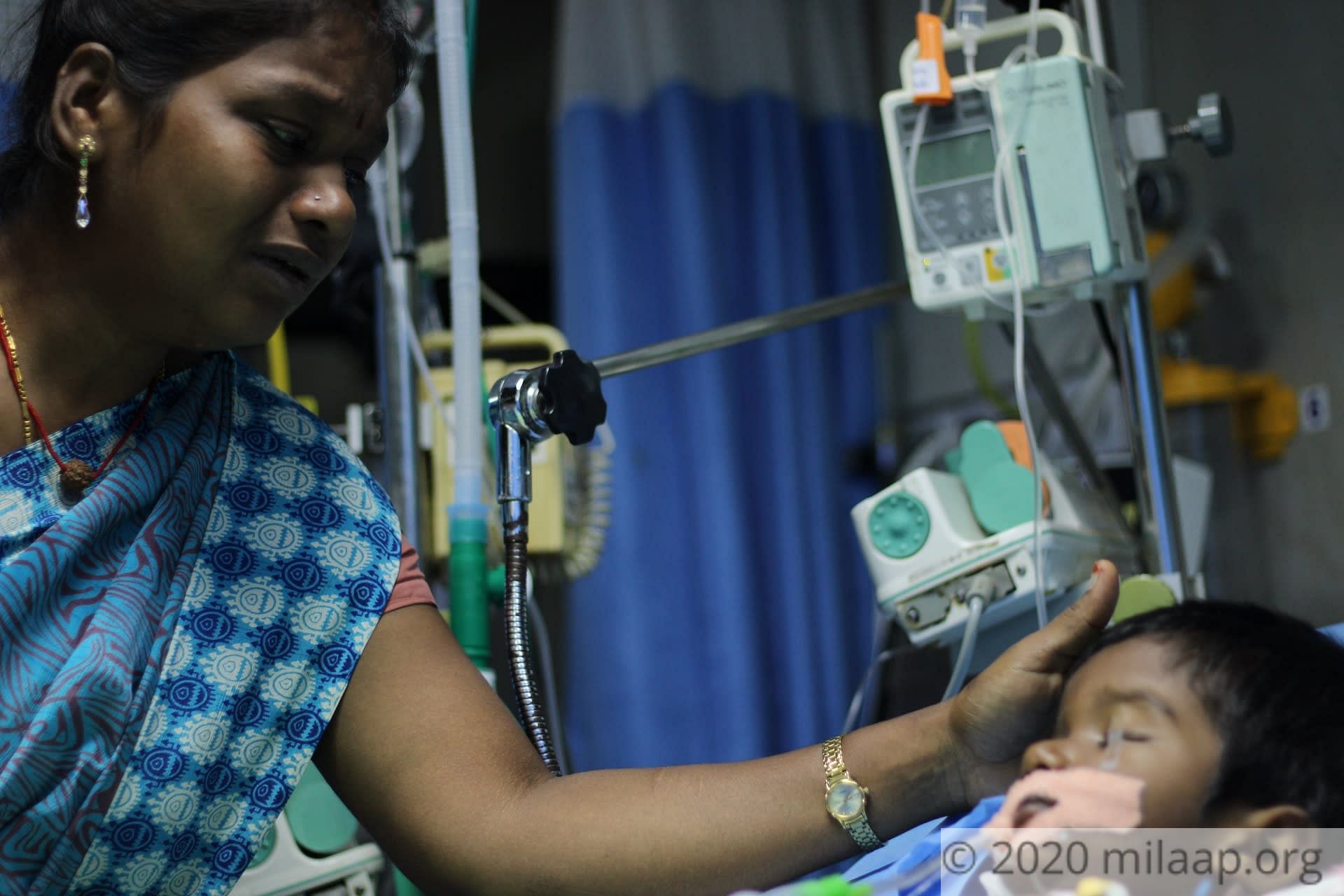 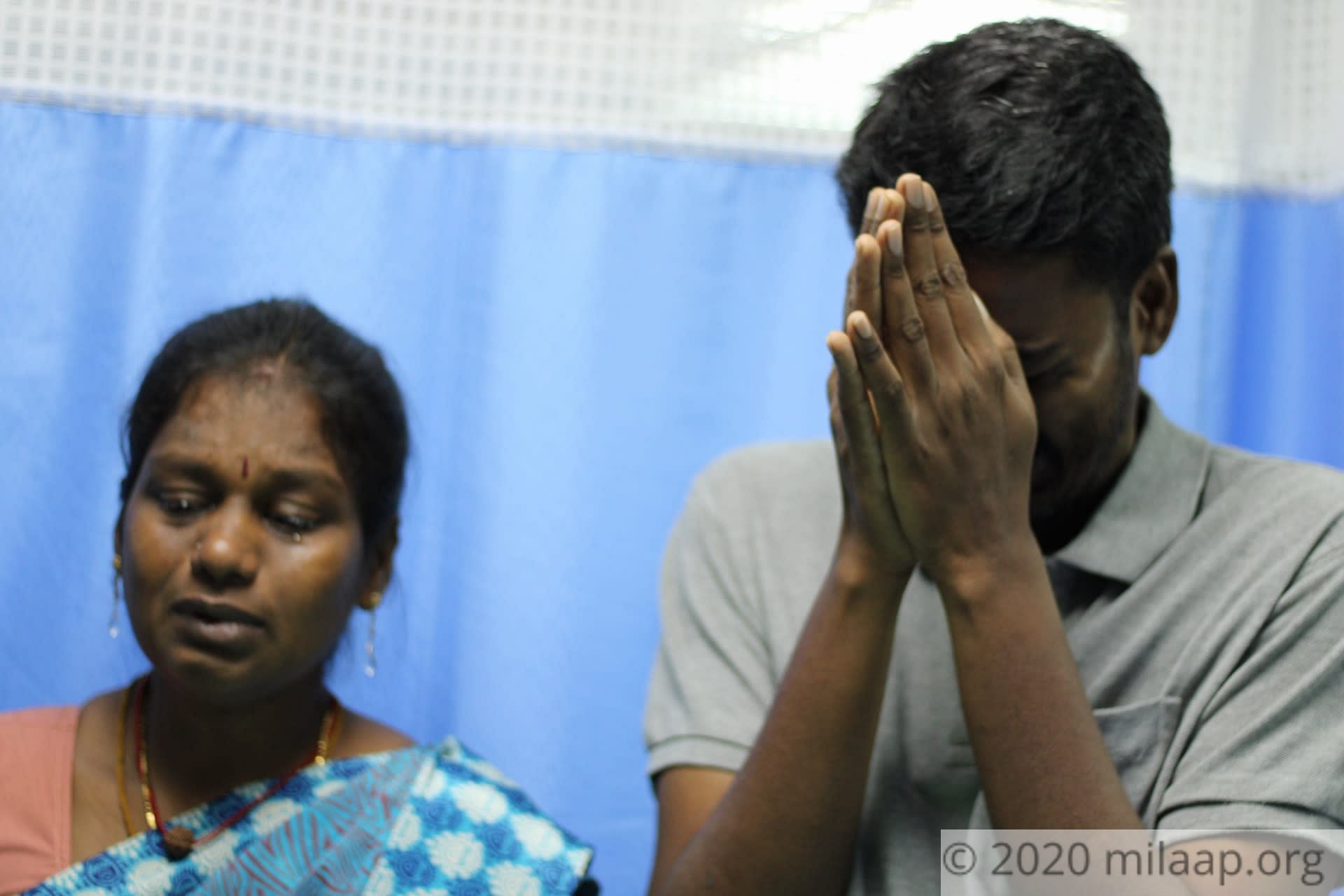 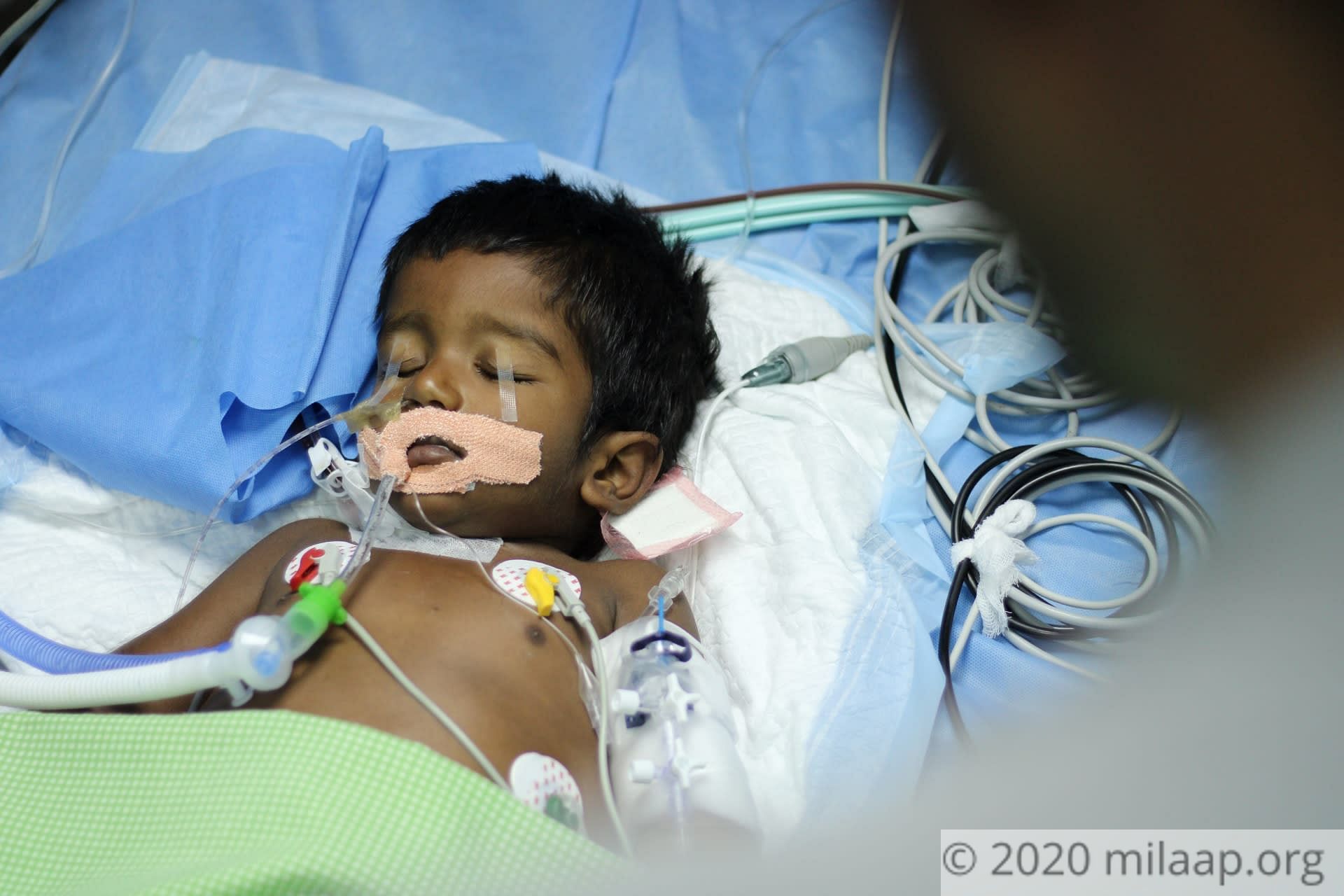 Share on facebook
Little Tamilvasagam is just 3, but he is already friends with all the people in his neighbourhood. Bubbly and caring, this baby boy is everyone’s favourite. Keeping him quiet and out of trouble was a herculean task for his parents each day. He would happily accompany his father to the temple, and the only time he would be quiet is for those few minutes that he prayed. But now, Tamil lies unconscious in the ICU. Chidambaram stands by his side, praying that he wakes up and at least calls him appa once.

"It was just a normal fever and only later we found out that he had dengue. Before we could even treat him, most of his organs started failing. My child is now in the ICU fighting for his life. I cannot bear to see him lay still…this quietness is killing me. I want him back!"  - Chidambaram

I now feel responsible for his pain

Tamil was admitted in a local hospital three weeks back for fever. Due to negligence at the first hospital, it took more than a week for them to diagnose that he had dengue. By then his stomach started bloating, making his condition life-threatening. His parents rushed him overnight to another hospital in the city and he was immediately put in the ICU.

“I should have taken him to a better hospital sooner. I didn’t have enough money…I now feel responsible for his pain and suffering. My Tamil used to wait for me till I'm back from work so that he can go for a ride in my bike. He eats his breakfast only if I feed him. He loves me more than I could ever imagine but I failed him…I failed as a father. He was scared and crying. He didn’t let go off of my hand when we had to leave the ICU. He hasn’t woken up since then."

Baby Tamil is experiencing severe symptoms of Dengue which has damaged his kidneys and liver. His blood pressure levels have dropped dangerously low and there are chances that the sepsis (infection) can spread to other organs. Right now, he is under multiple antibiotics, supportive measures and undergoing treatments for kidney failure. The positive news is his condition hasn’t deteriorated for the past few days and there are high chances that he will survive this.

Time is running out - this devastated father needs your help

“My only relief is his doctors hope that with steady treatment for the next three weeks he can recover. He won’t need the support of machines then. But the cost to save him is something that I never imagined. They want me to pay 20 lakhs within a short time. After begging and borrowing I could manage to gather only 80 thousand. I don’t even own a house or land to sell it. Time is running and I’m worried about how to save my child’s life. I don’t want to be irresponsible again. This is my last chance to save him”

Chidambaram works in a polytechnic college for a modest salary of Rs. 15,000. With not enough savings and no support from the family, he is struggling hard. He has no options left to save his son, who is fighting with all his strength to break free from the machines that are keeping him alive. His little boy deserves to live and needs help at the earliest.

3-year-old Tamilvasagam needs your help to fight his disease that is slowly killing him. You can help this little kid

May he get well soon! God bless

1013 others have contributed
Click here to know more about Tamilvasagam

Donated to this campaign via Bank transfer/QR Code? Click here if you can’t find your donation listed below.
A
Amudha donated Rs.100,000

May he get well soon! God bless