4-Year Old Wishes For His Blood Cancer To Vanish Soon, His Condition Tells A Different Story | Milaap
Receive tax benefits by donating to this cause.

4-Year Old Wishes For His Blood Cancer To Vanish Soon, His Condition Tells A Different Story 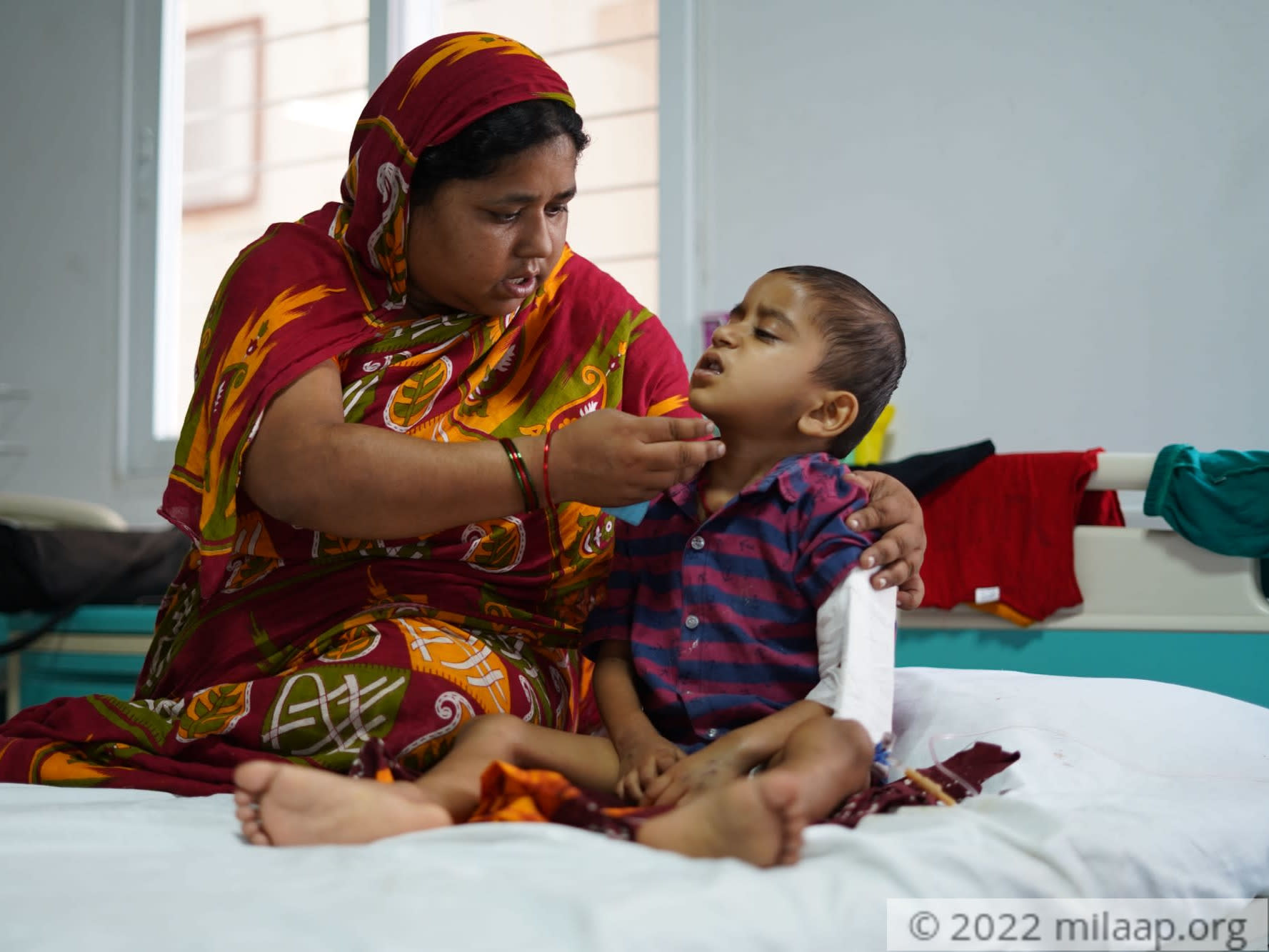 Share
In April, 4-year old Taj was supposed to undergo a crucial surgery to remove a tumor under his left ear. Soon, his family learned that it wasn't actually a tumour but a major swelling resulting from a deadly blood cancer ravaging this little boy's body.

"At 6am, when I opened the door of our house to leave for Taj's surgery, I vividly remember seeing the entire village outside our lane. It was the day of Eid and they had all woken up early just to offer namaz for my son's health. They all donated about 100 to 200 rupees and handed me close to 12,000 rupees for Taj's treatment. That gesture overwhelmed me so much, knowing Taj had touched their hearts with his love, and how losing him would crush all of us beyond words can explain." - Milan, father

For the past 4 months, Taj had been running very high fevers despite medicines. There were multiple swellings all over his body, but the most prominent ones were under his left ear and eye. His ear swelling worsened so much that it was mistaken for a tumour, and the pain was making it unbearable for him to even speak. Soon, his left eye too started getting visibly disproportionate, and that frightened his parents.

"On the day of surgery, they asked us to take him back home because his surgery can't happen. At first, we thought it was because we couldn't arrange the whole amount. We kept begging them to tell us the truth but they just told us his reports were not right and that we should take him to a bigger hospital urgently if we want to save Taj. My heart started pounding and I began panicking because that was something even farther from our reach now." - Papina, mother

His cancer is aggressively destroying his healthy blood cells

Taj's complete blood reports indicated a sudden spike in his white blood cells, which instead of fighting off the bodily infections were spurting out cancerous cells. Those reports clearly indicated that this poor little kid has acute myeloid leukemia, a type of blood cancer. Now, Taj needs chemotherapy at a stretch, because his cancer has considerably progressed due to delay in detection.

Hearing about Taj's cancer, Milan took all the money that he saved for Taj's surgery and overnight, sent his wife and son alone to Bangalore from Kolkata for immediate treatment.

"Seeing my son's eye swell like it would pop out any time, terrified me of how his life was at stake, every passing minute. They admitted him and immediately started his chemo for 7 days, back to back. I thought that just a week's chemo would be enough to cure his cancer and that I could take him back home. But the news of him needing another 6 months of hospitalization for his critical condition left me shocked and heartbroken." - Papina, mother

After a week of chemotherapy, Taj's white blood cell counts have lowered to 500 as against the normal range of 4000 to 5000. This puts him at an extremely high risk and a constant need to be monitored because his body is no longer capable of fighting off any infection on its own. Sending him back home, in this condition, can be fatal for this little kid but with funds running dry for this family, arranging INR 10 lakhs to keep him here is way beyond their means now.

It's been a month that Milan hasn't seen his son because he can't afford to miss a day's wage. He longs to hug his son but doing that would mean not being able to send money for his medication. A generous contribution from your end can help 4-year- old Taj fight blood cancer.
T
Patient Taj is 4 years old, living in Howrah, West Bengal
VI
Being treated in Vydehi Institute Of Medical Sciences And Research Centre, Bengaluru, Karnataka