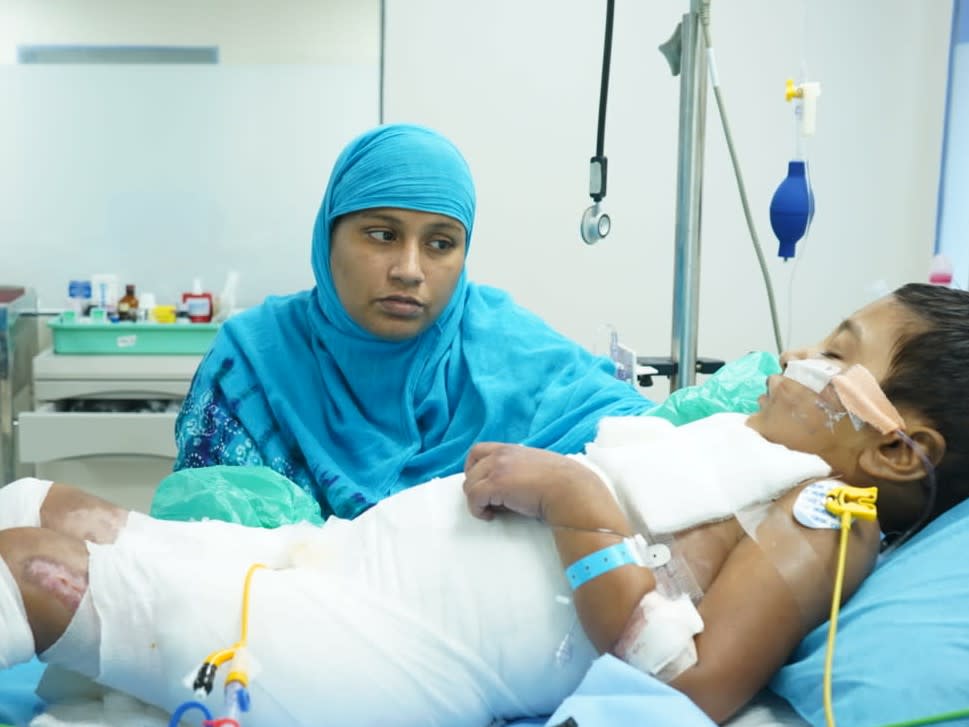 “I nearly fainted when I saw him. On the phone call, my sister-in-law had told me that he had fallen into a bucket of hot water. In my head I’d pictured him crying, his skin all pink and maybe a little swollen, and that itself was enough to make me want to break down into tears. But when I rushed over to their house and saw him in person, my family had to hold me to keep me from collapsing!
My four-year-old's skin was peeling off from his face, his chest, in big patches! Revealing what looked like bright red flesh underneath! He was screaming like he was dying, his eyes almost entirely rolled back in his head! And for one moment I couldn’t help but wonder either if... if my baby really was going to die!” — Shahin, mother

Shahin hadn’t wanted to believe that it really was her Mohammed sitting there with skin peeling off of his body, but his screams had snapped her into action. With no time to waste, they had hailed an auto-rickshaw and rushed to a local clinic.

“The doctor there did some quick first aid and then asked us to take him to Chennai immediately, saying his burns were way too severe. We gathered all our money, borrowed as much more as we could, then travelled to Chennai the same day by road.”

Little Mohammed had been extremely excited on the morning of January 1, 2021. Not because it was the new year, but because his mother had given him 4 pieces of chocolate, without him even having to ask! He had run right away to his grandma’s house, just across the street; some of his cousins lived there and he’d wanted to share his treasure with them. But tragedy struck when the little one didn’t notice the bucket of hot water sitting near the bathroom, and tripped and fell right into it. He screamed and struggled to get out, but by the time the rest of the family got to him and pulled him out, the damage was already done.

This 4-year-old will die without your help

“He’s been in the ICU ever since we got to Chennai. For a while it had seemed like he would recover with just medicines but then suddenly his condition became critical and he lost consciousness! They told us that his wounds had developed an infection, and it had travelled to his brain! We had to make him undergo emergency brain surgery. All our money is gone - the only thing we have left is a mountain of debt, and a dying son. Please, you’re our only hope...