When we see our 3-year-old son unable to eat even basic liquid food, we stop wanting to eat too. | Milaap
loans added to your basket
Total : 0
Pay Now

When we see our 3-year-old son unable to eat even basic liquid food, we stop wanting to eat too.

Shares
Shares
Share on whatsapp
Little Swaroop begs for water to his mother. The hesitant mother gives him some, but within an hour, he vomits and collapses. Unable to see their 3-year-old son suffer without being able to take in even simple food, the parents, Sarla and Satyam have decided to stop eating.
Swaroop is a 3-year-old with a metabolic disorder. This means he is unable to convert food to energy and his body turns inwards, digesting his body protein to make up for it. This is a painful, deadly condition and the only cure for Baby Swaroop to get a liver transplant.

Swaroop needs a liver transplant, but it is a price for his life that the family can't afford

To Sarla and Satyam, Swaroop was their dearest wish come true. His birth was a very happy occasion “We really wanted a child to love and bring up. He was born 6 years after we got married – when we had almost given up hope,” says Satyam.

Swaroop's birth was a very happy occasion for the family. Before the sickness, he was a happy, curious baby.

For a whole year after he was born, Sarla and Satyam felt like their world was perfect. Satyam had worked over 12 years as a goldsmith worker in Warrangal. His supervisor trusted him and he had regular work – which meant a monthly income to take care of his wife and child.
But after that first year, Swaroop's health took a downturn. He became sick, unable to keep his food down. Slowly, this family's happiness turned to sorrow and despair. They took Swaroop to doctors near their home in Warrangal, but no one could properly diagnose his condition correctly.
Swaroop before he became sick
Eventually, they decided to come to Hyderabad for better treatment. Here, they were told that the only cure for Swaroop was a liver transplant. Their hope and relief at an answer were short-lived because the procedure is far beyong Satyam's limited means.

“Doctors say he needs a liver transplant. But everywhere we go, they ask for 25 lakhs. Even if I work my whole life, I won't earn that much. How will I get this much money? It is a price for our son's life we can't afford,” Satyam says.

Swaroop begs for water. He cannot eat solid food and needs to be carried around.

Swaroop is growing, but his body is unable to sustain it because it does not get nutrition. He is saying his first words – asking for water, or to be carried. But when he walks, he needs to sit down after some time. The high energy of children his age is not a gift he has been given.
Watching their baby suffer over the last 2 years has not only emotionally drained Satyam and Sarla but also affected their own health. They also suffer regularly from weakness and fever from skipping meals and exhaustion due to travel. Only the thought that their son needs them keeps them going.
Swaroop is on a strict liquid diet - which can also become too much for his body to handle. It has affected his strength and growth

“He is supposed to be on a liquid diet, but even that is not always retained. Once a week, he vomits, becomes weak and falls sick. Watching our baby suffer this way is a punishment. None of us at home feel like eating when we see him,” explains Satyam.

Satyam and Sarla together earn Rs 11,000 per month. Satyam works under a goldsmith and Sarla takes on small tailoring orders. They have sold off all small possessions to make sure they take Swaroop to the hospital whenever he becomes sick. Satyam has borrowed from his employer too, to keep his son alive.

These parents will lose their child if he doesn't get the transplant he needs in time. Your contribution will help two very desperate people find hope in their bleakest moments. There is no greater blessing than to help in saving this poor boy's life. 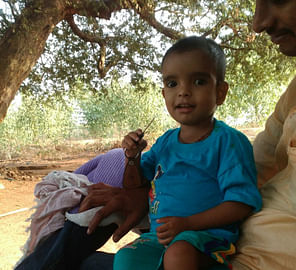 Swaroop's parents are worried about Swaroop. Let their poverty not be a reason they lose him.