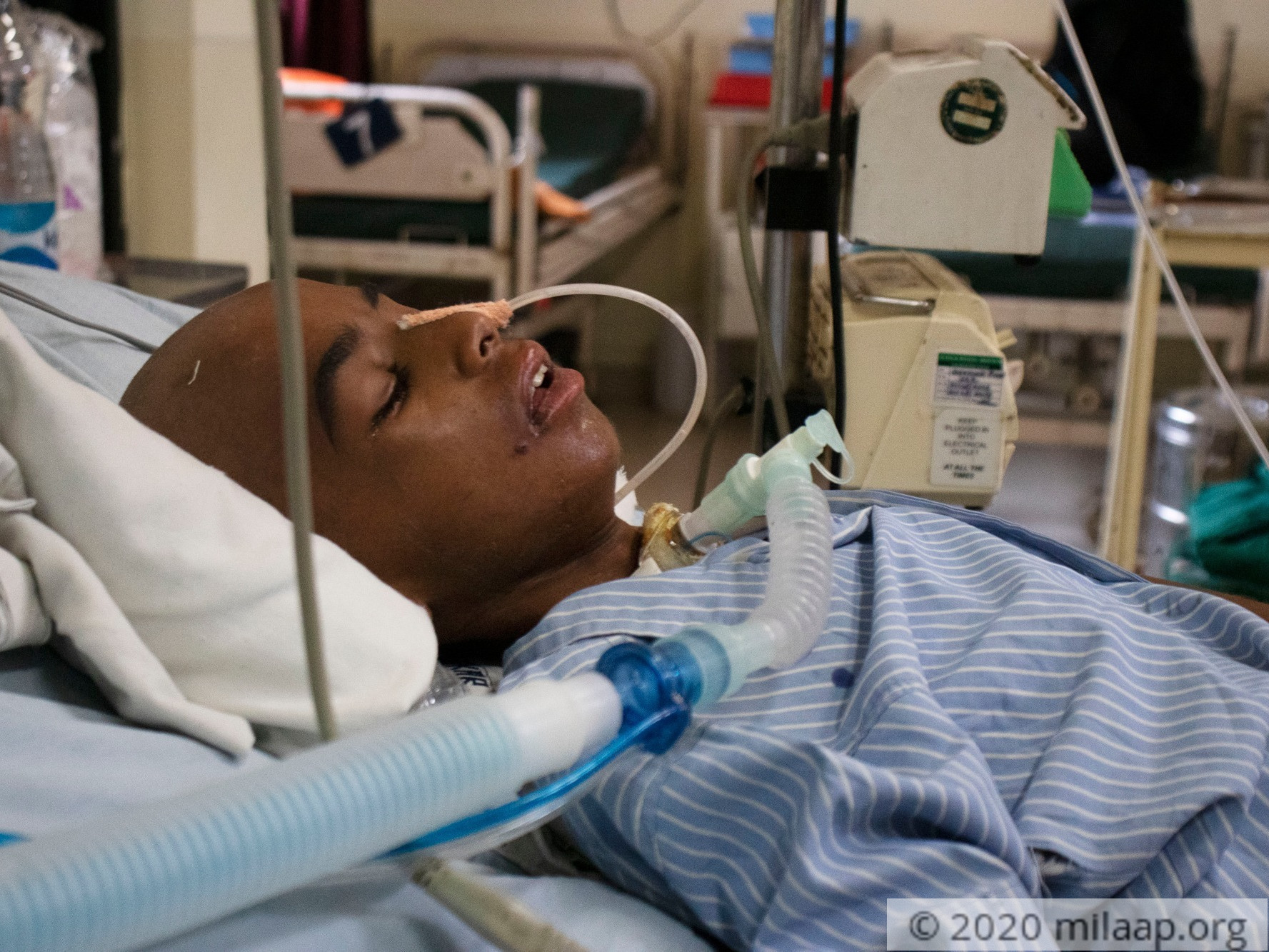 Share
I can’t afford my son’s treatment as I’m out of money and I can’t get more as I’ve already borrowed as much as I can. I can’t even share any of this stress with my wife as I haven’t told her how bad his condition is; she herself is bedridden, I can’t risk her getting worse as well!
I’m running out of options, and my son is running out of time!
Until April of this year, 11-year-old Suresh had been a perfectly healthy and active little boy. He had rarely, if ever, gotten sick in his life. He was great in school as well; he was his teacher’s pet, consistently earning the top rank in his class. But all this changed that evening.

“He had come home from school, and I could tell something was wrong. He had a high temperature, and soon he started vomiting. The next morning, he fell onto the floor trying to get out of bed! When he got up, he couldn’t walk properly, he kept stumbling and tripping over his own feet!” — Raghu, father

By the time they reached the hospital, Suresh had fallen unconscious

“I didn’t understand what was happening to him, so I rushed him to the nearest big hospital in an auto, around 15km away. The whole way he kept calling out to me, saying ‘baba, baba’. The first few times I responded, but then, to my horror... I realized my son couldn’t see me! He wasn't calling out to me, he was wondering where I was! By the time we reached the hospital, he had fallen unconscious.”

Suresh had been taken into the ICU immediately on arrival, his breathing erratic and his pulse weak. Tests were run, and it was discovered that the poor boy had encephalitis: he had an infection in his brain!

Encephalitis is when the brain starts getting inflamed (swollen) trying to fight off an infection. But the skull stays the same while it expands, so the brain ends up getting crushed from all sides, leading to severe symptoms and consequences. These can be worse than the ones little Suresh has already experienced, like seizures, hallucinations, coma, and even death. Suresh needs to stay in the ICU for a few more weeks under expert medical care so all this can be avoided, so the infection can be fought off. But his father can’t afford it.

“A year ago, my wife used to tend to and milk the two cows we have, while I went out to work as a manual labourer. But then one night she suffered a massive stroke and woke up paralyzed! I’ve stayed at home since then, taking care of the cows, my son, and my bed-ridden wife, all by myself. With our monthly income cut in half, and expenses doubled due to her medicines, things have been very tight financially, but we made do. We still had each other, and that was enough for me. But now...” — Raghu, breaking down

Raghu has already taken loans from everyone he knows to afford Suresh’s care so far. His wife, poor Suresh’s mother, keeps asking on the phone how long it’ll take, how much longer Raghu’s brother will be taking care of her. She wants to see her husband and her son, and Raghu has no answer for her.
Only your generosity can help Suresh recover, and help this family reunite. Click here to donate.
SC
Patient Suresh Chauhan is 11 years old, living in Nagpur, Maharashtra
LM
Being treated in Lata Mangeshkar Hospital, Nagpur, Maharashtra