This 8-year-old With A Rare Bone Disorder Looks Half His Age And Can Lose His Life To Even A Fracture Without Help | Milaap
loans added to your basket
Total : 0
Pay Now

Shares
Shares
Share on whatsapp
8-year-old Suprith looks more like a 4-year-old because of a rare inherited bone disorder. Nothing about his life has been normal because of this disease. He hardly has friends. The kids in school bully him, and he cannot play much as even a fracture in the wrong place can be fatal. Suprith needs a cure, but his father cannot afford it.

He was too tiny for his age, and we never thought this could be the reason

Suprith was 4 years old when he had a persistent cold. Venkatesh took him to a doctor who noticed that the child was too small for his age. Venkatesh opened up about his anxiety for the child’s development. His son looked more like a 2-year-old. Surely, this was not normal.

“The doctor agreed. He said it looked like a bone disorder. We were sent to a bigger hospital for tests. After a few weeks, we received the diagnosis. Suprith has osteopetrosis. His bones are getting denser as he grows and because of this, my son’s growth is stunted. He was born with it and I did not even know.”

Medicines have not helped his condition, only a surgery can cure him

For 4 years, Suprith was on medication to treat this problem, because there was no other option. Now, he can be cured with a bone marrow transplant. However, the surgery is estimated to cost Rs. 32 lakhs, which is unaffordable for Venkatesh who makes a living with a small paan shop at Majestic.

“My income is just about Rs. 500/day. I have to care for my wife, Asha, my 1-year-old daughter, Shaanvi, Suprith and myself on this income. It has been hard, especially because Suprith’s medical expenses have been shooting up. I cannot afford that surgery no matter what I do, but this disease is keeping my son’s life hostage. I have to try to fix it.”

The disease has stolen his childhood, it can now even take his life

Osteopetrosis often known as stone bones is an extremely rare inherited disorder where the bones harden. While his bones are dense, they are weak. Hence, Suprith’s bones are prone to breakage (fracture). He cannot play, run, sit and stand like a normal child as he grows. Even the most harmless fall can lead to a major fracture.

“My son does not look like a normal child. He is 8 years old, but he looks like a 4-year-old. We have to watch him closely all day long, because he can easily hurt himself. The children at school bully him a lot. It is hard to explain his condition to anyone. He has grown into a quiet child. He does not even tell me if he is hurting physically or emotionally. It is probably why we could not diagnose him earlier.”

Suprith has no matching donor in the family who can donate for the transplant. He has to be assisted by an unknown donor. This has turned the entire operation into an expensive nightmare for the parents. Venkatesh has turned to crowdfunding for help. He is worried that if he does not find the money he may lose his son to the effects of this disease.

Your contribution can help Suprith get the treatment he deserves and save his life.

Click here to contribute to Suprith or for more details on this campaign.
Donate 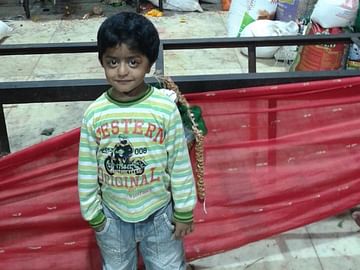 Help Suprith Get Treatment For His Rare Bone Disorder

Suprith has a rare bone disorder that causes dense bone growth and needs urgent treatment before...