Drought And Debts Have Left This Farmer With No Way To Save 7-Year-Old From Cancer | Milaap
loans added to your basket
Total : 0
Pay Now

B
You are sending a message to
Babajan.vb
Go back

“I can’t even sell my land to save my son. There’s no water or rainfall in our hometown and my crops are just not growing. All I have now is a wasteland, and no one will buy it from me. I’m already 6 lakh in debt because of my father’s illness. I have five people to feed, and no money left. I can’t save my son from blood cancer.” -Babajan, father

Sulleman’s (7) blood cancer was diagnosed amidst all their financial struggles last year in November. Babajan has barely earned Rs. 15,000 from last years crops. He had to borrow money even for Sulleman’s tests. However, the only way Sulleman can fight cancer is with a bone marrow transplant in one month.

Little Sulleman does his homework in the hospital during chemotherapy

Sulleman’s diagnosis was so shocking for Babajan and Manjeera that they took him to 3 different hospitals in Kolar to confirm the reports. He had most of the symptoms – a swelling in his neck, pain in his limbs, low blood count and swelling in his stomach. They had to take him to Bangalore for treatment immediately.


“We took a few school books of his with us. Now when he’s not too weak from the chemotherapy, he practices writing his alphabets. He doesn’t want to miss out on anything in school."

Sulleman has been undergoing chemotherapy since November last year, but it’s not enough. He needs a bone marrow transplant in less than a month.

The family has been struggling since Babajan lost his job

Babajan has now borrowed 4 lakhs from friends and family to continue his treatment. He often travels from Bangalore to Kolar, desperately looking for any help he can get. However, Babajan is helpless. He’s the sole breadwinner of the family and can’t afford the 15 lakhs needed for Suleman’s treatment.

“A few years ago I used to train teachers to use computers, but once that NGO shut down, I had nowhere to go. I didn’t get work anywhere else and had to start farming. Ever since then we’ve been struggling financially.”

Sulleman stays away from home for weeks because of his treatment. All he wants is to go back to school. Babajan now has to rely on his friend’s kindness to take Sulleman for treatment to Bangalore - he borrows his car. Babajan has left no stone unturned to try and save Sulleman from cancer, but he’s nowhere close to affording his bone marrow transplant. 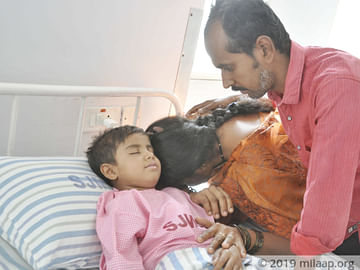 He Does His Homework In The Hospital Despite Painful Chemo, All He wants Is To Go Back Home

"I can't even sell my land to save my son. I'm in severe debt and can't afford his transplant."