This Baby Will Only Survive For Another Month Without Urgent Surgery. Parents Plead For Your Help | Milaap
loans added to your basket
Total : 0
Pay Now

This Baby Will Only Survive For Another Month Without Urgent Surgery. Parents Plead For Your Help

“My husband can’t believe it. He doesn’t want to. When the doctors told us that our daughter only has a month or two left to live, my husband couldn’t even talk. He just got up and walked out of the room, holding our baby in his arms.”
– Sultana, mother

Becoming a father had meant everything to Taimur

Growing up, Taimur had always loved kids, and kids loved him. By the time he was marriage-age, Taimur had made sure he had a stable job and a steady career, to ensure he could give his daughter or son the happiest life he could. When Sultana got pregnant, Taimur went to great lengths to ensure she was happy and comfortable all the time. And when little Sufia was born, Taimur’s life was complete… She was the most beautiful thing he had ever seen.

He thought he had everything planned out, but life had the worst surprise in store for him

“Three weeks after Sufia was born, Taimur noticed that her belly was a little swollen, and she looked a little yellow. Soon she started having loose motions. We took her to a doctor and got her medication, but two weeks went by and no improvement. Her stomach was so big by then that she couldn’t lie on her belly or on my shoulder, and she cried day and night. That’s when the doctor told us there might be something wrong with her liver, but they couldn’t figure out what.”
– Sultana

The worried parents ended up taking little Sufia to Kolkata so they could get better tests for her. In the first two hospitals they visited, doctors could still not figure out what the problem was. It was in the third hospital that they finally got a diagnosis. But it was one they wish they’d never gotten: little Sufia had Biliary Atresia, a severe condition where the liver is unable to function properly. There was no treatment for the condition except a liver transplant.

Over the next few days, Taimur and Sultana took Sufia to three other hospitals in three different cities to get her tested for Biliary Atresia, and to ask for more opinions on treatment plans. But, unfortunately for both Sufia and Taimur, the response they got from all the doctors was the same: baby Sufia needed a liver transplant. Otherwise she may only have one or two months left to live.

“Taimur hasn’t really talked to anyone, even me, after that last diagnosis. We looked for hospitals that specialized in infant liver-transplant surgeries, and brought her here. But when we found out how much these surgeries cost, it was like listening to a death sentence. I could see the hope in Taimur’s eyes slowly vanish. He hasn’t let go of Sufia since, holding her even when he sleeps. Seeing them like this, my heart is breaking not just for my daughter, but for my husband as well.”
– Sultana

These first time parents can’t even dream of affording the ₹20,00,000 cost of surgery. They’ve already sold all their valuables, and have tried taking loans from friends and family. But it’s not enough. They’re now relying on the kindness of strangers like you.
Please donate however much you can, and help save baby Sufia. Every little bit counts. 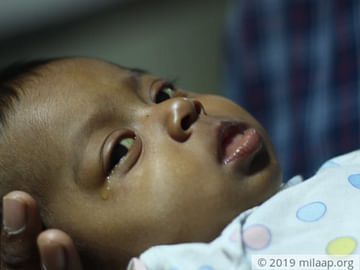 The Liver Transplant Is Beyond Their Means, But It's The Only Thing That Can Save Her