Farmer's Daughter Who Hoped To Be Married Soon Is Now Fighting For Life Against Dengue | Milaap
loans added to your basket
Total : 0
Pay Now

“We hoped to be celebrating her wedding this year, and now, we are praying for her to stay alive.”

25-year-old Srividya developed a fever in early August. While she thought it would subside, she ended up in the hospital ICU. It turned out to be dengue, and the complications have Srividya fighting to stay alive for the past month. Her father, a farmer, is struggling to keep up with the piling medical bills, while he is desperately trying to save his daughter.

It was not just a fever, it was dengue

It started with a mild fever. After a visit to the doctor and a tablet, the fever dissipated. The next day, it was back again. This time her blood pressure was very low. At the hospital, Srividya got 2 bottles of saline injected into her body. That night, she vomited over 4 times.

“By morning she was in a critical state. I have only heard of fits. That day I saw my daughter having seizures and her mouth was frothing. We took her to the hospital in Kuppam. That’s where we realized she had dengue.”

This Indian farmer family is now facing the biggest tragedy

Srividya is the oldest of three daughters to Ramesh and Jaya. They are from a small town near Chitoor, where Ramesh owns a piece of land. Agriculture is their trade, and although they have had generations of farmers in the family, Ramesh wanted his daughters to be educated.

“My daughter holds a degree. She was even working for a few months in Hyderabad, but we were looking for a groom, and we had her come home. Every relative had made a list of grooms, and she was trying to choose the best partner for herself. We thought she would get married this year.”

Srividya has been fighting dengue, but it is taking over her body

For 3 days, Srividya’s condition further deteriorated, and the family was referred to Manipal, Bangalore. The urgency for treatment outweighed their anxiety about not having enough to afford a private hospital.

“As soon as we reached, she was admitted to the ICU. She had a high fever. She was on the ventilator. So many machines were around her with wires and tubes going through her body. They said her lungs were filling with fluid, and kept working on her all week.”

It has been a month, and these parents are fighting to save their daughter

It has been almost a month. Srividya’s body has suffered a shock from dengue affecting her lungs, kidneys, and metabolism. She has now been shifted out of the ICU. As she needed tracheostomy for ventilation, Srividya is able to speak. She is feeling depressed and hardly ever responds to her parents.

“My daughter is lost in there. I keep thinking I might lose her any time. The worst part is, this is a fever. I just want her to get better now. Work, marriage can all come later. Just let her stay alive for me, that is enough.”

Srividya’s younger sisters are studying. They are not aware of her condition. The parents are here on their own without much emotional or financial assistance. Ramesh has spent over Rs. 5 Lakhs on her treatment so far, and it is all that he had. Her outstanding bill on 31/08/2017 was Rs. 11,70,100. She needs 7-10 more days of hospitalization and the total cost of her treatment may come up to Rs. 15 lakhs.
She was just getting started on living her dreams. Your contribution can give this young woman her life back, and help a father through the most difficult situation he could ever face.
Contribute now to save Srividya

The specifics of this case have been verified by the medical team at the concerned hospital. For any clarification on the treatment or associated costs, contact the campaign organizer or the medical team.
Click here to contribute to Srividya or for more details on this campaign.
Donate 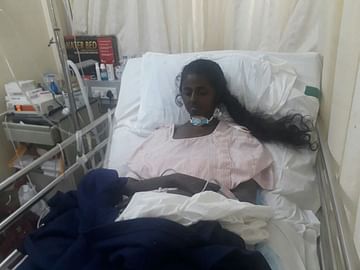 Help Srividya Who Is Under Critical Care For Dengue

She needs your help to come out of ventilator support after being severely affected by dengue.