This Mother Is Struggling All Alone To Save Her Son From A Failing Heart | Milaap
loans added to your basket
Total : 0
Pay Now

“I don’t have words to explain what we have been going through for the last 14 months” says Sourish’s mother who has now moved to Delhi with her son and daughter(6yrs) from Mathura because Sourish is going through a long-term heart treatment.

Sourish was first taken to a doctor when he was three months old, he would occasionally turn red, his body would stiffen up while other times he would start breathing heavily while travelling or casually running around. Sometimes kids have a hole in their heart and that’s when they show such signs, mentioned one of their relatives which was followed by doctors telling his parents that something is extremely wrong with his heart. His heart’s left and right atrium are connected to the same ventricle(DILV)

They were then told that he would have to go through a series of three major surgeries and one of them was done immediately since they were already late to detect this condition.

His doctor, friends and relatives put together the entire amount required for the treatment and a PA band was inserted to improve blood circulation in this body.

“Jaise kapde chotte hote jaate hain aur bachcha bada hota jaata hai na, waise wo band chotta hota ja raha hai” (Just how the body starts growing and the clothes don’t fit anymore, the band that was inserted is no longer helping) was told to his mother by the doctor, to explain the need of the next surgery, an open heart surgery(GLENN procedure).

Sourish has been only consuming blended food for the last 13 months and has not been gaining considerable amount of weight.

For his condition, surgery is the only option. Oral medication cannot help with such a rare condition, “rarest of rare” corrects Poonam, his mother, who has now researched a lot about it.

Poonam Kaushik is living with her mother in Delhi, she has tried reaching out to a number of charitable hospitals but none of them are willing to do a major surgery like this one because of the risks involved. He needed the surgery a couple of months back but because of their financial condition he hasn’t been able to. Now, Sourish needs this urgently.

Sourish needs your support to function in a healthy way. 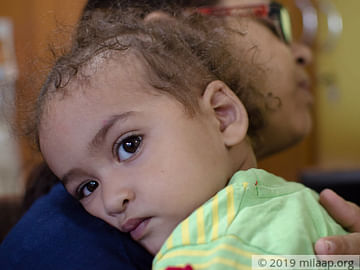 Sourish Needs An Urgent Surgery To Live, You Can Help

He was supposed to get treated a couple of months back but I couldn't afford the surgery. Please...

UPI: givetomlppoonamkaushi1@yesbankltd (Copy to clipboard)
Or
Click here to read the instructions before you make a bank transfer.

Thousands have successfully raised funds on milaap, start your own fundraiser