In Less Than 3 Hours, This Boy Was Left Completely Paralyzed By A Fatal Disease | Milaap
loans added to your basket
Total : 0
Pay Now

In Less Than 3 Hours, This Boy Was Left Completely Paralyzed By A Fatal Disease

Shares
Shares
Share on whatsapp
It was a cold January night and it was pitch dark outside when Malati and Biswajit held their 7-year-old son, Soumyadip's limp body and carried him to the ambulance that was waiting outside their home. They were taking him to Kolkata in search of a cure - the little boy’s entire body was paralyzed in less than three hours but the parents had no clue as to why.

Soumyadip was having loose motions on that fateful day - Malati and Biswajit thought it’s because of that ‘chaat’ (spicy street food) that he had eaten from outside his school. They gave him medicines but when he didn’t get better, they took him to a doctor.

“Doctors said that it’s just the weakness from the loose motions and he should be fine by the night. But by midnight, Soumyadip told us that he can’t move his arms and legs, he can’t even feel them,” - Malati, mother.

“We didn't realise that his weakness was the first sign of the disease. In Kolkata, they immediately did an MRI scan only to tell us that my son has a disease where his immune system has attacked his nerves. It is because of this disease that his entire body has been paralysed. We have never been more scared,” - Malati.

Soumyadip has Gullain-Barnes Syndrome - the weakness that the boy complained of was not because of the loose motions but because of the rare but serious autoimmune disorder. His parents are now regretting the fact that they didn’t pay much attention to the first signs of the disease.

He's been on ventilator support for more than a month now

It's been 45 days since Soumyadip has been in the ICU. He opens his eyes and looks at his parents, bats his eyelids but can’t move an inch of his body. He can’t even breathe on his own. Malati and Biswajit think about how energetic he used to be. Looking at their son’s paralyzed body, they can’t hold back their tears.

“I am salesman at a jewelry shop in Bandel, West Bengal and make about Rs 6000 a month. With my salary, I don’t know how I will afford my son’s medicines and injections - together they cost almost Rs 3 lakhs. Along with this, he needs to stay in the ventilator support also - I would need Rs 4 lakhs for that. Without help, I will never be able to arrange for it,” - Biswajit (father).

Waiting outside the ICU door, Malati and Biswajit are spending each moment fearing they might lose their 7-year-old. A generous contribution from your side can go a long way to help these parents save their son. 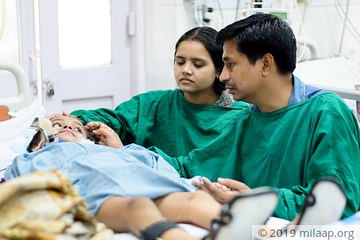 Soumyadip Has Been Paralyzed In The ICU For 45 Days Now

He can't move or feel his arms and legs, he needs your help to recover.