Only 2 Days Are Left For This 15-Year-Old To Fight The Blood Cancer That Is Killing Him | Milaap
loans added to your basket
Total : 0
Pay Now

You are sending a message to
Sourav Roy
Go back

Nowadays, I only see my teenage son, Soumodeep through the glass of the BMT ward. I have never felt so distanced from him. We didn't know for how many days the cancer cells in his body were multiplying until  now when were told that if we don’t do his transplant in the next 2 days, he will die. Although he is a very brave child, cancer has made him very weak,” Subrata, Soumodeep’s father.

Soumodeep's cancer did not manifest any visible symptoms at all

Unlike most of the cancer patients, Soumodeep never had a visible symptom. Only a week before he was diagnosed with cancer, he had a severe stomach ache. A month before he had become unconscious while returning back from school but Subrata and Sulata could never imagine that all of this is because Soumodeep had cancer.

“In April, he suddenly had a fever. The only reason we were concerned was that his fever was not going away even after 5 days. We took him for blood tests. The doctors immediately knew something wasn’t right. When the local doctor referred to an oncologist, I started getting worried. And when it was confirmed that our son had this dreadful disease, I felt a certain heaviness weighing me down that is still present to this day.”

15-year-old Soumodeep has acute myeloid leukemia, the type of blood cancer in which the cells multiply very fast and spread across the body. Since the detection of the disease, Soumodeep has become very weak. He is feverish and vomits every now and then. He can’t even stand the smell of food. Without the bone marrow transplant, it will be very difficult to save him now.

“There have been times when Sulata and I have fallen very weak, times when we have cried. But what surprises me the most is our son's strength and willpower. In the past 5 months, I have never seen him break down or cry. He’s growing up and he understands everything better than I do. He reads his own reports and tells me that ‘Baba (father in Bengali), I know I am very sick. But you don’t worry, I will become better’. For a child of such a strong will to live, I can’t give up.”

Soumodeep has been undergoing chemotherapy for 5 months now. Subrata had lost hope when they were told that they would have to wait for 8 months for a bone marrow transplant. The young teenager didn’t have much time to wait.

“ My wife, Sulata hasn't left her son's side in all these months. As we are not allowed inside the ward now, she keeps standing outside. She tries to be very strong, but tears up every now and then. Soumodeep is the closest to her. She feels that if she goes out of his sight something might happen to him. It's difficult to take her away to eat and sleep.”

Even after borrowing too much, these parents are struggling to save their son

Subrata has already spent Rs 15 lakhs for his son’s treatment. Few of his villagers and relatives have helped a lot which has helped them get through the treatment so far. Even his relatives have run out of money to help save Soumodeep. There’s no way, he will be able to arrange a huge sum of Rs 25 lakhs. This young boy has only 5 days left to get a life-saving transplant without which he will not be able to survive.

“I have a very small plot of land in our village in Bardhaman, West Bengal. Farming is very unreliable. As we harvest rice, sometimes we reap good crops and at other times they get destroyed and I incur a huge loss. Also, farming can be done only for a few months. I try to save as much as possible. I tried working in a mill too. For the past 4 months, I have not been able to work. I have only been running with my son, trying to save him.”

15-year-old Soumodeep is suffering from a type of blood cancer that is spreading rapidly and will kill him without an urgent transplant. He needs the transplant in the next 2 days. His father is his donor. In spite of spending everything he had and borrowing from friends and relatives, his father, Subrata has nothing left to save him.

Your support will help this teenager get a second life. 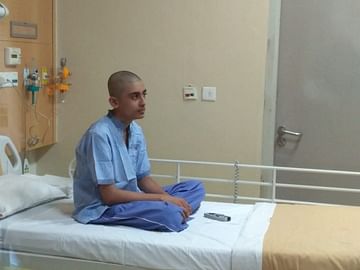 This young teenager's cancer is killing him, he needs urgent help

Soumodeep's cancer is spreading rapidly and he has only 5 days left for a transplant.