This Mother Is Determined To Save Her Son From His 6 Year Long Battle With Cancer | Milaap
loans added to your basket
Total : 0
Pay Now

You are sending a message to
Vikas Chopra
Go back

"They gave us 48 hours – they almost gave up on him. But my Soham came back stronger. His will power helped him. He was paralyzed for days – his face and lower body.. but somehow he had made it. But if this happens again, he won’t survive this deadly disease. His cancer is very dangerous.. aggressive.” - Samta, mother

Soham has been through so much in the past 6 years, the pain is unimaginable. But Soham continues to smile - unaware that this time if he doesn't get a bone marrow transplant, the disease will kill him.

In the last 6 years of periodically getting treated, Soham(9) has spent countless hours in different hospitals. In 2014, when he was 2 and a half years old he was diagnosed with blood cancer. After 3 years of treatment, he was again diagnosed with a CNS(Central nervous system) relapse. He had a facial attack along with a form of paralysis for a few days in the lower portion of the body.


“But he came back feeling better and stronger, his will-power helping him come out of constant pain because of the treatment.” says his mother, who’s now his partner-in-crime, caretaker and teacher.

Post-treatment Soham slowly got better, started attending classes at school, went out to play Bat-Ball(as he calls it) until it came back, his cancer relapsed, for the 2nd time this year.

There's never a dull moment when he's around

“He doesn’t remember most of what he learnt in 2 years of going to school. Even when we are talking, he would sometimes ask me the same questions every few hours.
He’s otherwise always goofing around even during his hospital visits. There’s almost never a dull moment when he’s around except every time he gets injections,” says his mother, making sure she always smiles back at him.

Samta never lets her worry and sadness show in front of Soham. How can she when he's so positive all the time? She can't let him down, it's the only thing keeping him going.

This time, only a bone marrow transplant can save him

For the treatment, he now requires a bone-marrow transplant to be done as soon as possible. Since his little sister(5) isn’t a match and the hospital has to approach a registered donor, the cost of the operation has exponentially increased. Soham’s father works as a supervisor at the airport and his mother is a home-maker. They have spent all their savings on his treatment in the last 6 years. Soham can make it with a bone marrow transplant.

Help him fight cancer so he can finally have a healthy, happy childhood. Soham deserves the chance. 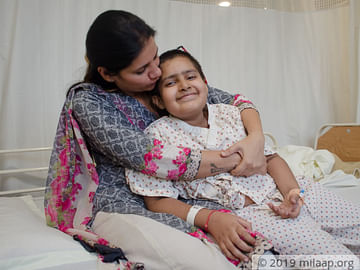 You Can Help Soham Lead A Cancer-Free Life

For the treatment he now requires a bone-marrow transplant to be done as soon as possible.