Unable To Stand up 2-Year-Old Sneha Has Continuous Nosebleeds , Wonders If Her Pain Will Ever End | Milaap
Receive tax benefits by donating to this cause.

Unable To Stand up 2-Year-Old Sneha Has Continuous Nosebleeds , Wonders If Her Pain Will Ever End 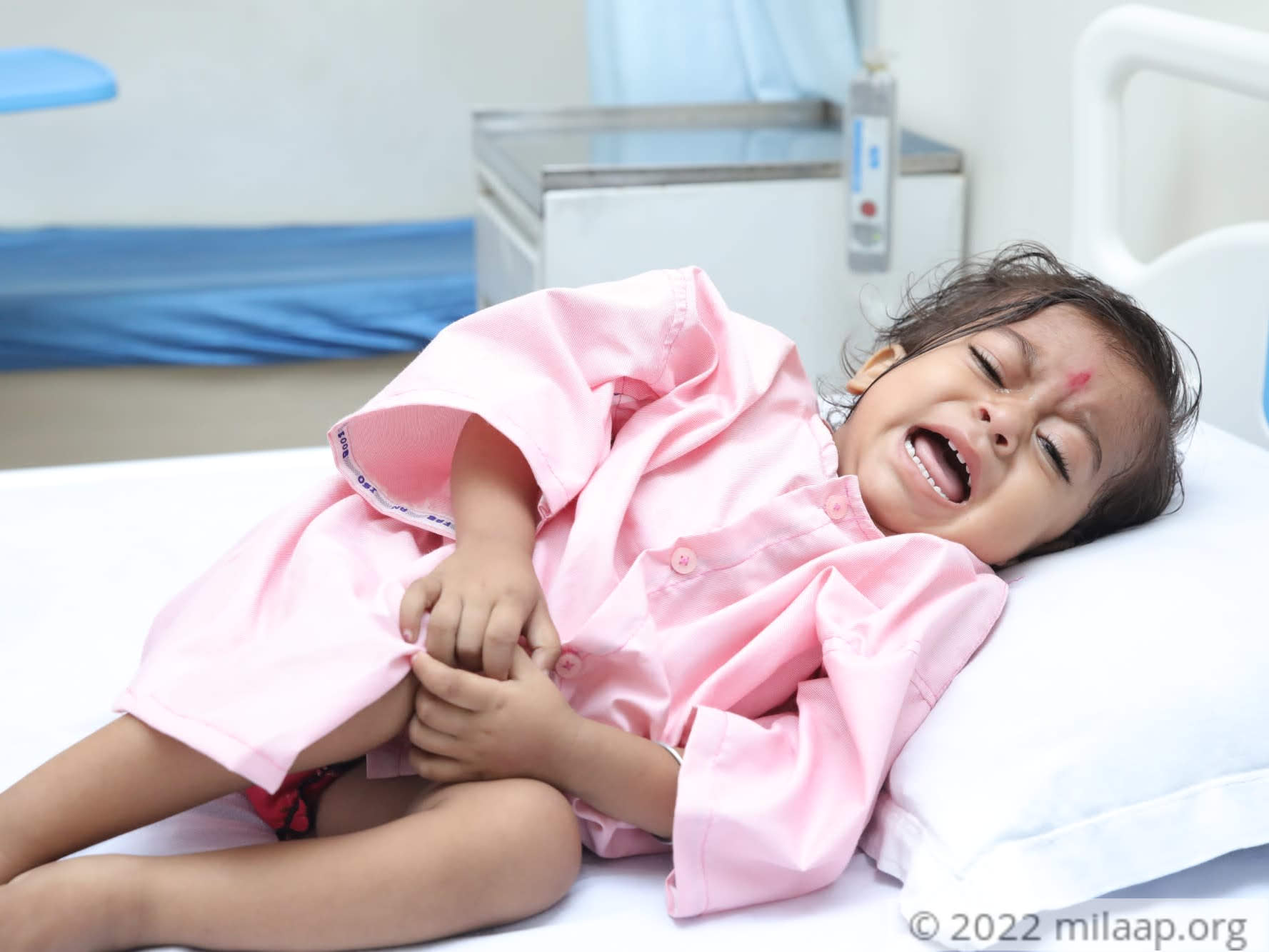 A few months back, it would take a team to handle the mischievous Sneha because her feet would never be at rest. But today, this little girl lies on a hospital bed wondering if her the pain she is experiencing will ever end.

"The past 6 months have been harrowing for my daughter. On and off fevers and low platelet levels have made her so weak and feeble that she can't even stand on her feet without losing balance.She would have nosebleeds and bleed from her gums too. At first, she was losing weight drastically but when her chemotherapy started, her body swelled up. Even the sight of food makes her throw up now. Whenever we try to feed her, she starts crying because her mouth ulcers hurt so much." - Arpita, mother

Sneha is 2 years old, now but her symptoms started when she was just a year and half. Hailing from a small village, her parents had no idea what acute lymphoblastic leukemia is and how to go about the treatment. A cancer of the blood and bone marrow, it makes the patient extremely prone to life-threatening infections because the body fails to produce enough healthy white blood cells to fight these infections.

The only way to fight this cancer now is timely chemotherapy, frequent blood transfusions and a bone marrow transplant. But all these would cost her parents around INR 25 lakhs, which is beyond their capacity. Without this treatment, little Sneha will keep getting weaker day by day and eventually lose the battle against cancer.

Seeing the hospital terrifies her, reminding her of the painful injections

"She didn't sleep the entire night after her first chemotherapy session. My wife and I took turns to pacify her in any way possible, because her stomach kept hurting. All the crying made her breathless but her pain still didn't subside. It crushed us to the core in such a way that we didn't have the heart to even think of taking her for the next chemotherapy. The hospital room is a nightmare for her… the moment she enters the room, she starts wailing. Her terrified eyes convey how betrayed she feels by her own parents, for letting her go through such pain." - Sanjib, father

Despite contributions from fellow villagers, this father is still struggling to save her

A contractual mason, Sanjib is in his late twenties. Sneha is his only child and losing her would be unbearable for him. The only thing he owned was his cow, which he had to sell to get Sneha's bone marrow test. Upon hearing the news of such a deadly disease, the villagers tried to chip in as much as they could, but it only amounted to a few thousand rupees.

"My neighbours and other villagers have treated Sneha as their own daughter during this crisis. Despite struggling to afford a meal, they came forward to help me instead with whatever amount they could. When her tests alone cost me around a lakh, I had lost all hope. Yet, they contributed just so I could take Sneha to a city hospital to save her. But when they found out that I need INR 25 lakhs now, they are heartbroken too. For us, even if we combine every village member, we still won't be able to put together such a huge amount." - Sanjib, father

At Sneha's age, the chances of recovery are much faster provided her treatment starts on time. But her parents have exhausted everything in just her tests and 2 chemo sessions. With no option left, Sneha's treatment has been halted midway, while her parents frantically try to arrange the remaining funds. Only with your support now, can they save their loving daughter.