The Only Gift This Boy Wants For His 10th Birthday Is To Be Cancer Free | Milaap
loans added to your basket
Total : 0
Pay Now

“It is not easy to fight cancer at only 6 but my son, Shreeyan, did it successfully. He returned as our healthy boy. For the last two years, I have been celebrating the day he was declared cancer-free just like his birthday because it was nothing less than Shreeyan’s rebirth. We thought the fight was over. But in July 2018, his cancer relapsed and this time deadlier than before.” - Soumi, Shreeyan’s mother

Shreeyaan’s platelet reports show a 91 percent blast in his marrow. His healthy cells were destroying itself internally. His night fever and knee pain had bed-ridden this active boy.  He needs urgent treatment to beat cancer but his family is struggling to afford it.

He needs 1 more injection and then a bone marrow transplant

Doctors have prescribed Immunotherapy for Shreeyan. But then that's not the end of his treatment. He also needs a bone marrow transplant.


"With each passing hour, my son is struggling to survive. I was pregnant at that time and all bad thoughts started crossing my mind - what if Shreeyan never gets to see his sibling?” - Soumi, mother

Sudarshan and Soumi have already taken a bank loan for Shreeyan's treatment which they are yet to repay. With the medical bills increasing each day, they had no option but to sell off their land and borrow from their colleagues and relatives. Even then they are running short of the required amount to complete his treatment successfully. He also needs an urgent bone marrow transplant but the only thing coming in between his survival is the lack of funds. Even after spending about Rs. 40 lakhs, his parents can only dream of saving Shreyaan as they cannot arrange 16 lakhs on their own now.

“I want to live only because I want to meet my brother - Snehaan again. We are like Tom and Jerry. When he was in my ma’s tummy, I used to talk to him and sleep while hugging him. My little brother also loves me very much. When he was 8 months, the first word Snehaan spoke was ‘dada’ (brother) instead of ma or baba. I have not been able to see him for many months because doctors tell me that it is not good for babies to come to hospital. That is why I want to get well soon and go home for him. I don’t know about my future but I can dream” - Shreeyan.

“I am a police inspector but when Shreeyan calls me ‘ baba’, I just give in and can’t be strict with him. He calls me his Teddy Bear. My son has never asked me for any fancy toys ever in his life but this time he asked me for a gift. A gift to get cured before his 10th birthday in November but I am struggling so much with funds right now that what if I can’t fulfil my son’s only wish from his baba ? - Sudarshan

Please come forward to help us save Shreeyan as he is fighting so hard every day to see another day. The Bone Marrow Transplant can give him a new life again. He has braved cancer once and with a generous contribution from you all, he can do it again and get back his happy childhood. 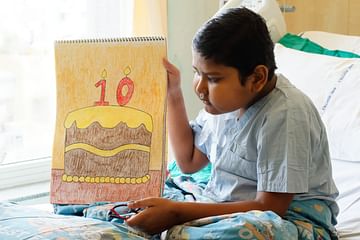 Relapsed blood cancer is making Shreeyan count every breath of his

UPI: rzpy.givetomlpmr000000002@hdfcbank (Copy to clipboard)
Or
Click here to read the instructions before you make a bank transfer.