23-Year-Old Medical Student Is Paralyzed Because Of Cancer And Won't Survive Without Urgent Treatment | Milaap
loans added to your basket
Total : 0
Pay Now

You are sending a message to
shouvikbiswas446
Go back

"He turned 23 yesterday. When I wished him, he forced a smile, trying hard to hold back his tears. I broke down. I can't see him going through this trauma. I'm afraid that he is slowly giving up. Even before we could come to terms with his cancer, he became paralyzed. The whole world seems to be against us. Now he is recovering from paralysis and responding to treatment but the pain is just overwhelming."- Chandra, Mother.

Shouvik had a painless swelling in his neck, but it turned out to be the unimaginable - Cancer

Shouvik was doing his 3rd-year medical course. His parents Krishna and Chandra were waiting for him to get his degree and become a doctor. Little did they know that a dreadful disease would threaten to shut him down. A year ago, Shouvik suddenly fell sick and had persistent fatigue. He also developed a swelling in his neck but it was painless. When it started itching, they knew it was dangerous.

"As a medical student, he knew that his scan reports would reveal terrible news. Even then, what could prepare a boy in his early 20's to accept that his life is at risk?  He asked us to be strong and he kept consoling us saying that everything has a cure but when it was labeled as 'cancer' and when the doctor pronounced that terrible word we were completely broken. Since then, he pretends to be strong in our presence but I can feel my son, his pain is mine as well." - Chandra.

Shouvik is diagnosed with Hodgkin's Lymphoma, a cancer of the lymphatic system, which is a part of the immune system. Cells in the lymphatic system grow abnormally and may spread beyond it. Within a short period of time, his condition became critical. He couldn't get up from his bed and eat anything. The bed sores he developed over a year made it even worse.

"We started the treatment immediately, we were prepared to lose anything but not our son. He had two surgeries for the swelling of the nerve and 12 chemo therapies but everything had failed him. He was not responding, he became totally inactive and was lying lifeless. Still, he did not complain about anything. He thinks about us more than himself." - Krishna, Father.

Shouvik before the diagnosis of cancer

All the medicines and injections have taken a toll on his physical and mental health as well. He is prone to urinary infections and his immune system has become very weak. His parents felt completely lost when medications failed him but their prayers were answered finally when the doctors said that his condition is improving. But their financial challenges continue to grow. Shouvik's father who works as a supervisor in a government office has already spent around 50 lakhs and he needs 40 lakhs more which is beyond his means.

"We got new hope when doctors said that he has started responding to the treatment, it is truly a miracle. He had to go through the painful chemotherapy and injections all over again from scratch. He needs a bone marrow transplant as well. Doctors are hopeful he will recover if treatment continues but we have already exhausted everything. I feel terrible, now my son has a chance to live but I'm failing him. I'm watching him going through the pain helplessly." - Krishna.

23-year-old, Shouvik, a medical student suffers from dreadful cancer. He has been through excruciating pain for the past 1 year and paralysis have left him completely helpless. He is responding to the treatment and has a good chance of recovery if the treatment is continued but it is still a long way to go. He needs intensive chemotherapy cycles and a bone marrow transplant to recover completely. His parents cannot afford it. Shovuik's college and friends have helped so far. Now they need your help to save their only son.

Your kind contribution will save this 23-year-old's life. 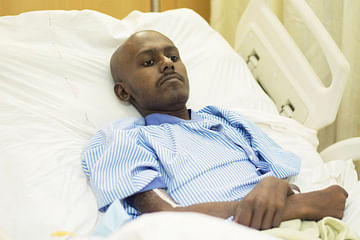 Without An Urgent Bone Marrow Transplant, Shouvik Won't Make It

He needs chemo and a transplant to recover. His parents are struggling to save him.