4-Year-Old With Brain Tumor Prays To God Every Day To Take Him Away From The Hospital | Milaap
loans added to your basket
Total : 0
Pay Now

You are sending a message to
Rushikesh Torawane
Go back

"He used to ask us why his eyes look different and why he is not going to school like other kids. We tell him to pray to God to bless him and make all his wishes come true. Since then, he has  prayed every day to not go to the hospital again because he fears injections. We were hoping that his prayers would come true one day but his life is confined to the hospital again because of the tumor in his brain. He cannot even speak properly now and he is fed through tubes." - Dipali, Mother.

His parents blame themselves for his worsened condition

Shlok had just started going to kindergarten. He was active like any other kid and did not have any health issues. Suddenly, he started complaining of neck pain. One day, he felt giddy and nearly collapsed on the floor. They rushed him to the hospital and were shocked to know that he has a tumor in his brain. He had an urgent surgery to remove the tumor.

"After the surgery, he got squint eyes. The doctors said that there is a shunt in his brain to control the pressure and it can't be removed until he recovers completely. We had to start with chemo and he couldn't bear the pain. I regret not taking him to hospital earlier, maybe his condition would not have worsened." - Dipali.

Shlok, before the disease took over him

Just when they thought he would recover, he became unconscious

It has been a year since Shlok went to school. He steps out of the house only when he has to go to hospital for chemo and check up. He has completed six chemotherapy cycles. He was slowly getting better and his parents hoped that one day, he can live a normal life but unfortunately, he fell sick again, he had high temperature and on his way to the hospital he became unconscious. Doctors said that he had a block in the shunt and it had to be removed and fixed again.


"He gained consciousness only after the shunt was fixed again but he became extremely weak. He is now fed through the tubes and he can have only liquids. He has no strength to even to talk. He needs prolonged treatment." - Dipali.

Rushikesh is an assistant professor in Shri Pramod Patil Junior College, Nashik. He has been hired on a contract basis and this is not a permanent job. He earns Rs 20,000 per month.  He has spent 20 lakh for the treatment by borrowing from his friends, relatives and selling their jewelry. He is already neck deep in debts and cannot ask for help anymore from his close circle. He needs 11 lakh more to continue his son's treatment.

" I do not know how we managed to come so far, everyday is a struggle for us. Just when we got little hope that my son would recover, it became worse. Without your help, we could lose him."

4-year-old Shlok is battling brain tumor. This little boy was hopeful that he would go to school one day like other kids his age but now he is fighting for his life. He needs prolonged treatment to survive. His parents have exhausted all their sources and they need your help. 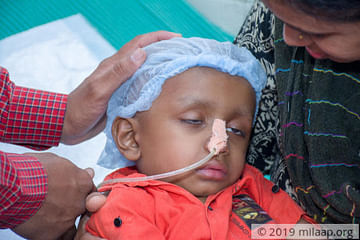 Despite Surgery, He Is Still In Pain And Needs Continued Treatment To Live

He is fed through tubes now and cannot even speak properly. He needs your help to survive.