This Poor Girl Cannot Sleep At Night Due To Extreme Pain In Her Stomach And Vomits Blood In The Morning | Milaap
loans added to your basket
Total : 0
Pay Now

"We have tried every other treatment. Nothing has helped. She will die within the month if she does not get a transplant immediately." - Raju

For 3 years, Sharanya has been battling liver disease. That is almost half her life. Every day, her parents have lived in fear of losing her, especially when she vomits blood in the mornings. They hoped the treatment over the past year would help. Today, Sharanya's condition is rapidly deteriorating. She immediately needs a liver transplant.

When she was just 5 years old, Sharanya complained of ache in her leg all the time. A few days after she was treated for the pain, Krishnamraju received a call from her school. His daughter had a high temperature. He took her to Hanamkonda, Telangana. A day after she started taking medicines for the fever, she began vomiting blood. Again, that symptom was treated. This cycle continued for a year.

"Someone told us to take her to Hyderabad where they finally found the problem.10 times she had that endoscopy treatment. A part of her intestines also burst. She still gets blood vomitings. Now it has increased from once in 2 months to once in every week. She needs blood transfusions every week because of blood vomitings. She had blood transfusion for like 100 times till now," - Raju

Her only chance to a cure is a liver transplant

Sharanya was diagnosed with Portal Cavernoma. The vein that brings toxic blood from the intestines to her liver is blocked from a clot. In extreme cases, it causes a fluid backup in the stomach, and bleeding in the food pipe. While emergency endoscopic sclerotherapy helps treat the bleeds, it cannot solve the problem. Sharanya was on medical management for over a year and required several sessions of sclerotherapy. The bleeds could kill her if she does not get a liver transplant.


"Every few hours, she holds her stomach and rolls in the bed crying out of stomach ache. She ends up staying awake all night, crying. In the morning, she will vomit blood. Our 5-year-old son is so scared that she will die." - Saritha

At 5 years of age, she used to babysit her younger brother all by herself

Raju is a plumber making Rs. 500/day when he has a job. His wife, Saritha works on the farm whenever Raju does not have a job so they can have a steady income. Raju travels to Hanamkinda from Pegadapalli every day look for work. With no parents at home, Sharanya would care for her younger brother all by herself. She also never missed finishing her homework.

"Now she does not go to the school anymore. She wants us to carry her all the time. She cannot be left alone because she falls unconscious. She needs blood transfusions every week because she is losing so much blood by vomiting." - Saritha

"We have done this once already. We sold off all my wife's jewellery and took all the money we saved and paid Rs. 2 lakhs for the treatment last time. That was not enough, we needed more. People helped us through Milaap. Now my daughter is in a critical condition. We sold our house, took loans and got s. 6 lakhs for blood transfusions, medicines and the endoscopy. Now, we do not eat so we can feed our children. Saritha also cannot work as she needs to take care of Sharanya." - Raju

In 2017, Raju could not afford Rs. 4 lakhs for medical expenses. His financial condition has only gotten worse since then. Today, he risks losing his daughter if he cannot come up with Rs. 18 lakhs for a liver transplant. You can help him save his daughter permanently this time. Save her from this pain. 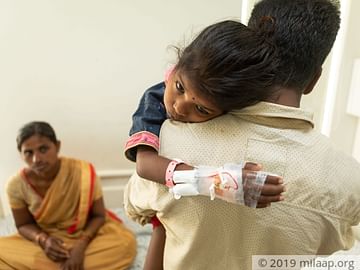 Sharanya Can Only Survive With A Liver Transplant

Donors through Milaap, helped save her two years ago. Today, she needs your help again.