You are sending a message to
Chile Family
Go back

Shantanu Needs Your Support To Fight This Traumatic Brain Injury

Shares
Shares
Share on whatsapp
24-year-Shantanu had a good life. He had recently completed college and was working with a private firm. A travel fanatic, he would save a little per month and plan trips to places he could afford. He didn't have much in terms of money, but his zest for life made up for all the monetary shortfall. When you're 24 and thriving, you hardly ever think about what crossroad might the life bring you at tomorrow. What happened next to Shantanu came as a violent shock to this young, carefree heart and left him grappling for life in the ICU.

On 9th July 2017, 24-year-old Shantanu met with an accident while traveling on a bike with his friend. The incident took place near Kharghar when his friend lost control of the bike and skid for at least 100 meters. Shantanu, who was riding pillion, bore the maximum brunt of the fall. He, along with his friend was lying on the pavement for close to 30 minutes before any help came to them. They were put inside a vegetable truck and taken to the nearest hospital. While Shantanu's friend experienced minor fractures in his arms and legs, Shantanu was finding it difficult to even breathe. The doctors told the family that their son had barely 2% chance at survival.

Shantanu was declared as good as dead

While the doctors had given up all hope, the family knew that they had to do everything in their power to get their son better. This is why the family decided to shift Shantanu to another well-know hospital. He was kept there for close to two weeks before the family realized that Shantanu couldn't get any help there as well. He was declared as good as dead. That is when they decided to take Shantanu to Bombay hospital. Thenafter, he underwent a successful craniotomy and is scheduled for two orthopedic surgery. He is no longer on the ventilator and is showing improved movement of limbs. However, his brain is still not under his complete control and the doctors are planning to keep him in the ICU until that situation is rectified.

Shantanu's father, Pramod Chile, is a retired mill worker and his mother, Poonam Chile is a housewife. His elder brother is married and has a kid. Shantanu was usually the one who looked after his parents as his elder brother found it difficult to manage the entire family.
So far, the family has spent close to 10 lakhs on Shantanu's hospital bills and are now finding it difficult to arrange for more. They have exhausted all of their savings, and have taken additional loans from their relatives for Shantanu's treatment. With such modest financial background, the family is concerned about paying off the loans and carrying out other medical requirements. They have received help from CM relief fund as well as Shantanu's office, but are still short of meeting the entire amount on their own.

Why Should You Help?

Shantanu is young and has his whole life ahead of him. Funds raised through this fundraiser campaign will help this youngster stay alive. 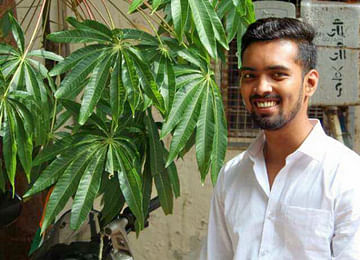 Shantanu suffered a severe brain injury and is in ICU fighting for his life.