Boy Who Is Still In Shock After Losing His Sister Needs Help To Fight Cancer | Milaap
loans added to your basket
Total : 0
Pay Now

“Saurabh and his sister Sucheta were inseparable. She was two years older to him, but they behaved like twins who did everything together – they ate together, studied together, and wherever she went, he followed – hand in hand. But after she died in a tragic accident 3 years ago, everything changed. The cheerful and active boy who filled our hearts with joy became sullen and distant. He forgot how to be happy again, and now, as a cruel twist of fate, he’s fighting cancer." - Surendra Kumar, father

An old photo of Saurabh and his elder sister Sucheta

‘We thought he was getting regular fevers because he was depressed’

Everybody in Saurabh’s small village in Giridh district, Jharkhand knew him as the highly energetic yet soft-spoken boy who was always ready to help anybody, especially the elderly. He was loved by villagers for his friendly nature. But after his sister’s death, he became depressed. He started getting sick regularly and preferred staying indoors. So one year back, when got recurrent fevers, his parents believed it might be due to his disturbed mental state, but they were wrong.


“We ignored his fever, that’s the truth. We never thought he had anything serious until his whole body started swelling up. We had to rush him to Mumbai, where he was diagnosed with blood cancer. Even while undergoing treatment, my son used to go to school as he loved to study. But from the last few months, his condition has gone from bad to worse. He will not be able to give his 12th boards this time,”-Surendra Kumar

Saurabh’s blood cancer has weakened his body, mind and spirit. His parents, particularly his mother, do not have the strength to watch him holed up in a room, not talking to anybody, and unable to even walk due to severe leg pain. Only a bone marrow transplant can save him, but his mother, Milan Devi, knows very well that they will never be able to afford it due to their poverty. She suffers from severe anxiety now, but even medicines aren’t helping her. The thought of losing her son is plaguing her constantly.

Surendra Kumar is ready to take up any job, but it still won’t be enough to save his son. He needs your help desperately

Saurabh’s family belongs to a village where farming is the main mode of livelihood, but harvest takes place only for 3 months in a whole year because of the barren nature of the land. Surendra Kumar cultivates millet and wheat in this period and for the rest of the year, he is forced to do odd jobs for a living - earning less than Rs 5,000 a month. He had to borrow money – to the tune of Rs 5 lakhs – to fund Saurabh’s treatment. Surendra Kumar and Milan Devi have already lost a child and cannot risk losing Saurabh too. But to survive, he desperately needs a bone marrow transplant, a medical procedure that costs lakhs of rupees, but Surendra Kumar does not have a single penny with him.


Saurabh, when he was well

“I am ready to work hard and do whatever it takes to save my son, but I fear I’ll never be able to arrange such a big amount on such short notice. Poor people like me can only depend on strangers’ kindness. Please help me,”-Surendra Kumar

Even before Saurabh could get over the shock of losing his dear sister, he is battling cancer. His parents do not have the means to save him and desperately need your help 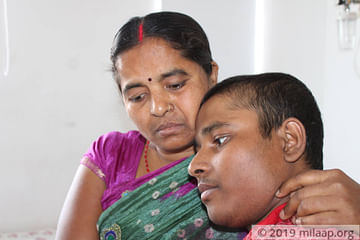 ‘He Is Weak And Can't Walk Without Limping In Pain’

Saurabh's condition is getting worse with every passing day. He needs a bone marrow transplant soon