Wife Abandons Husband With Kidney Disease, His Aged Parents Are Struggling To Save Him | Milaap
loans added to your basket
Total : 0
Pay Now

M
You are sending a message to
Manimegalai
Go back

Wife Abandons Husband With Kidney Disease, His Aged Parents Are Struggling To Save Him

Shares
Shares
Share on whatsapp
Satish is a 35-year-old who was diagnosed with kidney failure in 2014. Ever since then, he has needed to take dialysis once in two days. Because of the diagnosis, his wife divorced him leaving him alone and depressed. He can't do much and his elderly parents take care of him now.
Gunasekaran needs to take care of Satish and his mother because they are both very sick

Sathish's father Gunasekaran is 62-years-old and he is busy taking care of his wife, Kalyani, as well as his son. Already a diabetes and high-blood pressure patient – watching her only son suffer so much took a toll on Kalyani's health. At just 57, she is suffering from kidney failure as well.
Satish with his father Gunasekaran. Gunasekaran has to take care of both his wife and son who are critically ill

Gunasekaran is a retired railway employee and he has used his retirement funds for treatment so far. But he still feels very worried about the health of the rest of his family. “They both only have me. I do my best to get both of them the medical attention they need, but what if it is not enough?” he wonders.
Last week, Kalyani was admitted to the hospital. She needs to take dialysis twice a week and is unable to walk. Gunasekaran had imagined a slow, comfortable life for himself after retirement, but thing turned out very different from what he thought. He has spent all his savings and his wife and son are still sick and worsening every day.

Long-term dialysis has damaged the veins in Sathish's arms

Satish suffered from terrible backaches. He started taking painkillers for them and his family suspects this might be the reason why his kidneys suffered damage. He was diagnosed with Chronic Kidney disease and which means his kidneys are damaged and have completely stopped functioning.

Satish has been taking dialysis for the last three years. By now, his veins there are so damaged that now he needs to take dialysis from his chest. The procedure is exhausting and he has just one day before he needs to submit himself to painful dialysis. He has no energy left for anything else. Only a kidney tranplant will end Satish's suffering.
Satish is his parents' only child and so far on his treatment alone, Gunasekaran has spent 25 lakhs. For the transplant he has to arrange another 7.5 lakhs and it is an amount he knows he will not be able to raise. He has applied for government aid, but every day spent waiting is one more day of uncertainty and pain for every one in this family.
Satish with his father and mother before he became sick
“We have no property or any one to financially help us. No one will lend me money at my age. I have to save my son but my situation has become a bit desperate,” says Gunasekaran. He is slowly starting to feel that no matter how much he does, it may not be enough to save his family.
Help this 62-year-old save his family.

The specifics of this case have been verified by the medical team at the concerned hospital. For any clarification on the treatment or associated costs, contact the campaign organizer or the medical team.
Click here to contribute. 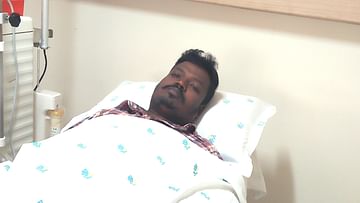 Help Sathish get a kidney transplant

Satish is his parents' support in their old age. Help him get a kidney transplant.