Nothing Can Dampen This Girl's Spirit But Without Treatment Her Blood Disease Will Turn Fatal | Milaap
loans added to your basket
Total : 0
Pay Now

Shares
Shares
Share on whatsapp
No one can believe that Sandhya has a disease that can kill her without treatment. She has so much energy and always tries to make everyone around her laugh. She is very popular in the hospital and all the nurses, ward boys, doctors stop by to talk to her. Unlike other children, she never cries when getting injections, she says, "I know this makes me stronger." It is because of her positivity and smile, she has managed to come this far

"She tells everyone that she'll go to school soon but she needs treatment for another 6 months. If we stop it, we'll lose her forever," - Mangamma, Mother.

After every test, there were only more questions

A year ago, Sandhya had frequent fevers. She complained about severe body pain and slowly turned very pale and weak, it was then her parents took her to the hospital. The doctors suggested to take to a cancer hospital but the results again were negative. When her condition became worse, they took her to a hospital in Hyderabad and another biopsy confirmed that she has aplastic anemia, a serious condition in which the body stops producing enough new blood cells.


"When doctors explained her condition we broke down but she was not afraid. She asked a lot of questions to the doctor, even the doctors were surprised. The injections were painful, she was not able to do anything that she likes but she never complained once. She easily made friends in the hospital. When she gets tired, she just sleeps, sometimes the whole day," - Mangamma

Owing to several blood transfusions, iron content in her body increased and she was hardly able to eat, her stomach began to swell abnormally. She had an urgent transplant, she is able to eat now but her fight is not over yet. She needs to get treatment for the next 6 months, without which the transplant will be in vain and she might not survive if the disease worsens.

I have nothing left with me, without help I'll lose my daughter

Sandhya's father Bhumaiah works for a meager income. They live in Ammapeta, a village in Telengana district. He was not able to go for work for 2 months as he had to take care of his daughter. He has spent around 5 lakhs by exhausting all his savings and borrowing from his friends. He has unpaid bills and needs more to continue the treatment. Without help, he'll be forced to stop Sandhya's treatment.


"She is a gifted child, she keeps us happy always, it is only because of her we are strong. She is counting on me, I cannot fail her. Please help me save her," - Bhumaiah

9-year-old Sandhya can fight this disease and continue to spread happiness all around with your help. 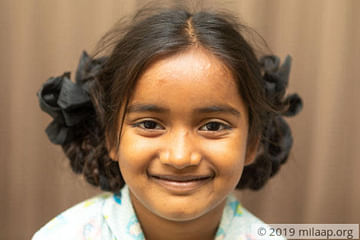 I Know Injections Will Only Make Me Stronger

Her parents have nothing left with them and they need your help to continue the treatment.