A Rare Disease Can Permanently Damage This 5 Year Old's Brain 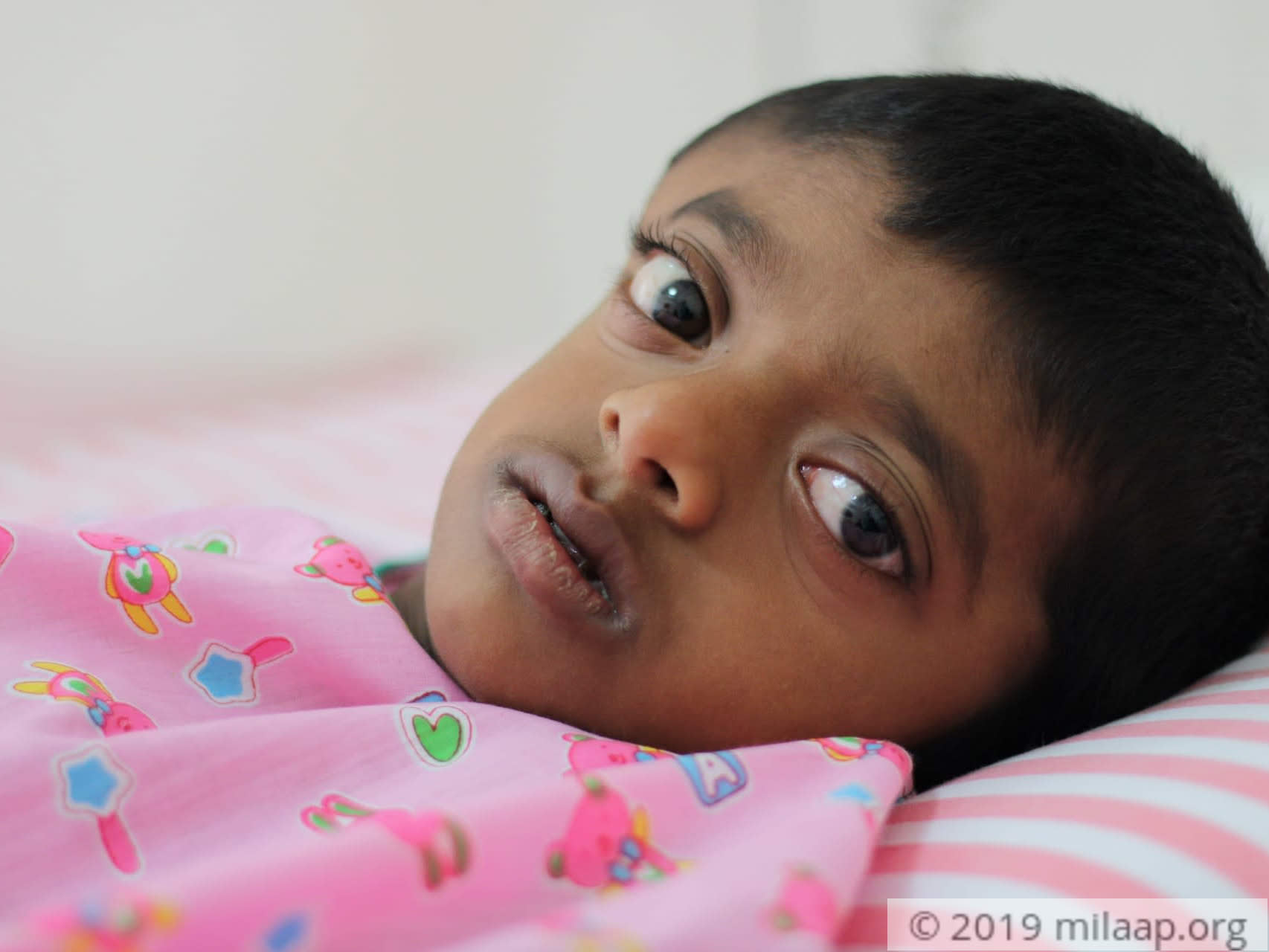 Share
“There are times when he is playing with his sisters, and suddenly he starts screaming. He comes to me and demands why their heads aren’t swollen like his. He cries and screams till he falls asleep!” – Pazhaniammal, mother
One minute, 5-year-old Sabarivasan is sitting on his mother’s lap, and in the next he lets out a shrill cry and sobs for hours till he is left with no energy. He goes back to his mother and asks her why his head and eyes hurt so. If not for his sickness, he too would have gone to school like kids his age, and played. But now, he’s locked indoors all day.

He sleeps, but with his eyes wide open

“He never closes his eyes; he can’t. He sleeps, but with his eyes wide open. There are the times we most dread. His mood swings. He screams and cries and it’s so painful to hear. We are scared to send him anywhere, unattended. When kids laugh at him, he becomes quiet for hours, before he becomes hysterical.” – Pazhaniammal.

As a baby, Sabari often fell sick but the medicines always worked. However, as he grew up, his head too became bigger. Assuming it to be the shape of his head, the parents did not fret. But when he turned 3, on his head-shaving ceremony, his head was shaved for the first time. The parents were shocked to see a huge bulge on his head, and rushed him to the hospital.

“When the doctors examined him, they told us he had a defect that would not let his brain develop. He was diagnosed with craniosynostosis. We never knew what it meant when they told us. But they said, if left this way, he might turn blind and his mental growth could be arrested to this age. He needed a surgery immediately” – Kamalakannan, father

Craniosynostosis is a birth defect which hinders the development of the brain and skull and causes deformity in the head, due to the pressure within the skull.  Without treatment, it may lead to a permanent brain damage.

Only a surgery can put an end to his struggles

"The first surgery did not go well and he needs another surgery but I...I am just a small cotton-candy vendor. Where will I get 5.5 lakhs from? This sickness has killed the child in him. I want my son for who he is and I want him to study; to play; and to do everything else he should have been doing by now. ” – Kamalakannan

These days, he goes out of town, pedaling on his cycle,  in an attempt to increase his sales. But no matter how many hours he pedals, he earns no more than Rs. 200 a day. Having spent upto 3 lakhs till now, he has nothing more to sell. He has debts everywhere and is helpless.

Little Sabari has spent most of his life screaming and crying. It's time for him too to smile, and laugh. Your generous contribution can give him that.
S
Patient Sabarivasan is 5 years 6 months old, living in Chennai, Tamil Nadu
SH
Being treated by Dr.Suresh in SIMS Hospital, Chennai, Tamil Nadu