3-Year-Old With Deadly Pus-Filled Lump In His Neck Cannot Eat, Speak Or Even Breathe Properly | Milaap
Receive tax benefits by donating to this cause.

3-Year-Old With Deadly Pus-Filled Lump In His Neck Cannot Eat, Speak Or Even Breathe Properly 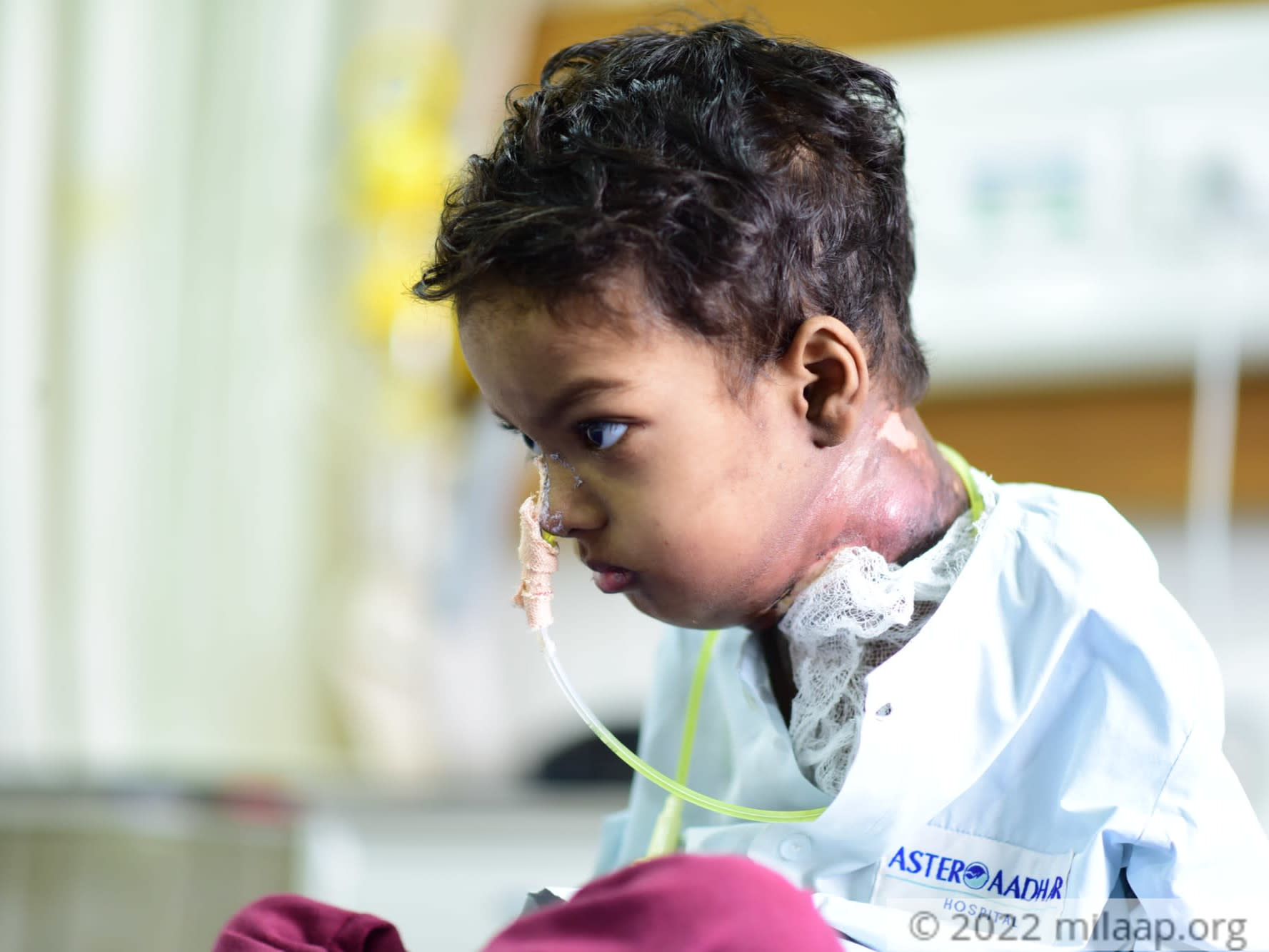 “It started as a small swelling in his neck. I noticed it first while giving him a bath. Soon, it grew into a lump filled with pus and became more noticeable. Today, it is blocking his food pipe and windpipe completely.” – Supriya, mother

Roshan was a ball of energy, like most toddlers you may have come across. He brought so much joy into his parents lives. His elder brother, Sarthak, was so proud of how he was growing up to be so loving and caring. But their happiness was short-lived, when Roshan was diagnosed with cancer.

“Cancer? Cancer in a small child? I asked the doctor these questions repeatedly. I was filled with a sense of grief, but I also wanted to know what we could have done wrong for our child to have such a fate.” - Dilip father

Roshan is suffering from a rare, deadly form of cancer called epithelioid sarcoma, which begins and spreads in soft tissue. In his case, his neck and throat have been affected. It is spreading fast and could affect other parts of the body if he does not get continued treatment.

When the lump in his neck was small and unnoticeable, Roshan did not feel any symptoms. He was getting weaker and could not play as much as before, but he remained in good spirits. But when the lump grew and started disfiguring his face, he started to notice what was happening to him. He stopped talking and would not eat solid food. Today, he is being fed liquid food through tubes.

“I miss his voice. His babbling and his chatter used to be enough for me to forget all my troubles. Today, all that is gone. My son doesn’t look like himself. I cannot tell you what we are going through as parents. I hope and pray no parent goes through this.” - Supriya, mother

He has been able to survive until now, but the road ahead looks difficult

Roshan is a brave young boy – the fact that his tiny body underwent three surgeries and many rounds of radiation therapy is proof of this. His father Dilip is a daily wage labourer, who begged and borrowed to treat his son. But he has no options left anymore. For a while, he was jobless as he had to accompany Roshan to many hospitals and, as a result, has incurred a lot of debt.

“We need for him to undergo a couple more surgeries and radiation. We have not a single paisa left with us. My old father is also forced to work to feed us. Please help us save Roshan… He deserves a happy and long life.” - Dilip