22-Year-Old Lies Paralyzed After A Fatal Accident, You Can Help Him Recover | Milaap
loans added to your basket
Total : 0
Pay Now

A
You are sending a message to
Amaan
Go back

22-Year-Old Lies Paralyzed After A Fatal Accident, You Can Help Him Recover

Shares
Shares
Share on whatsapp
Every mother goes through a hard time when her son or daughter does not return home in the expected time fearing something would have happened to him/her. She would be relieved only after seeing her child safe. Unfortunately, this mother’s worst fears came true when her then 18-year-old son Rohan did not return home safely.

The police informed that my son has met with a major bike accident.

“I will never forget that night. It was the 21st of December, 2014, a few days short of Rohan’s birthday. He went out with friends for a late-night drive. At about 3 in the morning, we got a call from the police informing us that our son has met with an accident on the highway and has been taken to the nearest hospital in a very critical condition. I was distraught hearing the horrible news. My husband was also out of town. It was just my daughter and me, who frantically rushed to the hospital.” – Rita, mother

His brain was severely damaged and enlarged.

Rohan  was taken to the hospital with a fractured skull and multiple internal and external injuries. He was in a coma for the first 15 days. After many surgeries, the doctors were able to control the internal bleeding in the brain. After days of restless efforts and prayers by his family members, Rohan was out of the coma, but the doctor had to remove his skull and keep it in his stomach as the brain was enlarged. The injury on his head paralyzed his entire body.

“This deadly accident has left my brother with multiple fractures bruises and lifelong trauma. Being from a middle-class family we have tried everything to bring back my brother. It's been four long years that my brother has been living on the bed and is in coma, where he can see everything, understand everything, but unfortunately cannot respond to it.” – Aman, cousin of Rohan.

Desmond Hackett, Rohan’s father, works in a private newspaper establishment. So far, he has spent about 25 Lakh Rupees for the hospital charges and surgeries. This has drained all his savings. He is unable to raise more funds for his son’s further treatment and has resorted to asking help.

Rohan was riding pillion. The boy who rode the bike died that night.

“My son was the pillion rider that fateful night and has come close to death. The other boy who rode the bike that night died in the accident. There must be a reason why God saved my son. But, it definitely was not to see him in this lifeless state. Rohan was a bright kid who was a great football player. We had big dreams for his future. Now, all I want is to see him on his own feet and make a life for himself even when we are not around. There would be nobody to look after him after I am gone. I cannot imagine such a life for him.” – Rita.

Rohan has a good chance of making it back to normal life with your support and contribution. 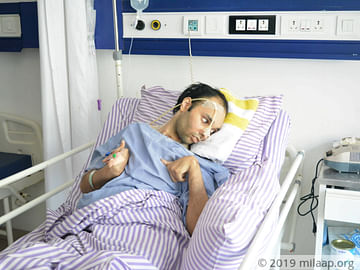 This Teenager's Life Came To A Pause 4 Years Ago, Now He Needs Help