Rare and Painful Tumor On Spine Can Kill 2-Year-Old Rohan If Not Removed Immediately | Milaap
Receive tax benefits by donating to this cause. 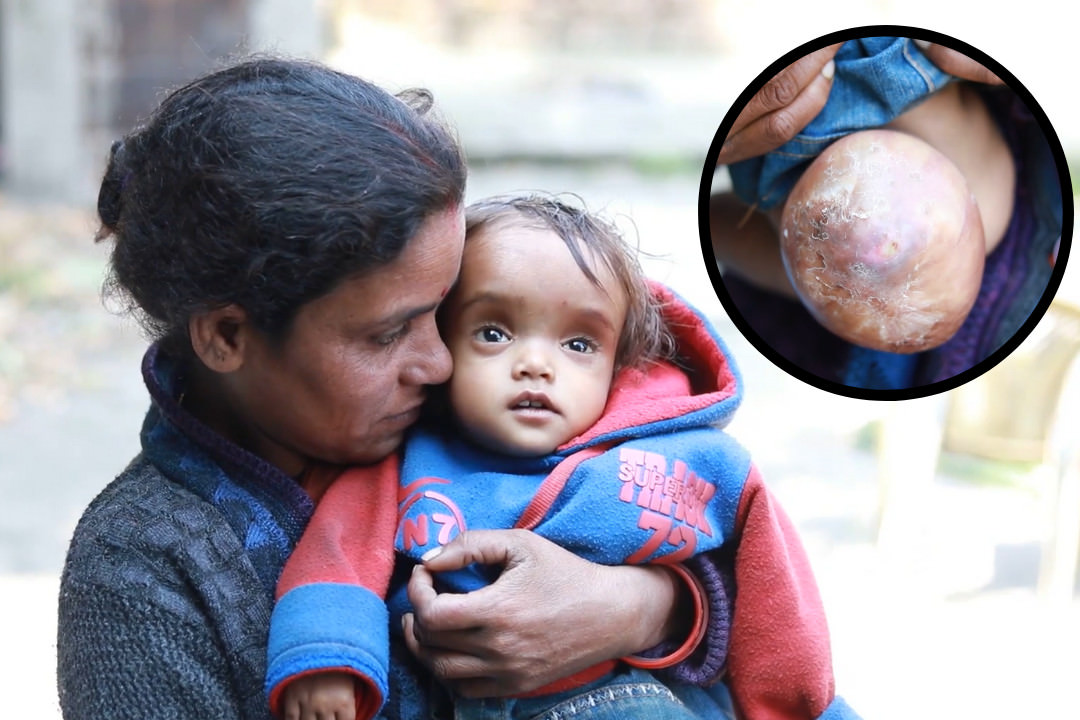 “The sight of him with that horrendous tumour makes my heart ache. I can’t help but cry. He has trouble doing even the most basic things, and can’t even sleep properly at night. But what can we do? I just want my child to get treatment and recover. But it is beyond our means, because we just don’t have the money.” - Suman Devi, mother

He has a growing tumour at the bottom of his spine

2-year-old Rohan’s woes began the day he arrived on the earth. He was born with a growing tumour on his back, due to which he has led a life of suffering and pain at such a tender age. He was diagnosed with meningomyelocele, a type of spina bifida that occurs when a baby’s spinal cord fails to develop properly while in the womb.

“At first it was really small, but when it started growing and he became more restless, we realised that it was serious. Each time we sought help, we would be left upset and disappointed because the doctors would either postpone his treatment or ask us to return home. This delay proved terrible for our baby, and his condition began worsening. Now the lump on his back has grown to the size of a ball!” - Prashuram, father

Now the size of a ball, they fear the tumour may rupture and kill him

Seeing Rohan’s sufferings intensify, with the excruciating pain from his tumour, his parents became desperate for his treatment and took to a hospital in Gorakhpur from their hometown, Kushinagar, Uttar Pradesh. Unfortunately, the doctors denied any complications and told them to return home, bringing them back to square one.

“This tumour distresses him during his sleep, causing intense pain and discomfort. Not a single day has passed where I haven’t woken up in the middle of the night to tend to him and lull him back to sleep. As the days progress, things are getting harder, and I fear that there might also a come a day where this tumour could just rupture and claim my child’s life.” - Suman Devi

Only a farmer, he’s struggling to get his son the required treatment

Even though the family struggles with their livelihood, they have left no stone unturned so that their child doesn’t miss out on his childhood and can lead a normal life. Parashuram, the breadwinner of the family, has been working tirelessly in hopes of gathering enough funds for his child’s treatment. As a farmer, he earns a daily income of merely INR 150, which is just enough to put food on table for that day.

On the other hand, Parashuram and Suman Devi also have the responsibility of providing for their family. These parents cannot go all out and put all their money on the line for their youngest son, or they won’t have enough for their own survival. With no money in hand and a meagre income, the couple took out a loan for their ailing child’s treatment, but again, they received no help, leaving them disheartened. Further, the family has insufficient resources and resides in a shattered dwelling, where water enters each time rain lashes.

“We can barely afford a meal a day, let alone his treatment. How are we supposed to get him medical help when we are struggling to get by, ourselves? I wish to see my babu (child) get better, so that he can play, run around and cause mischief like other children his age. I will only be content, when I know he is at ease.” - Suman Devi

Despite life constantly throwing curveballs at this family, they’ve gathered the courage to keep going and not give up on their child. But met with nothing but dissatisfaction each time they tried, they have been unable to get their child treated. The family is now on the verge of giving up on Rohan's treatment. They have left everything to fate and await someone who would help them in saving their child.

With the family's falling income, they seek your help to support Rohan during these challenging times. Click here to donate.
R
Patient Rohan is 2 years old, living in Kushinagar, Uttar Pradesh
AC
Being treated in Aster CMI Hospital, Bengaluru, Karnataka