Gifted 15-Year-Old Artist May Never Be Able To Draw Again | Milaap
Receive tax benefits by donating to this cause. 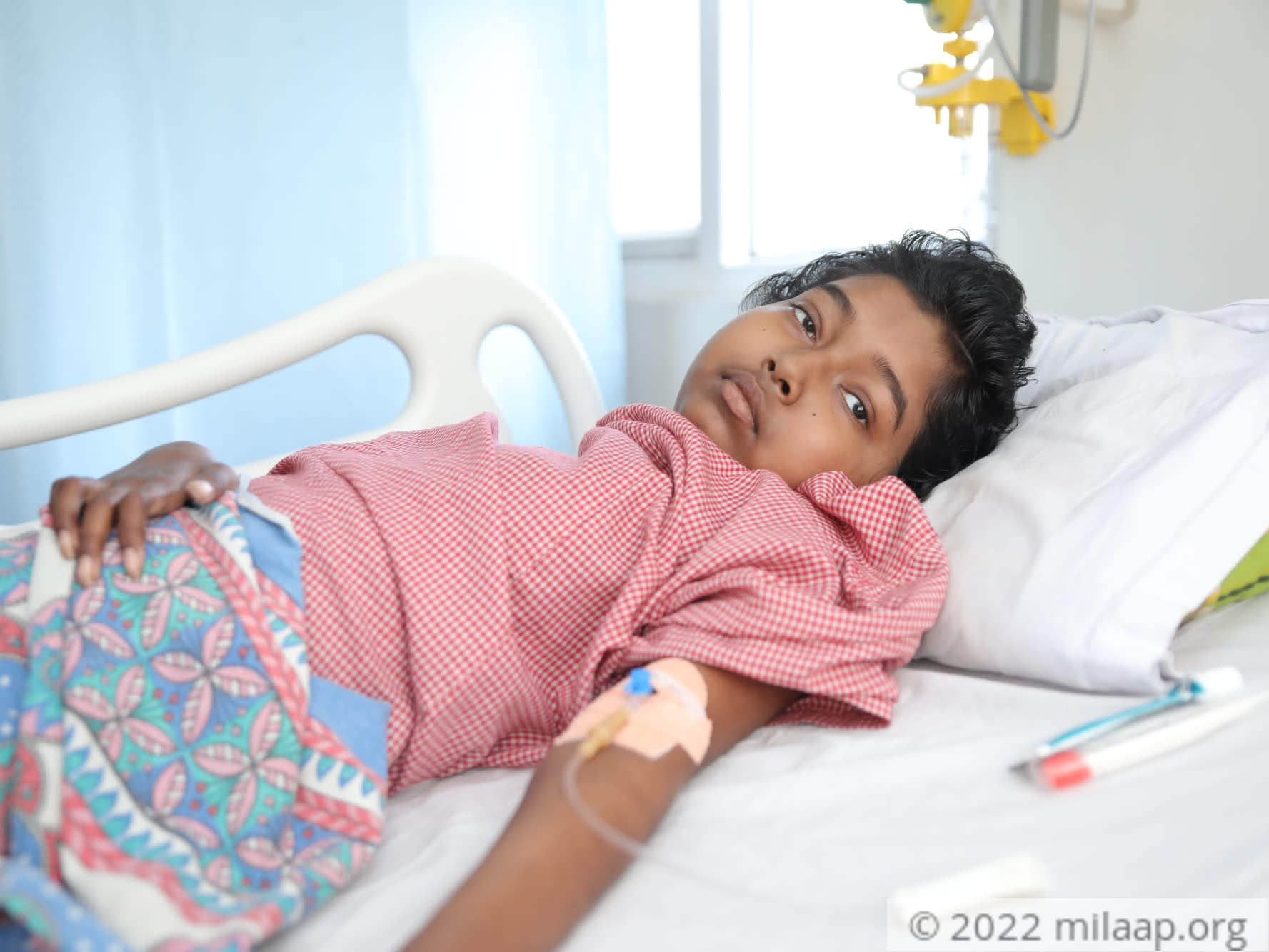 Share
They were just waiting to finish Rima's saline drip, while she was being prepared for surgery. Seeing their little girl in a surgical gown, Gobindo and Rinku had been on the verge of breaking down, but they kept strong for Rima.

"We were frantically praying for our daughter, but just moments before her spine surgery, they cancelled it because her new reports indicated that the tumor is not the actual cause of her illness. Hearing that, it felt like someone had breathed life back into my body… until the doctor informed us about her blood cancer." - Gobindo, father

They suspected a tumor in her spine, but it turned out to be a deadly blood cancer

15-year old Rima's health started deteriorating in May, last year. At first, she had lost all strength to move her limbs and later, her ears started ringing. Seeing the symptoms, her parents took her to a neurologist who suspected a tumour in her spine.

Nobody was able to grasp how those symptoms turned out to be that of a looming blood cancer, rather than damage to her nerves. But this was way worse, as all of it now pointed towards just one thing - her cancer had spread to her brain too. Even after 23 units of blood transfusions and 7 cycles of chemotherapy, this poor girl is not in a condition to move from her bed. Only a bone marrow transplant can help her get back on her feet.

Seeing her daughter bed-ridden for almost a year, Rinku tries to recall how it all started while Rima was just completeing her drawing for an art competition submission that was due the next day. But since that day, despite putting in all the effort to lift a pencil, this little artist's immense pain just couldn't let her continue her art anymore.

"That day, she was sketching and her hands started shivering. It had happened before but she ignored it and didn't inform us. In a day or two, her lines would get so shaky while drawing that she got nervous. Before we could even get a chance to show the doctor, my daughter's hands ran out of strength to even hold a pencil and soon , she took to the bed completely because she couldn't even move her legs." - Rinku, mother

Rima with all her prize-winning artworkBack to back medical emergencies, have left this electrician debt-ridden

Rima's condition has been critical now because despite multiple transfusions and chemotherapy, her bone marrow is still producing cancerous cells instead of healthy oxygen-rich cells. As a result, she has been on and off oxygen support and hardly can sit straight for more than 15 mins.

"Cancer has made my daughter totally unrecognizable and looking at her pale face reminds us of the severity with which it's still ravaging her body.Last year, all my savings got used up for my wife's surgery as had an ovarian tumor too. Being an electrician, hardly anyone requires my services anymore because of LED lights that don't need maintenance. It's been a year and I'm failing miserably to clear the hospital bills that are mounting up everyday. I am terrified about how I will lose Rima, if I don't arrange for funds soon enough." - Gobindo, father

Even though Rima tried to attend online classes from the hospital, sudden bouts of chest and lower back pain made her discontinue her studies too. With a bone marrow transplant, her chances of beating cancer are at 80 percent. But her life is now at stake because her parents are failing to arrange INR 25 lakhs that is needed for her life-saving surgery.