After Losing 2 Daughters, This Father Is Desperate To Save His Youngest And Only Living Daughter | Milaap
loans added to your basket
Total : 0
Pay Now

You are sending a message to
Farooq Sheikh
Go back

After Losing 2 Daughters, This Father Is Desperate To Save His Youngest And Only Living Daughter

My eldest daughter Shamim was admitted to the ICU with a mere cough and cold. And then on 22nd May, we were sitting beside her hoping for a miracle to happen. She couldn’t even speak her last words. She passed away in my arms and I sat there frozen helplessly. After losing 2 daughters, now I am on the verge of losing my only child.

My name is Shafiq and I have stayed in Balaghat, Madhya Pradesh with my wife Parveen and 3 beautiful daughters Shamim, Bushara, and Rabiya. But since last December, I have begun losing my children and the feeling is way more painful than words can ever express.


Bushara was the healthiest of my three daughters. While Shamim and Rabiya have been too weak and they could barely sit and walk, Bushara was the one who tried walking too. In December, she suddenly suffered from pneumonia and in just a few days she was no more.

My daughters have been suffering since they were barely 1. Rabiya was fine until she was 2 years. She has cerebellar ataxia, a condition where the body movements have no control. My daughters can neither sit or stand. They even have difficulty in speech. I don’t understand why has Allah given such a painful life to all my children.

My 2 daughters passed away because their immunity was so weak that they suffer in a mere weather change. Even after losing Shamim and Bushara, even after being broken in every possible way, I am still ready to fight for my only living daughter, Rabiya.

Since she lost her sisters, Rabiya has become even silent. She barely communicates with us. She is very stubborn and doesn’t want to do anything. She is sometimes too difficult to handle. But Parveen and I know that she doesn’t do these on purpose.

Our lives have been stuck inside the houses for all these years. The only reason we have traveled to different states is that we have visited doctors in all these states. But all we have ever got is hopelessness.

I used to work as a driver until 3 years ago. But when my daughters became sicker, I had to stay back to take care of them. It’s very difficult for Parveen to take care of our children and both of our mothers alone. Parveen’s mother has been paralyzed for 12 years now. My mother is old and needs a lot of expensive treatment. Saying that we are broken and devastated is an understatement. Rabiya needs extensive treatment to survive too.

We run a grocery shop in our house now and somehow manage to earn the basic sustenance. I have lost count on how much we have spent so far. Some relatives have helped us in the time of need. Rabiya needs special care in order to survive. Like her sisters, a simple cough and cold can kill her. She is my only living child, I can’t afford to lose her now. I hope in this Ramzaan, my daughter and every one like her is blessed with a life.

11-year-old Rabiya has been suffering from cerebellar ataxia since she was 2. Her 2 sisters have passed away because of the same problem. Now without support, her parents won’t be able to save her. The cost required to save her now is Rs 3 lakhs without which she’ll not be able to live. 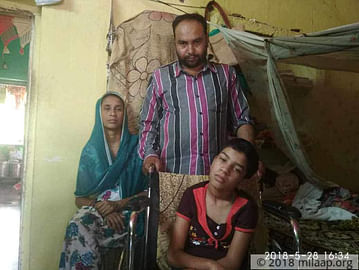 Support Rabiya to fight the disease her sisters succumbed to

Rabiya lost her 2 sisters to cerebellar ataxia and her father is now struggling to save her.