They Treated Me As Untouchable For 18 Years Because Of My Deformity | Milaap
loans added to your basket
Total : 0
Pay Now

PG
You are sending a message to
Priyanka G
Go back

“I used to hate going to school when I was a kid. Not only did all the children make fun of me, they avoided me. They treated me as untouchable. But it just made me stronger.” – Priyanka

Priyanka was born with an extremely rare condition called Plexiform Neurofibromatosis which made her left leg greatly enlarge and deform below the knee. Until she was 18, it made life very hard for young Priyanka. What had started as mockery became bullying by the time she reached high-school. Not having friends, and not being able to go out without people staring at her, could have easily turned her bitter towards the world. But it only taught Priyanka to be more compassionate towards others.

After she finished her Bachelor’s, Priyanka started a career in social work. She primarily worked with children, bringing fun and joy to the underprivileged ones in rural areas, and acceptance to the ones who were differently-abled. She even regularly took time to educate the families of the latter, to help them better understand their children’s conditions. She also frequently participated in tree-planting drives, to give all children a chance at a healthier future.


Her work and ambitions came to a halt in late 2018, however, when she was diagnosed with cancer

“I couldn’t believe it when the doctor told me I had a tumour in my leg. My whole life I had to learn to accept myself and my leg especially, because my condition had no cure. But now they were saying my leg hadn’t just been affecting me mentally, but also internally: it was actually killing me. I had no choice. To save my life, I finally had to get my leg cut off.”

“I can no longer do even small things like cook for myself, or help my retired father with any of his work, because I’m so dependent on my crutches. It hurts so much if I’m up for more than a short time. My mother died a few months ago, so my father has to do everything at home now on top of his own job working in a gym. Even though people have called me handicapped in the past, I never used to feel like so. But after my amputation... now even I'm starting to think like that."

All Priyanka wants is to be able to walk again

“I’ve never been able to run in my entire life, and now I know I'll never be able to run in the future. But all I want from life now is to walk again. I want to regain control over my life and be able to stand on my own two feet. I can only do that if I get a prosthetic leg. But it costs so much! We could never afford that much money. We’re not that rich. Just my amputation put us under so much financial stress.”

She had so many dreams

She wanted to go to Paris by 2022.
She wanted to move to a richer house by 2021.
She wanted to get engaged this year. Now she wonders if she ever will.
This young woman is watching her dreams collect dust on her wall, and is unable to do anything about it.

She now seeks help one last time, so she can get her prosthetic leg and become the strong and independent young woman she used to be.
Click here and donate as much as you can. 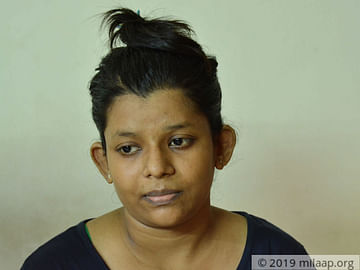 She never labeled herself as handicapped her entire life, but she has never felt this helpless.

Only a prosthetic leg can give her her life and confidence back.