Farmer’s 9-Year-Old Daughter Battling Rare Bone Cancer Needs Your Help To Beat It | Milaap
Receive tax benefits by donating to this cause. 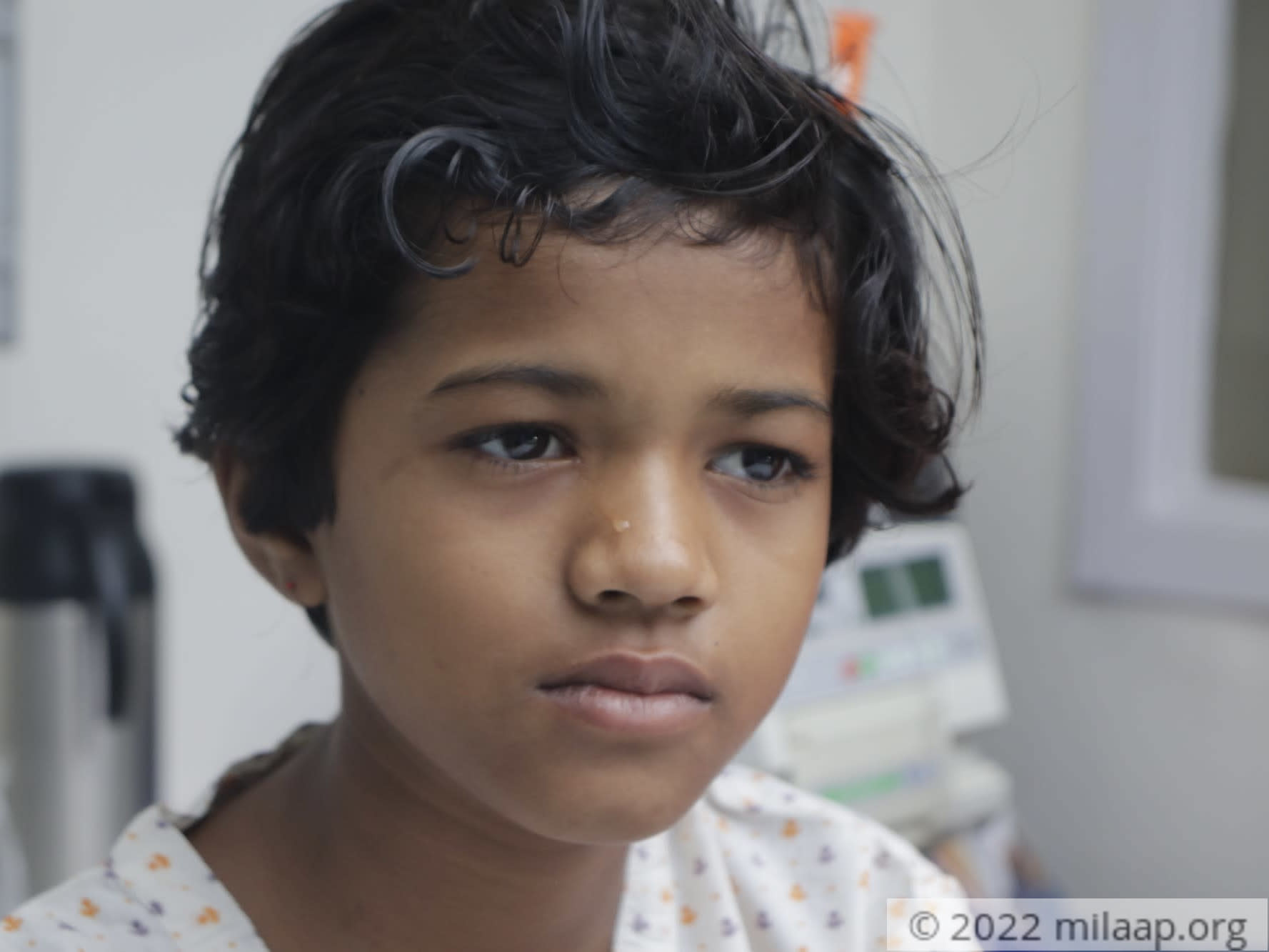 “She feels very restless and out of place in this hospital room. The child who was always on her feet and bubbling with laughter and smiles, is now confined to a bed. She sees the other children in the ward, and often tells me ‘I don’t know how I got here - in this condition.’ It breaks my heart to see her wilting away like this. I’m terrified that she’ll never be able to enjoy her childhood again.” - Sumati, mother

She had a lump sticking out of her arm, which turned out to be cancer

It was a night like any other in November 2021. 9-year-old Prema was disturbed from her slumber in the late hours, and had sought out her parents for comfort. Just as her father was patting her to sleep, he felt a lump protruding from underneath her arm.

“I was shocked to say the least, because she’d never said anything about it. When I was checking the lump, she hissed in pain and I just had a hunch that it was something really bad. The very next day I took her to a local hospital for a check-up. They took several tests and only passed it off as being a tumor. They wouldn’t give us any clarity on her condition. It wasn’t until month later, after shuffling through so many different hospitals, that we found out it was bone cancer.” - Charwa, father

She suffers from a rare type of cancer of the bone

None of the hospitals in their hometown in Jharkhand were able to figure out the cause of the lump. Finally, through word of mouth, Prema’s parents learned about a hospital that could treat her and immediately set out to Delhi, taking every little rupee that they had in hand. There, Prema was diagnosed with osteosarcoma, a type of bone cancer that begins in the cells that form bones.

“They told us that she had a tumour, which was cancerous and she would need to start treatment immediately or her life would be in danger. Although I’d heard of cancer and what it does to people, I never knew it could affect children too! We were in utter disbelief that our daughter was suffering from such a dangerous disease.” - Sumati

She needs prolonged treatment to recover, but her poor parents cannot afford it

Soon after her diagnosis, Prema was administered her first cycle of chemotherapy to kill the cancer cells and shrink the malicious tumour. Currently, she's just past her 3rd cycle of chemotherapy and needs at least 3 to 4 more rounds of the treatment, after which she could possibly undergo a surgery to remove her tumour. But, Charwa and Sumati are fraught with worry as to how to meet Prema’s medical expenses.

Only a farmer, Charwa manages to earn INR 200 on a good day and when work is available. Other days, they would have no choice but to go to bed hungry. They’re still reeling from the harsh repercussions of the pandemic, and were only starting to get their lives together again, when life threw them another curveball in the form of their daughter’s cancer diagnosis.

“Things have been very hard, lately. I barely have any work available, and with no stable income, I was already struggling to make ends meet. Now I’ve spent everything I had on my daughter’s treatment so far. Yet, it is nowhere close to the 10 lakh rupees we need for her treatment. I’m terrified. Looking at her sullen face is enough to bring me to my knees and cry. But I can’t do that in front of her. I just want to save her, but I’m failing miserably…” - Charwa

Prema longs to be able to go to school again. She wants to dance, draw and run around with her friends like she’s used to. The hospital only harbours bad memories for her, and she just wants to go back home. You can make that happen for her. The sooner she gets her treatment, the sooner she will be able to go back home, happy and healthy. Click here to donate.
PT
Patient Prema Tigga is 9 years old, living in Ranchi, Jharkhand
IA
Being treated in Indraprastha Apollo Hospital, New Delhi