This 3-Year-Old Is Slowly Dying From A Deadly Disease,Only A Transplant Can Save His Life | Milaap
loans added to your basket
Total : 0
Pay Now

This 3-Year-Old Is Slowly Dying From A Deadly Disease,Only A Transplant Can Save His Life

Shares
Shares
Share on whatsapp
Just like any other family with a 3-year-old child, Pratyush's parents were used to regular hospital visits. Nevertheless, no parent would have thought of anything serious, until tragedy struck and the family discovered that Baby Pratyush has a deadly disease - Adrenoleukodystrophy or ALD.

He was just a year old when it all started

When Pratyush was 1-year-old, his parents noticed black pigmentation on his lips and under his nails. His worried father took him to the dcotor immediately. After performing multiple tests, the doctors concluded a form of hormonal deficiency and put Pratyush on steroids. Post the medication, the child began to appear almost normal. The family thought he was getting better, until suddenly, Pratyush began developing a high fever.

“We took him to the doctor. More tests were performed, and more medicines were prescribed. But the diagnosis took almost two years to be confirmed,” said the kid’s father, Pratik Bhandare.

The kid has a rare genetic disease and it's killing him

3-year-old Pratyush Bhandare has been diagnosed with a case of Adrenoleukodystrophy, or ALD. It is a life-threatening genetic disease that most severely affects young boys and male adults. It mainly affects the nervous system and the person’s ability to understand information and carry out day-to-day function. If left untreated, the disease leads to total disability within few years followed by death.

“At first, we didn’t understand anything. Adrenoleukodystrophy is an extremely rare disease and it happened to our son. I couldn’t do anything but curse our lucks. But eventually, as I managed to grasp everything that was going around, I figured that I have to be strong for my son's sake, and that is all I am doing at present. My only concern is arranging the funds required for his transplant, now that the doctors have assured us of its success rate", said the father.

His father is an IT technician and  His mother is a home-maker. The family’s income is barely enough to cover Pratyush’s everyday medicine and frequent blood tests.

He may not get another chance to survive

For Pratyush who has been suffering from this deadly disease since he was 1-year-old, a bone marrow transplant (BMT) is the only option available.The estimated cost of the transplant is Rs 35 lakhs. As of yet, the family has already spent close to Rs 4 lakhs on Pratyush’s treatment.

“I am his father, of course I am doing everything in my power to look after my kid; to ensure his well-being. But Rs 35 lakhs is beyond my humble capabilities. I would give anything to save my son, but I have nothing left now. My relatives have been helping me to keep the treatment going, but this amount is far beyond what any of us can put together.”

The doctors have recommended the transplant at the earliest as the ailment is only making Pratyush weaker day by day.

“He’s very weak. One moment he’s playing and the next he is on the floor vomiting his guts out. Most days, he is just writhing in uncomfortable pain due to high fever. He’s barely three and should be full of energy. But his condition makes it difficult for him to get out of the bed most days"

Pratyush is just 3 years old and has a whole life ahead of him. He is in a lot of pain but he has fought well so far. With our support, this little 3-year-old baby's life can be saved. Funds raised through this fundraiser will help Pratyush stay alive.
Click here to save Pratyush. 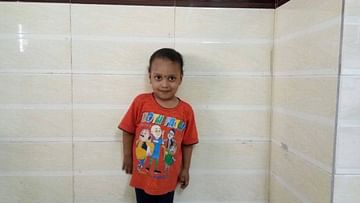 Pratyush has been suffering for the last three years.

This 3-year-old is suffering from a rare genetic condition and needs urgent bone marrow transplant.